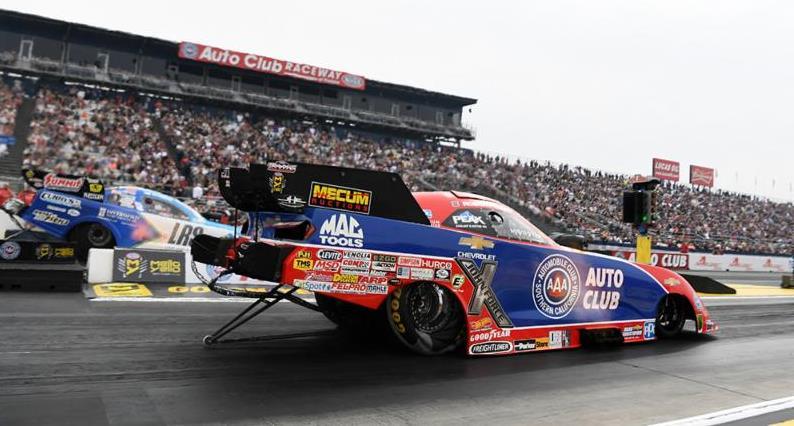 POMONA, Calif. (Feb. 7, 2018) — Robert Hight is more than ready to be getting back in the seat of his Auto Club of Southern California Chevrolet Camaro SS Funny Car at Auto Club Raceway in Pomona to start the 2018 NHRA Mello Yello Drag Racing Season. And who can blame him? He ended the 2017 season at the famed track as the world champion, the second crown of his career.

“I can’t wait to get back there and get back with the fans. We got to meet some fans over the off-season at different functions but it is not the same as being at an NHRA national event,” said Hight who has three wins at the season-opening event.

After a successful test session at Wild Horse Pass Motorsports Park outside Phoenix, where Hight branded his car with the championship No. 1, the Auto Club team is confident in their car and ready to take on the rest of the Funny Car class with a strong showing at the Winternationals.

“It would be a pretty bold prediction to say we are going to win the championship again but I definitely want to be in the hunt. My goal is really to be good from start to finish,” explained Hight who in 2017 had four event wins in seven final round appearances with a season best eight No. 1 qualifiers. “We want to win a lot of races and we want to be able to say we would be the champion whether there was a playoff or not. I think that is possible. We have a good combination that we can start the year with and carry it on. We have tested some new things over the winter but seriously, I like our combination and we have a good handle on things. I can’t wait to get to Pomona and get this season started.”

Hight qualified fifth at the 2017 Winternationals and had an early exit in the first round on Sunday. The tough start precipitated a rocky beginning to his championship campaign that saw a turn around mid-way through the year, arguably when it mattered most. The veteran driver earned seven of his eight No. 1 qualifiers and all four of his event wins in the second half of the season.

“I was fighting the reigning champion Ron Capps, the guy was amazing winning eight races throughout the season. We had our hands full,” Hight said. “There was so much more pressure. We all got through it. We did what we had to when the chips were down. We came through when the pressure was the highest. That gives me a lot of confidence coming into this season. Winning two championships in a row will be tough but that would be the coolest things because no one has gone back to back since John Force.”