What's the difference between quick and fast?

Quick refers to the elapsed time. E.T. is the time it takes the car to go from A to B and is measured to the thousandth of a second. Top Fuel dragsters can make a pass in approx. 3.6-3.7 seconds. Funny Cars can make a pass in approx. 3.7-3.9 seconds. JFR claimed the national E.T. record when Brittany Force went 3.623 seconds in Reading in 2019. The race day ladder is set based on the driver’s best E.T. from qualifying.

Fast refers to the speed and is measured in miles per hour to the ten thousandth. Our cars can go over 330 MPH. JFR claimed the national speed record when Robert Hight went 339.87 MPH in Sonoma in 2017.

What does the burnout do? 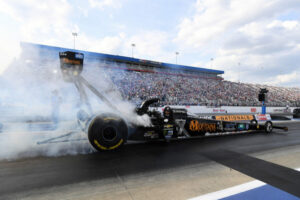 Before every run, the driver will go through the water box and spin the tires in what’s called a burnout. This helps warm and clean the rear tires and puts rubber on the track for better traction.

What is staging and what is the Christmas Tree?

The electronic device that starts each race is commonly called the Christmas Tree. On each side of the tree are six lights; a circle of small blue lights at the top (the top half for pre-staging and the bottom half for staging), three larger amber bulbs, a green bulb, and a red bulb.

When the driver rolls into the stage beam, the front tires are exactly on the starting line. The stage bulbs light, indicating that the car is ready to race. When both cars are fully staged, the starter will activate the tree, and each driver will focus on the three amber bulbs on his/her side of the tree.

In the nitro classes, all three amber lights will flash simultaneously, followed by four-tenths of a second later by the green light.

What type of fuel do Funny Cars and Top Fuel Dragsters run on?

CH3NO2 is the result of a chemical reaction between nitric acid and propane.

How much fuel do you go through in a run?

What does it mean to drop a cylinder?

When a cylinder runs too rich (too much fuel in the air/fuel mixture) and prevents the spark plug(s) from firing. When a spark plug fails to ignite, it substantially decreases the total power output by the engine. A dropped cylinder is often distinguishable by raw fuel spewing from the exhaust header.

What does it mean to smokes the tires?

When a car loses traction, the tires begin to slip and this causes tire smoke. This is usually caused by trying to apply the clutch too fast on a run.

What does it mean to win on a holeshot?

When a driver with a slower elapsed time (E.T.) wins an elimination round because he or she had a better reaction time, thus leaving the starting line first.