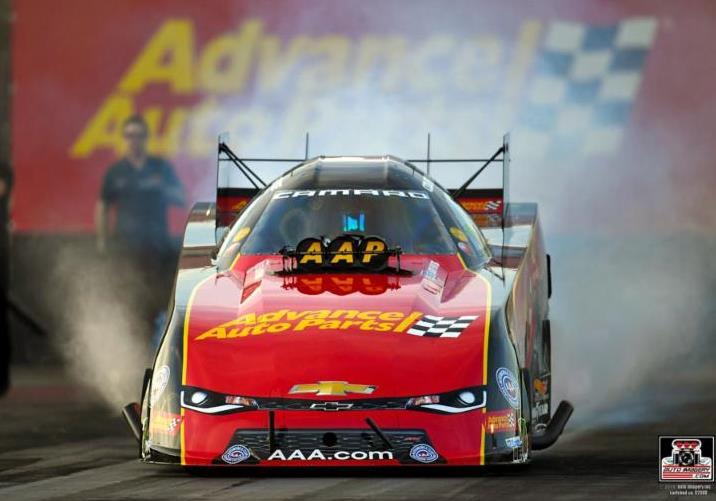 The Funny Car standout finished 2017 a career-best third in the points standings and left NHRA testing at Wild Horse Pass Motorsports Park outside Phoenix with the best time in the Funny Car category, a 3.839 on day three.

“I am excited for my entire Advance Auto Parts team to come back into the 2018 season at the Winternationals at my home track,” said Force, who was the No. 1 qualifier and went to the final round at last year’s event. “I love being back there. I am really excited to kick off the new season especially coming off my best finish. We have a few changes, like adding Brian Corradi as a crew chief alongside Dan Hood, so I am looking forward to a successful start to the season. We had a great test session in Phoenix. I am really looking to start the season with a lot of success at the Winternationals.”

Force, who raced a Taylor Swift ‘reputation’ car at the season ending event in Pomona, went to five finals round in 2017 and had seven No. 1 qualifiers, second best in the category only to teammate and 2017 champion Robert Hight. Like last year, Force is hoping her race car will start its consistent competitiveness at the Winternationals.

“We ran a new chassis at testing and we’ll be starting the season with it as well. We have a good handle on it and have gotten off to a great start,” Force said. “It will be a fast race car and we will bring it to Pomona and see what we can do. We feel good about getting this car as consistent as the Camaro from last year and I bet we can pick up a couple wins and be in great shape for 2018.”

While gunning for the 2018 world championship, Force, with the retirement of Alexis DeJoria at the end of last season, will be the lone woman racing in the Funny Car category, but that realization has not intimidated 2012 rookie of the year.

“It’s a little surreal to think that I’ll be the only female in Funny Car,” Force explained. “I’ve always raced against Alexis since my rookie season. I’m definitely going to miss having her out there It’s going to be strange not to have another female out here but I’m going to have to do the best job that I can to beat up on the boys a little bit and hopefully have a successful season.”