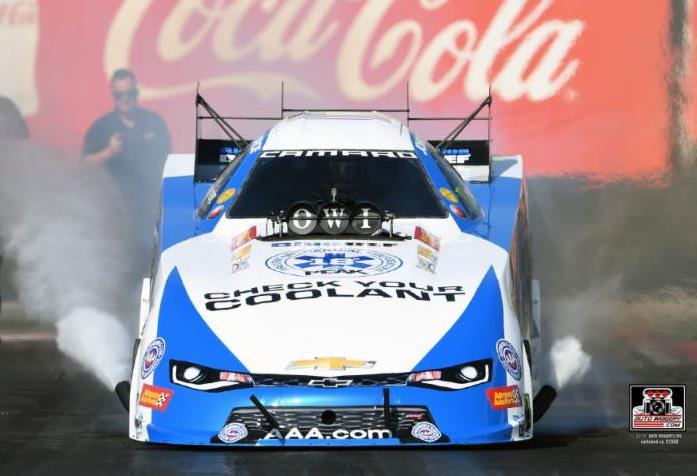 The Southern California local is no stranger to the renowned Auto Club Raceway at Pomona, he has 16 event wins at the facility including seven at the season-opening race. With a seventh-place finish in the 2017 standings, Force is looking forward to getting the new season started close to home.

“For a lot of people winter I am sure goes by really fast but for me winter seems to go so slow. I am looking forward to seeing the fans and all our sponsors at Auto Club Raceway for the Winternationals. It is my home track and we’ll have lots of family and friends at the races all weekend,” said Force.

Force will be running his PEAK Coolant and Motor Oil Chevrolet Camaro SS Funny Car with a new paint scheme in 2018, reminding fans that you’re just 18 degrees from a mechanical emergency. Force, who received his honorary doctorate from the University of Northwestern Ohio (UNOH) during the off-season, will be the face of PEAK’s campaign as Dr. Coolant.

“I have a new look for my PEAK Coolant and Motor Oil Chevy Camaro. I’ve got a big ole 18 Degrees logo on the hood. I got a doctorate in January from UNOH so you can call me Dr. Force, or I guess it’s Dr. Coolant, and I am going to be talking about some great programs with PEAK all season,” explained Force, who has a life-time sponsorship with the  They made some great videos which you’ll see on the internet soon. I love PEAK and with (Old World Industry’s CMO) Bryan Emrich’s help they are keeping me on the race track for as long as I want to race. They are a great partner along with Auto Club, Monster Energy, Advance Auto Parts, Chevrolet and Mac Tools we are going to do some damage this season.”

Also on Force’s mind this weekend will be the recognition of his team’s championship sweep of the nitro categories.

“I am really looking forward to seeing the champions get their rings and jackets on Sunday. I am proud of Brittany and Robert for winning the championships,” said Force who had one win and one No. 1 qualifier last season. “We will all have our work cut out for us this season though. We are starting fresh and I am ready to chase the Countdown and another championship.”