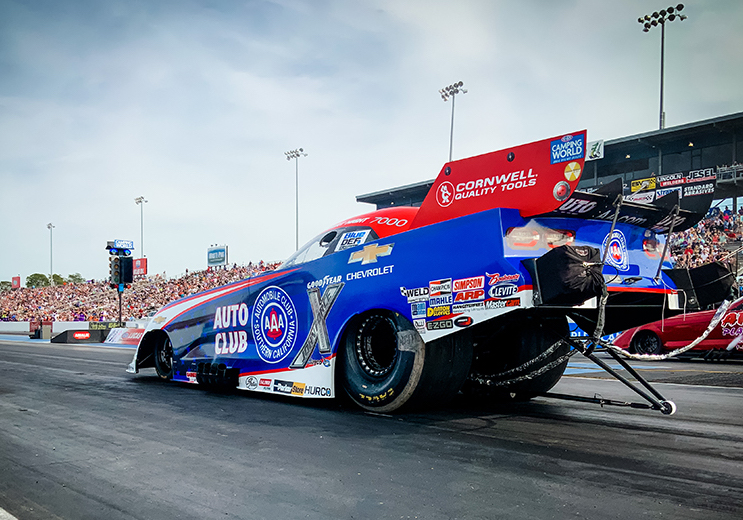 GAINESVILLE, Fla. (March 13, 2021) – The three-car team of John Force Racing all landed in the top five of qualifying at the Amalie Motor Oil NHRA Gatornationals at Gainesville Raceway on Saturday evening. Robert Hight and the Automobile Club of Southern California Chevrolet Camaro SS team led the way in the No. 4 Funny Car spot with John Force and the PEAK / BlueDEF PLATINUM Chevy Camaro just behind them in fifth. Brittany Force and the Monster Energy team stayed consistent to be fifth in Top Fuel.

After still managing to lay down a three-second pass with a cylinder out on Friday evening, Robert Hight and the Auto Club team improved to an impressive 3.951-second pass at 328.62 mph in the heat of the day on Saturday. With cooler temperatures in the third and final qualifying session, Hight handled his Chevy Camaro to the quickest pass of the session at 3.931-seconds and 330.15 mph to ultimately land in the No. 4 spot. His efforts have him matched up with Bob Bode in the first round of eliminations.

“We’re very happy, we had two good runs today. Except for that cylinder going out yesterday we’ve done really well. This Auto Club Chevy has made it down the track each run,” said Hight who picked up a total of five bonus qualifying points. “We wanted a little more on that last run but we’re looking forward to tomorrow, we’re ready. I’m ready for a race day, to go rounds and come out with a win and I know these Auto Club guys are too.”

Brittany Force and the Monster Energy team were consistent on Saturday, carrying over their momentum from Friday to put down a 3.848 second pass at 293.28 mph even after shutting off just before the starting line. In her second pass of the day, Force handled her dragster to a 3.750-second pass at 329.99 mph to put her in the No. 5 position.

“It’s a good start for John Force Racing. Coming back, first race of the season and we’re all sitting in the top five,” said Force who will face off against Justin Ashley in the first round of eliminations. “We went testing in West Palm Beach to get us prepared coming here to Gainesville and it paid off. Five is a comfortable spot to be. We were chasing that No. 1 spot on that last one but we’re okay sitting fifth. I’m ready to go some rounds with this Monster Energy / Flav-R-Pac team and win this thing.”

John Force and the PEAK / BlueDEF PLATINUM Chevy team had an interesting start to the qualifying day. Force had to shut off on the starting line because of a car left on the track. Crew chiefs Danny Hood and Tim Fabrisi made the decision to restart rather than go to the end of the field to make their second qualifying run. Force’s Camaro didn’t get very far off the line, however, because the throttle stop was left on. Then sitting No. 15, Force and the BlueDEF PLATINUM crew put up a 3.934-second pass at 323.66 mph to put them safely in the No. 5 spot to face Paul Lee in the first round.

“It was a good experience being back. There are a lot of new crew guys on this PEAK / BlueDEF PLATINUM team so we did make mistakes, I made mistakes,” admitted Force. “My crew chiefs Daniel Hood and Tim Fabrisi pulled it out there on the last run and it was a good car to drive. I’m excited to being back to racing. You don’t realize how much you love it until you lose it. Well, I haven’t lost it yet, we’re back.”