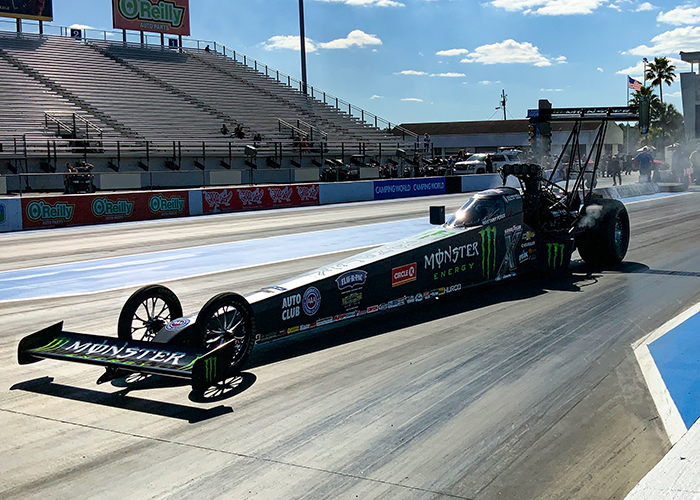 GAINESVILLE, Fla. (March 12, 2021) – After a year away from NHRA Championship Drag Racing competition, the three-car team of John Force Racing made their Camping World Series debut at the Amalie Motor Oil NHRA Gatornationals Friday evening at Gainesville Raceway. There was no rust to shake off for Brittany Force and her Monster Energy Top Fuel team as they ended the night in the No. 3 position. Robert Hight and the Automobile Club of Southern California Chevy Camaro team sit in No. 6 while John Force and the PEAK / BlueDEF PLATINUM Chevy Camaro team are currently No. 13.

Showing that being quickest at testing was no fluke, Brittany Force and the David Grubnic and Mac Savage tuned Monster Energy Top Fuel dragster kept up their consistency laying down a 3.747-second pass at 330.47 mph that momentarily landed them in the No. 1 spot. It wasn’t until the final pair of dragsters that Force was bumped to the No. 3 position by the three-time reigning world champion Steve Torrence and 2020’s championship runner-up Doug Kalitta.

“I am absolutely pumped to be back. We had too much time off. This race car is home. I love being back, back with my Monster Energy / Flav-R-Pac team, back with all of John Force Racing as a whole,” Force said. “To come out here and run well right off the bat after testing so well. I’m very happy with that. I’m excited for this weekend and to see what we can do. I’ve said all along, we’re looking to go rounds and start this season off with a win right out of the gate.”

Robert Hight and Auto Club team ran early in the professional qualifying session and ran into some trouble. With a cylinder out at the hit the three-time championship team still managed to go 3.998-seocnds at 318.24 mph to land in the top third of the Funny Car pack at No. 6.

“Not what this Auto Club Chevy team wanted this evening but even with a cylinder out it still went in the threes. That just shows you that when we have this thing tuned up right, it’s going to be scary,” Hight said. “It’s great being back out here, having the fans, being back in the car. It’s been a long year and I’ve been looking forward to this weekend. Tomorrow should be good and help get us set up for race day.”

John Force and the PEAK / BlueDEF PLATINUM Chevy Camaro team came out of the box aggressive, a little too aggressive. Force had tire smoke before running 4.456-seconds at 207.94 mph to land in the No. 13 spot.

“Well, we were going after it, my guys, for PEAK and BlueDEF PLATINUM and Chevy. We wanted to come out and put on a show,” said Force. “I’ll tell you what, it is good to be back out here. And Robert with Auto Club and Brittany with Monster and Flav-R-Pac, Cornwell Tolls stepping up we get to see them tomorrow. This crowd, the fans, NHRA and Camping World coming together to put on the greatest show on Earth. I’m glad to be back racing, back where I belong!”