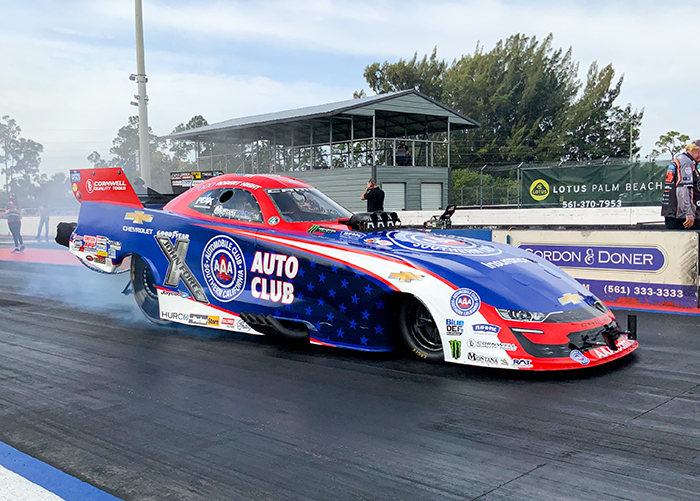 GAINESVILLE, Fla. (March 10, 2021) – The Automobile Club of Southern California Chevrolet Camaro SS and Robert Hight are cued up to make their return to the NHRA circuit at the season-opening Amalie Motor Oil NHRA Gatornationals. The three-time championship team are just as determined as ever to chase down another championship.

The red, white and blue of Hight’s hot rod has had success at Gainesville Raceway, racking up four victories at the facility in 2012, 2014, a double-up win with teammate Brittany Force in 2016 and a historic win at 2019’s 50th running of the event. In 2019, Hight also took the No. 1 qualifying position, his third consecutive making him the first nitro racer to start a season with three No. 1 qualifiers since Kenny Bernstein in 1987. In 2017, Hight set both ends of the track record at 3.828-seconds and 334.82 mph.

“Gainesville has been really good to this Auto Club team. We missed racing here but the last memories we have are of picking up that win at the 50th anniversary of the event. We’re ready to build on that,” said Hight, a three-time world champion. “We’ll see what we can do, it’s definitely going to be a show this weekend. This is a big race, it always is, this year it’s even bigger because it’s opening up the season.”

“I know what this Auto Club Chevy team is capable of, I know what Jimmy [Prock] and Chris [Cunningham] can do with this car and I know how hard the crew guys work,” Hight continued. “Coming off of testing, we’re ready.”

At Palm Beach International Raceway, Hight laid down a 3.866-second pass at 332.18 mph that was only narrowly bettered by John Force. While Hight would be second quickest of the test, the Auto Club team took the top speed a pass at 333.33 mph.

“Testing went really good. It’s good to be back in my Auto Club Chevy, to be back with my team. The car is responding well and things are lining up,” said Hight. “It was a long time off. I’m happy we didn’t forget how to do this. We’ll be ready to go after it next weekend at the Gatornationals.”