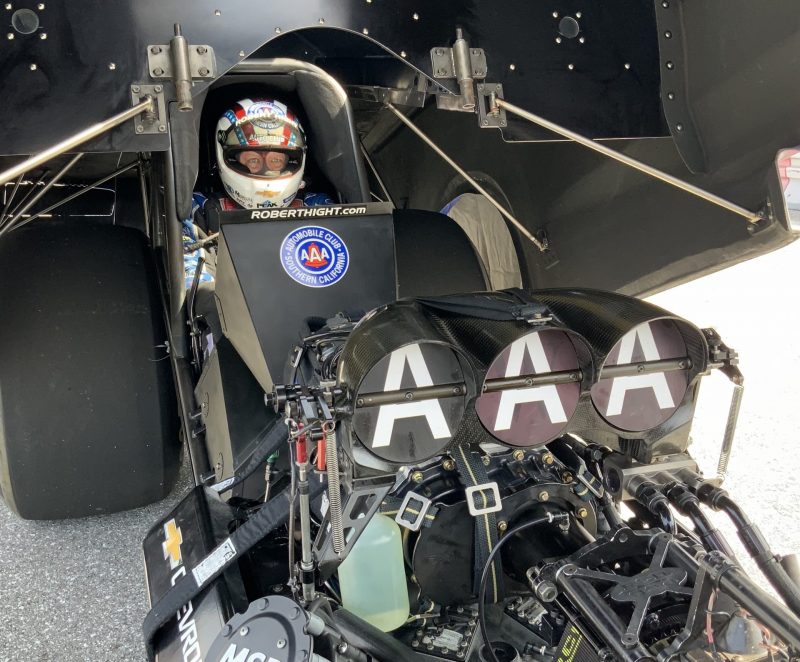 After qualifying fourth, Robert Hight and the Automobile Club of Southern California Chevrolet Camaro continued their consistent weekend on Sunday. Rolling out in the first round, Hight handled the Auto Club Camaro to a 3.921-second pass at 327.11 mph to defeat the young Bobby Bode’s 4.025 at 309.91 mph.

The win would match the three-time world champion up against team owner and 16-time champion John Force in the quarterfinals. With Force having lane choice, Hight lined up on the right and sailed to a clean 3.931-second pass at 330.39 mph to defeat Force whose Chevy Camaro had tire smoke for only a 4.994-second pass.

In the semifinals it would be a test of seven cylinders as both Hight and his opponent, Bob Tasca III, had a hole out. Hight would prevail with a 4.093-second pass at 306.19 mph to Tasca’s 4.115 at 312.35 mph to reach his 81st career final round, fifth at Gainesville Raceway.

“It’s a good weekend when you go to the final. When you watch the other guy smoke the tires, though, you look at it as one that got away, we beat ourselves,” said Hight who sits second in the Camping World Series championship points standings. “We’ve got some gremlins; we had a lucky round in the semis dropping a cylinder and winning with a 4.09. We have to do some polishing, but we’ll be back. When we go to the final when we have this Auto Club Chevy running right, look out.”

In his 500th race start in a Chevrolet John Force and the PEAK / BlueDEF PLATINUM Chevrolet Camaro took the first-round victory with a 3.915-second pass at 326.56 mph over Paul Lee’s 3.977 run at 328.94. Lining up against his team president, Robert Hight, in the second round, Force and his Chevy Camaro ran into tire smoke and coasted to a 4.994-second pass at 164.19 mph. Force currently sits eighth in the points standings.

“We all made the show after being off a year. It was exciting to be back and be back in the seat of my PEAK BlueDEF / PLATINUM Chevrolet Camaro and we went a couple of rounds,” Force said. “We look like a race team again; Robert Hight and Auto Club getting to the final., qualifying well, Brittany with Monster and Flav-R-Pac. We’ll move on to the next race. We’re excited and we’ll see how it goes.”

Brittany Force and the Monster Energy Top Fuel team had an early exit on Sunday. Force and her David Grubnic and Mac Savage tuned dragster powered to an impressive 3.727 at 331.94 mph that was second quickest of the round but lost on a hole shot. Justin Ashley laid down a 3.733 at 324.05 but his .034-second reaction time bettered Force’s .072. Despite the first round exit, Force still sits in the top 10 of the points standings in ninth.

“A year away and John Force Racing is proud to be back. Our Monster Energy / Flav-R-Pac team qualified in the top five and we had a consistent race car all weekend long,” Force said. “First round was tough, getting beat on a hole shot is never easy but finding the positives: we ran well and I had a decent light. I’m using today’s upset as motivation going into the next one. Ready to go after another win.”