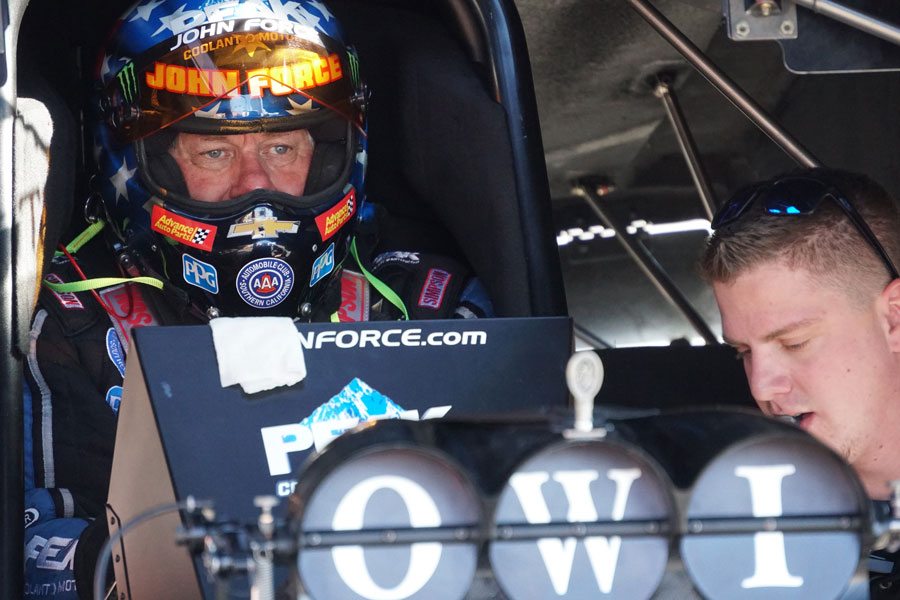 CHANDLER, Ariz. (Feb. 25, 2018) — In an accident eerily reminiscent of his 2007 crash in Dallas, Texas, John Force won his second round race in Sunday’s 34th annual NHRA Arizona Nationals before an engine explosion sent his PEAK Coolant and Motor Oil Camaro careening into the Toyota of Jonnie Lindberg.

The two cars, linked together by tangled parachutes, hit one wall, then the other before coming to a stop in a cloud of smoke. As a precaution, the 68-year-old veteran was transported for further evaluation and released Sunday evening from Chandler Regional Hospital.

The 148-time tour winner returned to the track to congratulate daughter Courtney who won the Funny Car title in his absence.

In 2007, Force won his second round race in the NHRA Fall Nationals but, as his car crossed the finish line, it blew a tire, crossed into the opposite lane and collided with the Dodge driven by Kenny Bernstein.

Although the two incidents were similar, Force cited the safety engineered into the cars since his Dallas crash as the main reason he wasn’t more seriously injured this time around. At Dallas, he was airlifted out of the Texas Motorplex, underwent six hours of reconstructive surgery and several months of rehab before returning to competition.
Significantly, he won two of his record 16 NHRA titles after that accident.

“This was a great day for John Force Racing,” Force said. “Brittany came back from a crash at Pomona and won first round and Courtney won Funny Car for Advance Auto Parts. My struggles continue, but I’m a big boy, I’ll fix it.”