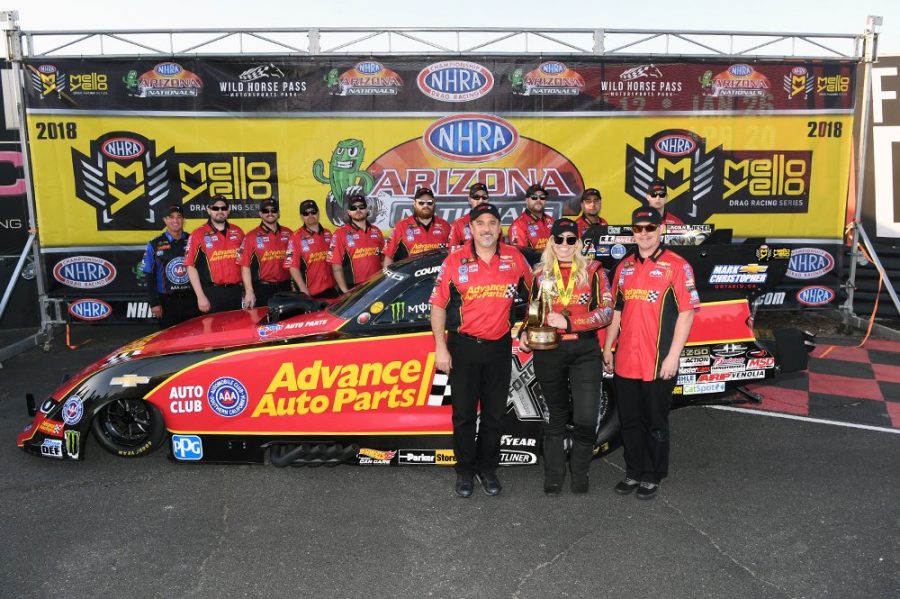 CHANDLER, Ariz. — A weekend filled with a well of emotions ended on the ultimate high-note for John Force Racing at the 34th annual NHRA Arizona Nationals at Wild Worse Pass Motorsports Park outside of Phoenix. Courtney Force will head back to Yorba Linda, Calif. with a Wally while her father, 16-time world champion John Force, will head home with another hospital visit.

The drag racing legend ended his race day with an engine explosion during the second round. John Force won the round before his PEAK Coolant and Motor Oil Chevy Camaro burst into flames, went out of control, made contact with the retaining wall, and collided with opponent Jonnie Lindberg in the opposite lane. Force was transported to a local hospital for evaluation while Lindberg exited the car under his own power. Force was later cleared and returned to Wild Horse Pass after racing had ended.

“My struggles continue, but I’m a big boy, I’ll fix it,” said Force who is 11th in points. “Really glad to know that Jonnie Lindberg is okay. Don’t worry about me. I’ll be fine. I think I still have another championship in me. Depending on what the doctors say, I’m gonna come out and watch Robert test his Auto Club Chevrolet tomorrow and then get ready for Gainesville.”

On the opposite side of the spectrum, Courtney Force powered her Advance Auto Parts Chevrolet Camaro SS Funny Car victory ending her 43-race winless streak. Force over powered Tommy Johnson Jr. in the final round with a 3.834-second pass at 337.16 mph. Her speed bettered the track record she set during qualifying. Johnson Jr. smoked the tires to the 6.814 at 101.57.

“Every single one of my guys on the Advance Auto Parts Chevy Camaro has been working so hard. Today was a tough day,” said Force who last won on May 1, 2016 at the NHRA SpringNationals in Houston. “We had a 40-minute turnaround in the semifinals and didn’t have lane choice in the finals but we were able to go down there and lay down a killer number.

“Thanks to my guys. They helped give me the confidence to get in that car today. They make me feel safe in that car because of the amazing job they do on it,” explained Force who now has nine career victories. “Brian Corradi and Dan Hood, they’ve been unbelievable, getting us the No. 1 qualifier hat and then to top it off get the Wally at the end of the weekend. Pretty incredible. Definitely a great start to our season. Been looking for a win for a long time now. Feels like forever. This one definitely feels good and I know it will make my dad feel better.”

The victory puts Force second in the points standings behind only Matt Hagan who she defeated in the second round, just moments after seeing her father’s wreck.
“Hagan actually came up to me when I had to race him and told me you’re a great driver you know how to do this, just clear your head,” Force said. “I know he didn’t want me to beat him but it was really nice of him as a competitor to tell me you know what to do out here and just remember that. It’s great to have competitors out here that are so amazing and so supportive even when you have to race them.”

Force also had a win against two-time world champion Del Worsham before facing Hagan. She would have raced her father in the semi-finals but instead made a solo run.

“Coming from Pomona trying to get our heads on straight and focus on putting that behind us and have a fresh start when we come to Phoenix and then dad goes up and has a huge explosion in the lights,” said Force who recorded her first win at the Arizona Nationals. “That’s one of the things that’s out of your control. I’m glad to see that Lindberg’s okay. You have to just switch your focus and get back in your car. My dad and my crew chiefs are the ones that gave me the confidence to get back in my race car and battle it out all day long. These cars are unpredictable. We know that as drivers. You just have to go out there and fight hard.”

Top Fuel world champion Brittany Force piloted her Monster Energy dragster to a second-round finish just two weeks after a scary crash at the season-opening Winternationals. Force put up a 4.661 run at 156.12 and was out done by Billy Torrence’s 3.723 pass at 320.74.

“Overall, looking at our weekend, I’m happy with it. I’m not disappointed in anything,” Force explained. Coming back from a wreck like we did in Pomona, that first run, climbing back in that car, it’s not easy. It’s definitely tough. And especially, also doing it again in that first round. It takes you back. I think it’s a work in progress. It’s going to take some time,” said Force. “I’m happy with our Monster Energy team. We pulled out our old car, didn’t have time to test it, just took it down there and made some pretty good passes. I pulled my foot out of it on that first run. It moved around a little bit and I clicked it a little bit early. But I’d rather play it safe than end up like we did last weekend.”

Force had a first-round win against Clay Millican to put her eighth in the Top Fuel points standings.

Two-time and reigning Funny Car world champion Robert Hight fell in the first round to Tommy Johnson Jr. after the pair both pedaled to the finish-line. Hight’s 4.806 pass at 273.44 was bettered by Johnson Jr.’s 4.715 at 225.60.

“It was a racetrack that was in the 90s (temperature-wise). We’ve run 3.79 on a racetrack in the 90s so you go up there anticipating running a low .80 to win,” Hight explained. “Obviously, we didn’t make enough changes based on what we were seeing out there with the cars not making it (down the track). We needed to make a lot bigger move than we ever anticipated we needed to. If we had gone up there trying to run 3.95, we probably could have navigated it. We’ll test tomorrow (with) some new stuff that hopefully we’ll have on our car at Gainesville and get ‘em there.”