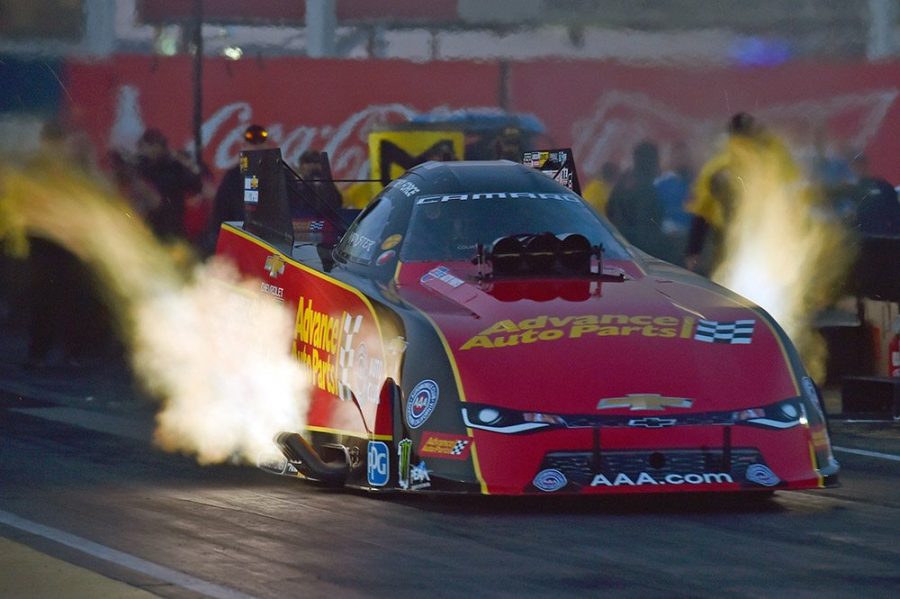 CHANDLER, Ariz. (Feb 24, 2018) — The uncertainty that faced John Force Racing heading into the 34th annual NHRA Arizona Nationals has all but dissipated as the championship team heads into Sunday eliminations at the second of 24 races on the NHRA Mello Yello Drag Racing Series schedule at Wild Horse Pass Motorsports Park outside of Phoenix.

In the final round of qualifying, Courtney Force powered her Advance Auto Parts Chevrolet Camaro SS Funny Car to the No. 1 qualifying position. Force’s stellar 3.826-second pass at 335.98 mph is her first No. 1 at Wild Horse Pass Motorsports Park and set both ends of the track record.

“That run was pretty incredible. I love being back here in Phoenix. We tested on this track just a few weeks back and had run a killer number,” said Force, who ends her streak of qualifying No. 2 at the facility for three consecutive years. “I knew coming into this race I was hoping we could lay it down again. I saw (Co-Crew Chief Brian) Corradi making some changes on the car right before we got it started. It flew down there. It felt good. I’m excited to be in that top spot and I’m really proud of my guys.”

She has 18 No. 1’s in her career and finished 2017 with seven while racing to a career best third place finish.

“We had pretty good luck getting No. 1 qualifiers last year,” Force explained. “Hoping to turn this into a win for sure. The most important thing was finding consistency. It’s a great start being in the top spot, but we’ve gotta continue to be consistent on race day. That’s pretty much the most important thing is to continue to push our team and see if we can go rounds and get in that winners’ circle.”

Force will be racing for her first win at Wild Horse Pass when she lines-up against veteran driver Del Worsham in the first round. She is 9-10 against Worsham. Her No. 1 speed is also the fastest of Corradi’s career.

After failing to get the Peak Coolant and Motor Oil Chevrolet Camaro SS Funny Car down the 1,000-foot course on his first two qualifying attempts on Friday, John Force drove to a 3.864 pass at 332.51 during the third qualifying session Saturday to land himself in the No. 4 spot.

“We just struggled and blew up stuff. It was a combination of so many things. Then, my car wouldn’t go down the racetrack yesterday. It wouldn’t go a hundred feet,” Force said. “I met with the crew chiefs this morning and, to see them start talking about how to figure out what we should do, was exciting. Jon Schaffer, Brian Corradi, Jimmy Prock, Chris Cunningham, Jason McCulloch, Dan Hood, everybody got on board and when they came out (of the meeting), they changed it.”

The 16-time champion will be racing Jeff Diehl in the opening round of eliminations and will be looking to increase his 8-0 streak against the driver nicknamed “The Surfer.”

Funny Car world champion Robert Hight landed himself and the Auto Club of Southern California Chevrolet Camaro SS Funny Car in the 11th position off a 3.927 pass at 329.26 from the first qualifying session Friday. Hight has struggled to get down the track since that first run.

“We’ve been dealing with some clutch issues and like last night, we were just a little off (on the set-up),” Hight explained. We went out there to run 3.80. Jimmy said it’ll either go or it won’t and if it doesn’t, it’ll go first round. I think this Auto Club Chevrolet Camaro is ready to run a big number. I’m excited about eliminations.”

Hight will face Tommy Johnson Jr. in the first round. He holds an 18-13 record against the Make-A-Wish driver and the two have split four races at Wild Horse Pass.

Brittany Force and her Monster Energy dragster locked in the 14th qualifying position after running a 3.828 at 253.52 in the third qualifying session. Now that she has four runs under her belt since the incident at Pomona, Force is ready to get back into winning fashion.

“After just our runs coming back from Pomona, I’m perfectly happy with that 3.82. We ended up No. 14 and we’ll run (Clay) Millican tomorrow,” said Force who has piloted her dragster to three of the last four final rounds at the Arizona Nationals. “I’m feeling good. We’ll just go out first round and go straight down there.”

The reigning Top Fuel world champion is 3-7 against Millican and is looking for her first win at the event.