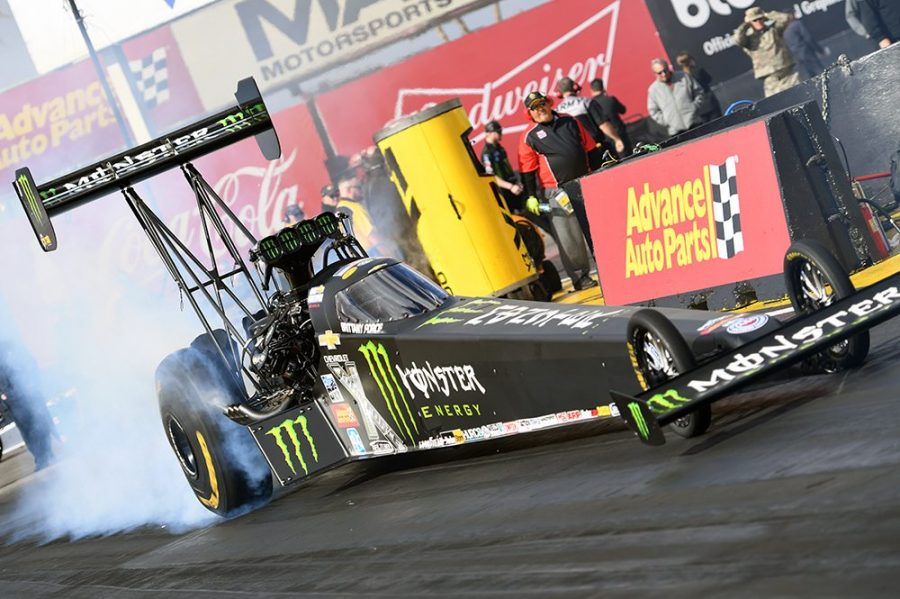 Top Fuel world champion Brittany Force returned to work in her Monster Energy Top Fuel dragster just 13 days after a crash at the season-opening Winternationals.
“It was ugly,” said Force of her Feb. 11 crash. “I was hurting for a few days but I feel good right now. I got in (the race car) yesterday. I think that was the best decision. I jumped in, got belted in and I felt good. I recovered pretty quickly. I’m glad to be back. You know, this is home; these racetracks are home.”
Force, who did not make a full pass, is currently in the 13th qualifying position with a 4.454-second pass at 172.72 mph.
“It’s going to take a few runs to figure out this car. It is our car from last season. The guys had to haul back to Indy (after the Winternationals), pull this car out, rebuild it and get it here in time,” Force said. “We get two more tomorrow. I’m not worried. Plus, it works better for me, getting slowly back into it.”
Courtney Force powered her Advance Auto Parts Chevrolet Camaro SS Funny Car to the provisional No. 2 qualifier with a 3.845 pass at 328.70 during Friday’s first qualifying session. Her elapsed time matched the No. 1 qualifier however, her speed landed her in the No. 2 spot.
“We pushed it on the second go to see if we could run better. Nobody technically outran us other than speed,” said Force who, if she remains in No. 2, will have qualified second at the event for four-consecutive years. “So, we’re just gonna take what we learned today and try again tomorrow. Luckily the conditions are going to be similar so we can go out there and try to fix what we were attempting in Q2 and get the top spot back in this Advance Auto Parts Camaro.”
Reigning Funny Car champion Robert Hight holds the No. 7 position heading into Saturday’s qualifying. Hight raced his Auto Club of Southern California Chevrolet Camaro SS to a 3.927 pass at 329.26 before shutting off during the second run.
“It was just a set-up issue. When the track gets that cold, especially here at this place where it’s always got a lot of bite, you get shake conditions and it’s very, very tricky for Funny Cars,” explained Hight. “You gotta hit it just right and we didn’t. We were just a little on the fast side and it started shaking. We’ll do a better job tomorrow.”
John Force is sitting in 15th after the first two qualifying runs and will be looking for improvement from his 6.745 at 96.00.
“We’re still struggling with my PEAK Coolant and Motor Oil Chevrolet Camaro,” admitted Force. “We’re having some issues, but we’ll get it fixed. Overall, good to see Brittany back in the Monster Energy car. I think it’s just what she needed. Courtney and Robert are fast. These young kids on my car are good. They’ll get me back in the game.”
Qualifying at the 34th annual NHRA Arizona Nationals will continue Saturday with two rounds set for 2 and 4:30 p.m. MT.
PrevPrevious
NextNext