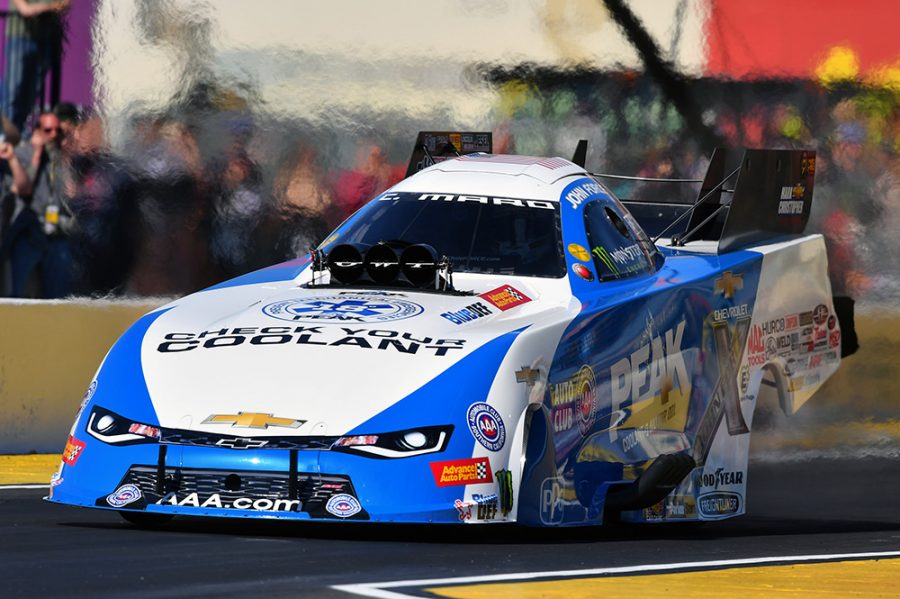 BAYTOWN, Texas (April 18, 2018) — Entering the NHRA SpringNationals, the fifth race on the NHRA Mello Yello Drag Racing Series schedule, John Force will be counting on his past success at Royal Purple Raceway, located just outside of Houston in Baytown, Texas, coupled with his most recent testing to give him the weekend he needs to turn his season around.

“This season has had a tough start,” Force said. “We have been testing and we figured some of our problems out. We ran well in Las Vegas at the Four-Wide and didn’t have any issues. That is a step in the right direction. We stayed and tested after that race and I feel good heading to Texas.”

Force has won seven times at Royal Purple Raceway, more than any other professional drag racer in any category, and he also has nine No. 1 qualifiers. Force’s 100th NHRA victory also came at the NHRA SpringNationals in 2002.

“I love racing in Texas whether we are in Houston or Dallas. I have won a lot of races in Houston and the fans are great,” Force explained. “Robert will have AAA Texas on his hot rod and we will be going to the AAA Texas stage to talk with the fans. I want to get back into this fight for the championship.”

Currently 11th in the NHRA Mello Yello points standings, Force is only narrowly outside the top 10 by 18 points. After a series of races that required Force to pull out multiple car bodies and motors, the driver of the PEAK Coolant and Motor Oil Chevrolet Camaro SS Funny Car is looking to build on his second round finish at the inaugural Las Vegas Four-Wide Nationals where he made six successful passes.

“We moved up in the points some in Las Vegas. We aren’t going to win the championship this weekend but we need to start running better and winning rounds,” Force said. “I have sponsors like PEAK, Auto Club, Advance Auto Parts Chevrolet and Monster Energy and we want to perform for them. I have a lot of young guys and we are all working together to get this PEAK Camaro running fast and winning rounds. I am ready to let this race car do the running for me.”

Qualifying at the NHRA Spring Nationals at Royal Purple Raceway in Baytown, Texas begins with two sessions on Friday at 4:30 and 7 p.m. and continues Saturday with sessions at 1:30 and 4 p.m. Eliminations are set to begin Sunday at 11 a.m. Catch the action on FOX Sports 1 (FS1) with live qualifying at 1 p.m. on Saturday and live finals coverage beginning at 2 p.m. Sunday