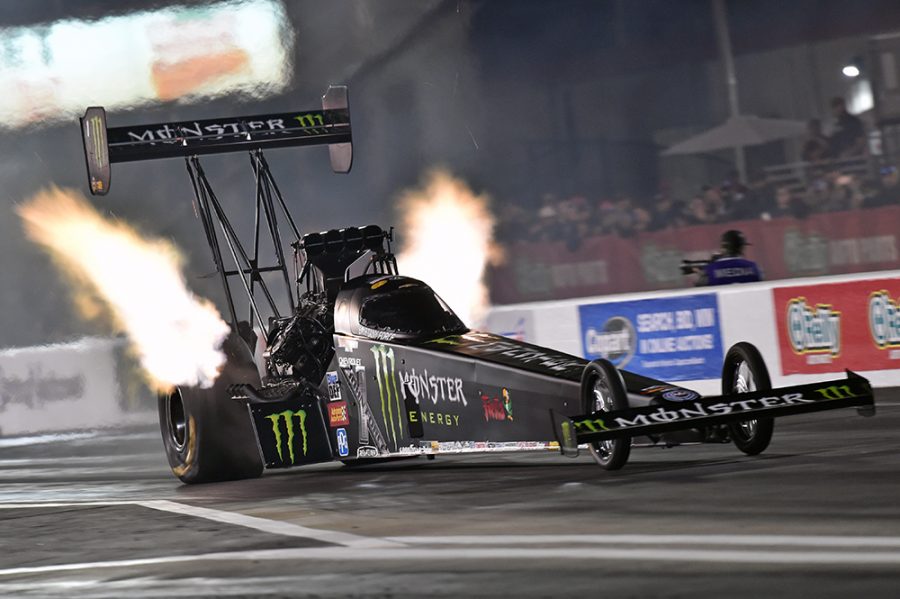 BAYTOWN, Texas (April 20, 2018) — Brittany Force piloted her Monster Energy dragster to the provisional No. 1 qualifier Friday night at the NHRA SpringNationals. In Funny Car, Robert Hight is narrowly in the second position, Courtney Force is 11th and John Force is 12th at the end of day one at Royal Purple Raceway just outside Houston in Baytown, Texas.

Reigning Top Fuel world champion Brittany Force set the track elapsed time record with her 3.701-second pass at 313.80 mph in the second qualifying session. It was only her second pull in the new dragster.

“It has been a whirlwind season. We pulled out a brand-new car in Pomona and that was my team’s dream car. We loved it and, unfortunately, we wrecked it. We have been running our 2017 race car the last few races while we built this dragster. We got it together and I spent the last week in Indy getting fitted for it,” explained Force. “Qualifying was testing for us. Alan Johnson, Brian Husen and this Monster Energy team are pretty incredible to be able to come out and on the second run with this car go to No. 1. That is amazing.”

“The air is really good here. That is a brand-new car, our third one of the year. We are still in test mode. That was a good solid run. We are going to keep chipping away at this thing,” added Top Fuel consultant Alan Johnson.

Robert Hight currently holds the second spot in his AAA Texas Chevrolet Camaro Funny Car. His 3.921 pass at 313.15 from the first session of the day was quickest until Hight overpowered the track in the second session and was overtaken by just eight thousandths of a second.

“We were pushing this AAA Texas Camaro hard. This is one of those places that if you don’t get after it you will get tire shake. You can lose a run that way,” explained Hight. “We were aggressive for sure. We changed some stuff on the car this week to adjust for the new header rule this year. The first two runs showed a lot of promise. Our sixty-foot times are way more efficient than they have been. Even though it didn’t go down the track we learned some stuff. That run only went to a second and a half and the car speed was a little quicker than our 3.79 run last year. It is showing it will run if we can get in the right conditions and put it all together. I am proud of these guys. We are No. 2 in the AAA Texas Chevy and, especially knowing weather could be coming in tomorrow, we are in a good spot.”

Courtney Force raced her Advance Auto Parts Chevrolet Camaro SS Funny Car to a 4.247 pass at 226.89 in the second qualifying session. Force jumped into the No. 11 spot after experiencing tire shake and coasting to the finish line in the first session.

“Getting a good run in that session was pretty important for this Advance Auto Parts Funny Car team,” Force said. “We wanted to make a good pass because we didn’t get a full pull in the first session. Thankfully we made a decent run in Q2 to get us in. We were on a really good run looking at our incremental times but it dropped a hole on the left side and started pulling me to the inside so I had to get off the throttle. We will look to improve tomorrow. If we can’t run because of rain at least we are in the show.”

John Force pedaled his PEAK Coolant and Motor Oil Chevrolet Camaro SS to a 4.625 at 222.29 in the second session of the day. Force improved from 15th to 12th with the effort.

“I had to pedal it to get it in. I didn’t pedal it in the first round. We had some problems but we were quick enough to get us in. We need to get into the top half tomorrow,” Force said. “We have a ways to go but we are watching weather tomorrow. The biggest positive is the problem we were having all these races, knock on wood, we don’t seem to be having it right now. We are going to keep our eye on that but I have a lot of confidence going into tomorrow.”

Qualifying at the NHRA SpringNationals at Royal Purple Raceway is set to continue Saturday with two sessions at 2 and 4:30 p.m.