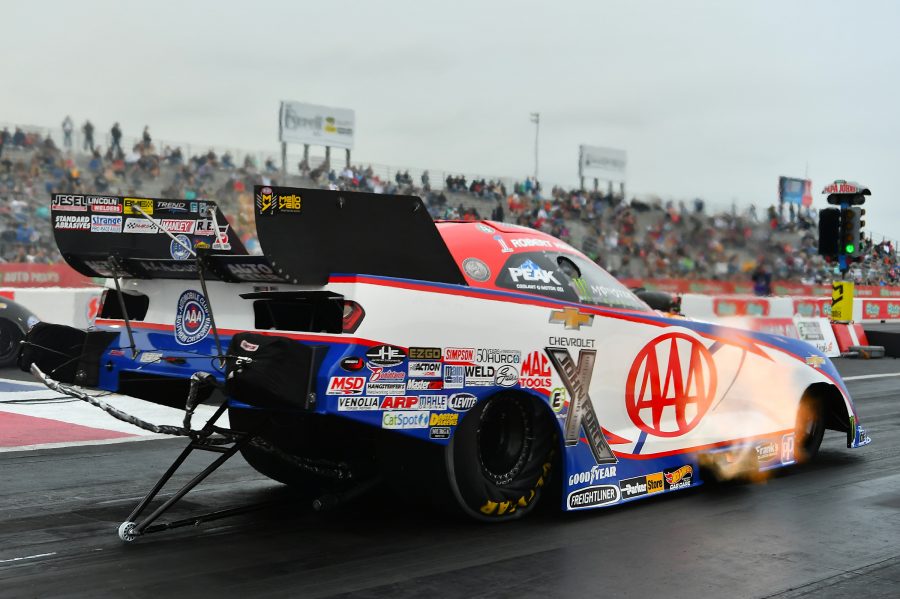 BAYTOWN, Texas (April 21, 2018) — Reigning Funny Car world champion Robert Hight powered his AAA Texas Chevrolet Camaro Funny Car to the No. 1 qualifier Saturday at the 21st annual NHRA SpringNationals at Royal Purple Raceway outside of Houston. Hight took the top spot from teammate Courtney Force who is No. 2, Top Fuel world champion Brittany Force also claimed the No. 2 spot and John Force, for the first time since 2008, failed to qualify for eliminations.

Hight laid down a 3.894-second pass at 317.27 mph in the final qualifying session to earn the 58th No. 1 of his career, first of the season and second at Royal Purple Raceway. Hight’s first No. 1 at the facility came in 2005 which led to his first pro victory in only his fourth professional race.

“It has been tricky. We did come right off the trailer on Friday with a 3.92 which was low of Q1. After that we were a little too aggressive,” explained Hight. “Jimmy (Prock) changed some things with the car over the past week that had to do with the NHRA mandated header angle rule. We adjusted the balance of the car and it definitely has more traction. Every run, I knew, if it hooked up and went, we would be low ET. You have to get it down there, though. I think the right lane is a little better and that was the lane where we made our two good runs. Right lane will definitely be lane choice tomorrow.”

In the first round of eliminations Hight will face Todd Simpson who he is 3-0 against.

Courtney Force and her Advance Auto Parts Chevrolet Camaro SS Funny Car are just behind Hight with their 3.911 pass at 295.14 from Saturday afternoon. Force was moved into the second spot by Hight on a side-by-side qualifying run.

“When you have great side-by-side racing, even in the last qualifying session, it is fun. That was a great job by the AAA Texas Funny Car team and they made an awesome run. They took our No. 1 spot away and bumped us to No. 2 but it is good to know that we have some impressive race cars over here at John Force Racing. My team has given me a fast hot rod all season. It has been great to go into race day with a lot of confidence. Danny Hood and Brian Corradi have done an awesome job with this Advance Auto Parts Camaro. This is a tricky race track but I have a lot of confidence in this Advance Auto Parts team.”

Force has qualified in the top four at every race this year and at 26 of the last 30 races overall. She has one previous win at the SpringNationals coming in 2016. Force will line up against Jeff Diehl in round one.

Top Fuel reigning world champion Brittany Force and her Monster Energy dragster are qualified second off their 3.701 pass at 313.80 from Friday night. It will be her best race day starting position at Royal Purple Raceway.

“I feel great. I am very impressed with this team. This is a brand-new race car that we just pulled out this weekend. I have to thank my entire team, my crew chiefs and the guys at the JFR fab shop in Brownsburg, Ind. They really pulled things together to get this car ready and I know it was a lot of hard work,” Force said. “To be able to go down the race track and make two awesome runs is pretty amazing. We were No. 1 for a while and I am very happy with that. We got bumped down to No. 2 but that is a great spot to start the race.”

Force will compete against Terry Haddock in the first round of eliminations on Sunday.

John Force’s category-leading streak of 221 consecutive races without a DNQ came to an abrupt end Saturday at Royal Purple Raceway where the 16-time champion failed to make the 16-car field for the NHRA SpringNationals.

“That is hard for me. You earn what you get. We didn’t put it in the show. We couldn’t get to half-track,” said a disappointed John Force from the top end after his unsuccessful final qualifying run. “We have had a lot of problems all year. NHRA came up with some automatic shut-off stuff for when you build pan pressure, it shuts you off. We have to stick with that. It shut the car off every run that we made this weekend. At least I got my final shot to get in and I didn’t make it. I will be here tomorrow rooting on Robert, Courtney and Brittany. I’ll be signing autographs for all the fans. I am sorry to all of you fans that I didn’t make it.”

Force had not suffered a DNQ since Sept. 13, 2008 when he failed to make the show at the NHRA Carolina Nationals at Charlotte. Saturday’s stumble was just the 22nd of the Hall of Famer’s 40-year pro career and his first in the Peak Coolant and Motor Oil Chevrolet Camaro. Force set a drag racing record by qualifying for 395 consecutive events from 1988 until April 2007.

“I am bummed that the boss didn’t get in. That was quite a streak he had going,” added Hight. “There is nobody better at rallying a team and leading a comeback than John Force. He loves the fight and he will do whatever it takes to get his team back on top. It really isn’t something to worry about because two of our Chevys are No.1 and No. 2 right now. We have good combinations and we just have to duplicate one of those set ups for John’s PEAK Funny car. He’ll be back next week in Charlotte.”

Eliminations at the NHRA SpringNationals are slated to begin Sunday at 11 a.m. local time at Royal Purple Raceway. Catch the action live on FOX Sports 1 (FS1) at 2 p.m. ET.