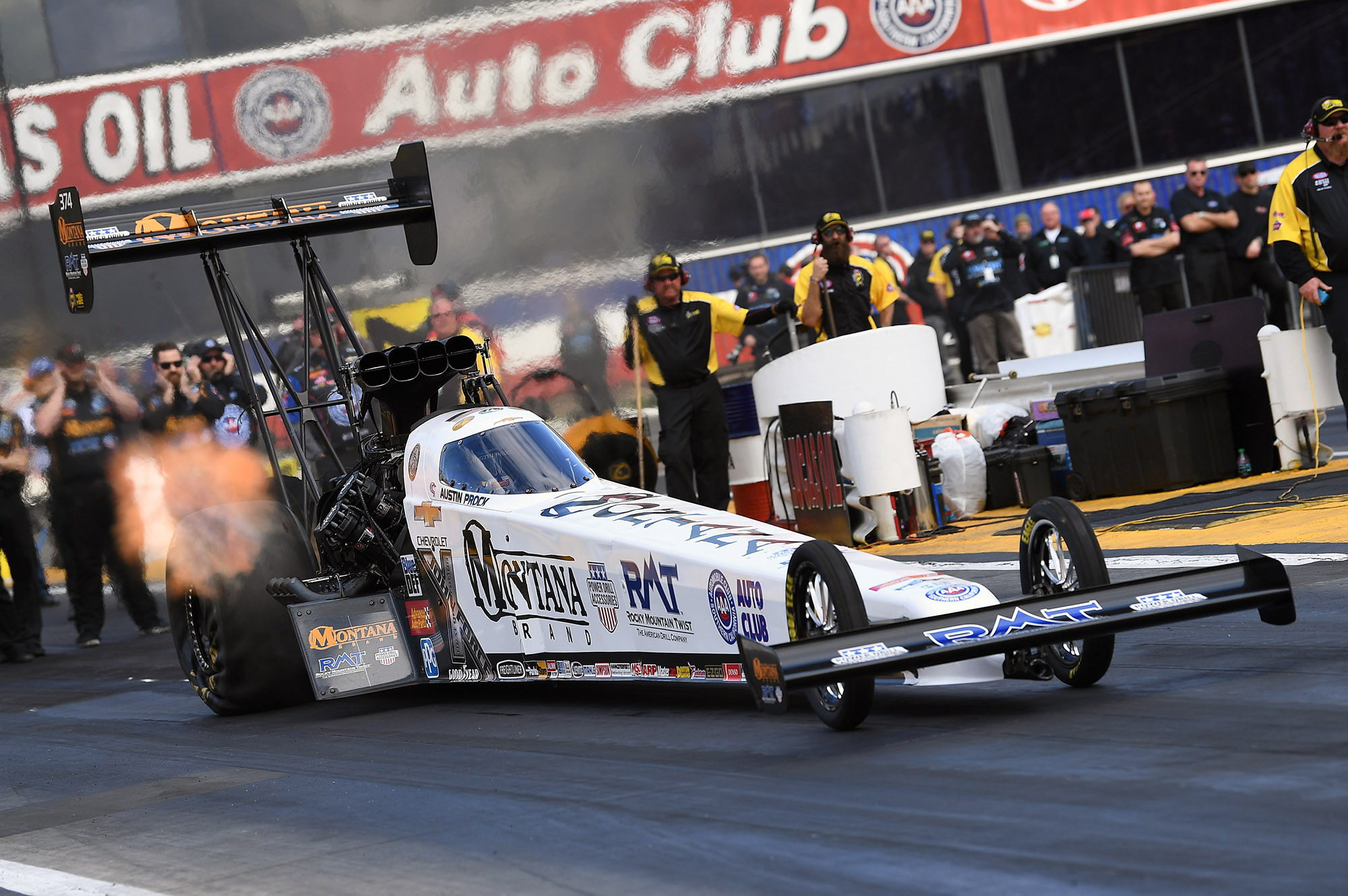 Prock’s Montana Brand / Rocky Mountain Twist team, headed by Jon Schaffer and Ronnie Thompson, thrashed to be ready for the season opening Winternationals after Prock earned his Top Fuel license only four days prior to the first day of qualifying at the NHRA season opening event. Prock’s team at the Winternationals was comprised of a hodgepodge of former John Force Racing crew members and Force American Made workers.

“Everything came together real last minute. We had a handful of different guys that have never worked together before,” Prock said. “All the guys are experienced and have a lot of knowledge about the race car but have never worked a service together, and that’s a big part of it, getting up to the starting line, making no mistakes and everyone did an incredible job. They have great leaders, Jon Schaffer and Ronnie Thompson, to help guide them along and keep everyone on the same page but this weekend going into Phoenix we’ve hired more full-time people. People we’re hoping to build the season with.”

The result? A No. 11 qualifying effort and first round victory over 2017 Top Fuel world champion Brittany Force. Not to mention a stellar 3.699-second run at 334.15 mph in the second round that was just narrowly bettered by Mike Salinas.

“We ended the weekend on a great note. We ran a 3.69, broke into the .60s. I think that was a big shock to everyone. We went from running 3.76 to 3.69. That’s a huge jump. Jon Schaffer and Ronnie Thompson did a killer job,” Prock said. “We had the brain trust of John Force Racing over there helping point them in the right direction and giving them ideas. They came up with an incredible choice second round. Almost won the round and lost by six thousandths of a second. Hopefully we can get on the other end of that this weekend and go for a win.”

Heading to Wild Horse Pass Motorsports Park for the second of 24 events NHRA Mello Yello Drag Racing Series schedule, Prock now has a more set crew, a national event start under his belt and a familiarity with the race track which will be a rarity for the 2019 Auto Club Road to the Future Award candidate. Prock has only made passes at four of the 22 tracks on the circuit and only in Top Fuel at Wild Horse Pass.

“We’re looking forward to a great weekend. Phoenix is the only racetrack where we have any bit of data with the dragster because we got to test there for one day before Pomona and hopefully we can build off of that and build off of what we did in Pomona,” Prock said.