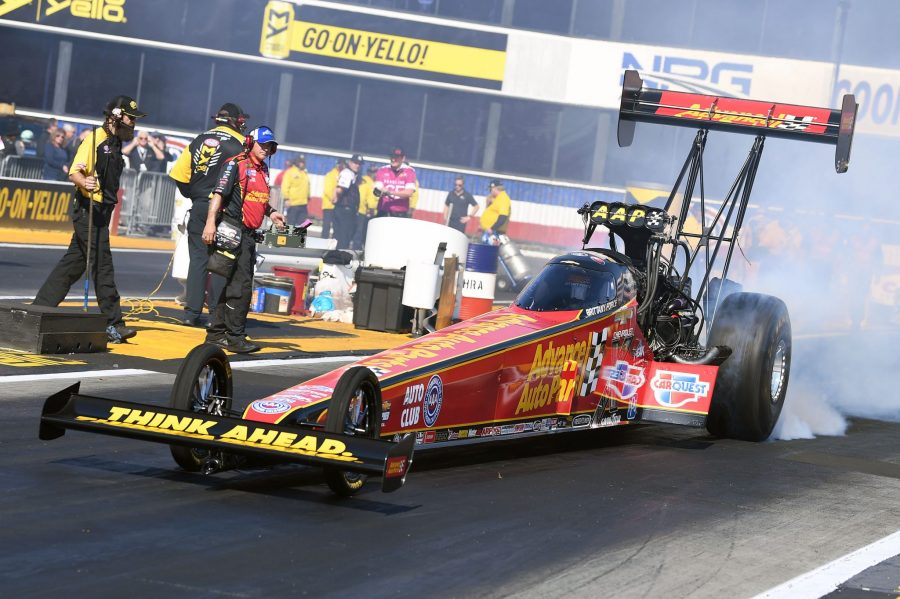 CHANDLER, Ariz. (Feb. 20, 2019) — With her new Advance Auto Parts team by her side, Brittany Force is heading into the Magic Dry Organic Absorbent NHRA Arizona Nationals eager to continue the hard work put in through the winter and season opener.

For the Top Fuel world champion, the Arizona Nationals marks a commemorative moment. After a dramatic wreck at the 2018 Winternationals, Force was back in the seat of her dragster just 11 days after her hospital stay. She qualified 14th and had a first round win against Clay Millican before exiting against eventual finalist Billy Torrence in the quarterfinals.

“We were just in Phoenix for testing. We have 13 runs under our belt at the track so I’m looking forward to getting back. We have more information than we did going into Pomona. I’m ready to go some rounds and win this thing,” said Force. “And for me especially, this was the first race I went into after my crash and we did better than expected so I’m hoping to do even better this time around. We had a good start to the season coming out of Pomona. We made some good runs so we’re headed in the right direction.”

The 2019 season has already gotten off to a better start for the Top Fuel standout, she was the No. 4 qualifier at the Winternationals after running a 3.696-second pass, a confidence boost after welcoming a new team over the off-season, and although she lost first round, it was a pedal fest against her newest teammate, Austin Prock.

With a new group on board headed by David Grubnic and Mac Savage, the Advance Auto Parts crew is more than ready to do just that at Wild Horse Pass. The track has already been good to the team where, only a couple short weeks ago, they were able to fine tune and run a 3.700-second pass that they’ll be looking to not only repeat, but improve upon.

“We went out first round at Pomona to our new teammate Austin Prock but it was exciting to be back at the track. Coming in with a new team and transitioning from Alan Johnson parts to John Force Racing parts, we knew it would be a work in progress this season” said Force. “It might take some time to get an awesome tune up but we’re taking what we learned from Pomona and are hoping to get in the winner’s circle at Phoenix.”

Force has yet to pick up a win at the facility just outside of Phoenix but has a winning record of 11-6 with three final round appearances that came in 2014 and back-to-back in 2016 and 2017.

Wild Horse Pass is one of only two tracks where Force has raced against her now crew chief David Grubnic. The pair faced-off in the first round Force’s rookie season, 2013, with Grubnic picking up the win but in 2014, Force had the upper-hand and would go on to runner-up at the event. The only other facility where they raced against each other as drivers was 2013 at Texas Motorplex.