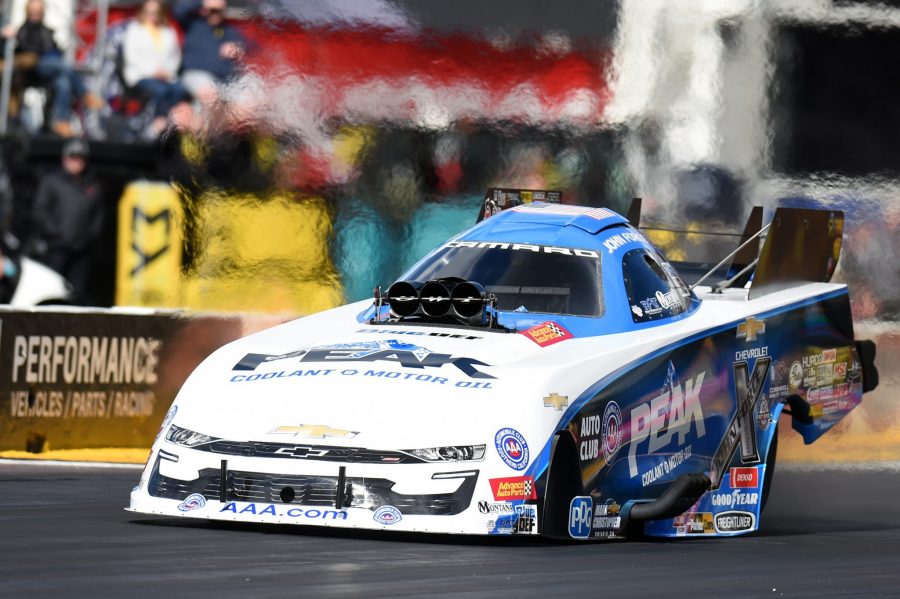 CHANDLER, Ariz. (Feb. 20, 2019) — Making his way to the Magic Dry Organic Absorbent NHRA Arizona Nationals, John Force and the PEAK Coolant and Motor Oil Chevy Camaro team are looking to build on the race day momentum from the season opener.

Force, who had an impressive finish at the Winternationals in Pomona, left fourth in the points standings after sweeping Matt Hagan and Ron Capps in the first two elimination rounds where he also set the record for the top speed of the event at 333.74 mph. The racing veteran would make it to the semifinals only to fall short against teammate Robert Hight after having a quicker reaction time at the tree.

“We had a good start in Pomona. We made some needed adjustments and got this thing going fast. Heading into Phoenix, I think we’ll continue to build on that and keep this car moving forward,” said Force. “We want to get win 150 so that’s what we’re striving for here.”

At the 2018 Arizona Nationals, Force was in a fiery explosion after winning the round that sent him across the track, crashing into Jonnie Lindberg in the next lane. It was the second of three consecutive wrecks for the racing legend but that only pushed him to focus on what was ahead. Something that still rings true going into the 2019 season and Phoenix in particular.

“We crashed last year at Phoenix but you know, it was a learning experience for us and we got past it. This has always been a race that’s good to me. I’ve been successful here, so has Robert and Brittany and I think Austin will too,” continued Force, who has a new team led by Brian Corradi and Dan Hood, who put Courtney Force in the winner’s circle at last year’s Arizona Nationals. “We made some notable runs at testing earlier this month so we have an idea of what we can do to get this hot rod from A to B and go some rounds.”

The sixteen-time Funny Car world champion is 63-26 at Phoenix and has won more races at the event than any other driver. He’s made 14 final round appearances with eight spent in the winner’s circle, half of which came consecutively from 1994-1997. He has also secured eight No. 1 qualifiers with his most recent in 2014.