ROBERT HIGHT WINS FOR THE 50TH TIME WITH AUTO CLUB 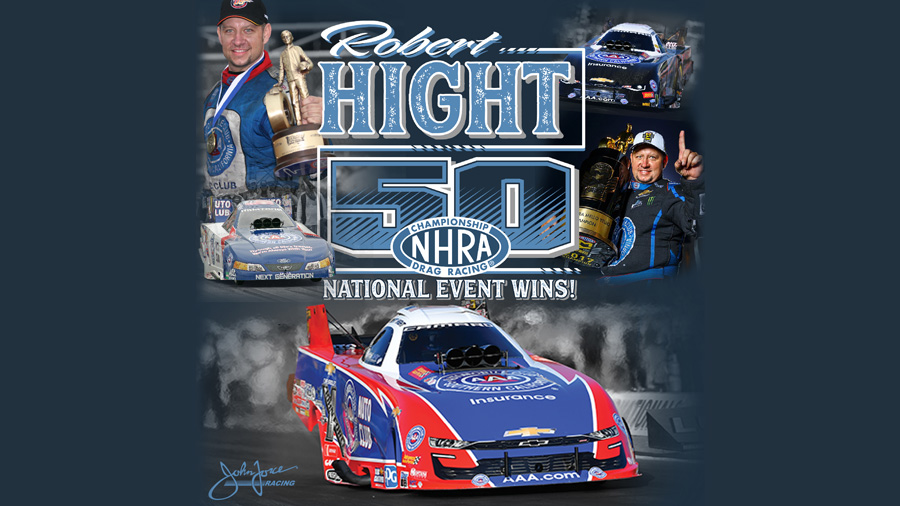 SONOMA, Calif. (July 28, 2019) — Racing on a Sonoma Raceway track that as a youngster nurtured his passion for drag racing, Robert Hight became just the 13th driver to win 50 times on the Mello Yello pro tour, repeating as Funny Car Champion by driving his Automobile Club of Southern California Chevrolet Camaro SS past Matt Hagan in the final round of at the 31st annual NHRA Sonoma Nationals.

On his way to victory, Hight became the first Funny Car driver to clinch a spot in the 2019 Countdown to the Championship which begins in September.

A 49-year-old native of Alturus, Calif., located in the far northeast corner of the state, Hight was a spectator at Sonoma Raceway as a teenager before being hired as a clutch technician at John Force Racing, Inc., where he ultimately won eight championships as a crewman on Force-driven Funny Cars before being promoted to Facilities Manager and, finally, President of JFR.

Assigned to the new position of JFR test driver in 2004, Hight got his big break the following year when he was given the reins of the Auto Club Funny Car. He responded by winning in just his fourth race (the NHRA Spring Nationals at Houston, Texas), finishing fifth in points and accepting the Auto Club’s Road to the Future Award as NHRA Rookie of the Year.

The No. 1 qualifier for the eighth time this season, the two-time series champion (2009 and 2017) benefited from a first-round bye before beating Blake Alexander in round two and Johnson Jr. in the semifinals. His four round wins Sunday moved him to within 10 of 500, one of the sport’s benchmarks.