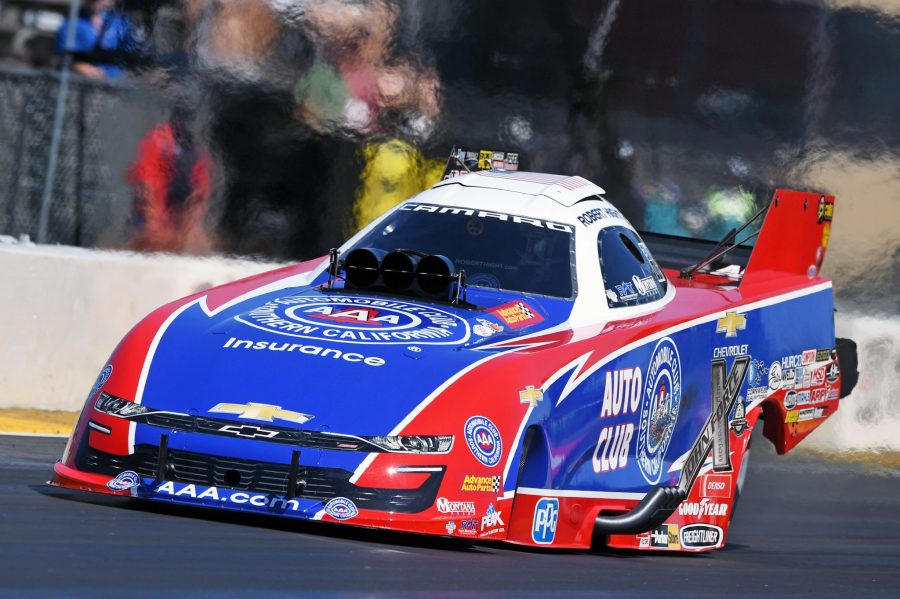 SONOMA, Calif. (July 27, 2019) — Robert Hight and the Automobile Club of Southern California Chevy Camaro SS team locked in the No. 1 qualifier spot for the eighth time of the 2019 NHRA Mello Yello Drag Racing Season at the NHRA Sonoma Nationals at Sonoma Raceway. Teammate John Force moved his PEAK Coolant and Motor Oil Chevy Camaro into the No. 7 spot, and in Top Fuel, Brittany Force moved up the ladder into eighth with her Carquest Brakes team, and Austin Prock is in sixth with the Montana Brand / Rocky Mountain Twist dragster.

After powering his Auto Club Chevy to an impressive 3.858-seconds at 334.65 mph, the top mile-per-hour of the 2019 NHRA season, on Friday night, Hight held onto his positioning through Saturday’s sessions to earn his third No. 1 at the Sonoma Raceway and 68th of his career. Hight opened the day with the quickest pass of the group when he made a solid 3.996-second pass at 320.28 mph to pick up three bonus points. He continued the momentum into the final session and launched his hot rod to 3.988-seconds at 321.42 mph. With the No. 1 spot, the defending Funny Car Sonoma Nationals winner earned himself a bye run in the first round of race day.

“Being No. 1 is big. Funny Car is probably the toughest class out here, I think, as far as competition, but usually the 15 and 16 car fields, if you make a good run first round, you’re going to win. It’s big, it gives you some confidence,” said Hight. “We’ve been in a lot of different conditions all year and to have eight No. 1’s, it shows the combination of all different conditions and that we’re consistent.

“I think you always have confidence when you do well at certain race tracks and I have done well here,” Hight said. “I’ve had a lot of big runs, won a couple times, set records, that all gives you confidence. Even though you can’t use what you did last year because the combination is different, it still gives you some confidence and that’s big.

“I want to say good job to the NHRA,” Hight continued. “They prepped this race track for four qualifying rounds as good as we’ve seen all year and you saw really, really good side-by-side racing. Fans are in for a great show tomorrow when you see close side-by-side racing like that.”

Brittany Force and the Carquest Brakes team ran a 3.975-second pass at 240 mph after hazing the tires down track in the third qualifying session keeping her in the No. 10 spot. In her second pass of the day at Sonoma Raceway, Force launched her David Grubnic and Mac Savage tuned dragster to a solid 3.754-second pass at 322.65 to move up the ladder and start race day from the No. 8 qualifying position. The 2017 Top Fuel world champion will face Mike Salinas in round one of eliminations.

“It was a big step up today for this Carquest Brakes team, we moved up two spots running a .75. It was an excellent run to end our day on and set us up on race day tomorrow,” said Force who earned three bonus points as quickest of the third session. “We face Salinas again and we’re hoping to take him out and go some rounds tomorrow.”

In his first run of the day, 16-time Funny Car champion John Force ran his PEAK Coolant and Motor Oil Chevy Camaro SS to a 4.003-second pass at 322.58 mph to stay eighth going into the final session. Force improved in the last round of qualifying when he made his best pass of the weekend, a 3.918-second run at 327.90 mph, that earned him the No. 7 spot and three bonus points. Force will go head-to-head with Tim Wilkerson in the first-round on Sunday.

“Brian Corradi, Danny Hood and Fabrisi did good. We’re in Sonoma and it’s exciting to be out here racing. Bruton Smith gave us a great race track. I’ve been coming here for 40 years or more and I’m happy we got in the show,” said Force. “That .91 was something this PEAK team had been looking for. I really thought it was going to get cooler through and more cars would improve. But we have a handle on it, my crew chiefs do, Brian Corradi and Danny Hood. So, I feel really good about tomorrow. We’ll see what happens.”

Third-generation driver Austin Prock opened Saturday’s qualifying with a 3.903-second pass at 315.49 mph in his Montana Brand / Rocky Mountain Twist dragster after shaking the tires but picked up two bonus points for being second quickest of the group. Prock drove his 11,000-horsepower machine in the final qualifying round to a clean 3.943-second pass at 313.07 mph but would secure his No. 6 qualifier off his 3.737-second pass at 327.90 mph on Friday night. He’s paired up with Leah Pritchett in round one of eliminations.

“We ended up sixth, that’s a good qualifying effort for the Montana Brand / Rocky Mountain Twist team after a good qualifying run in Q2. We struggled a little bit today. We didn’t run that good and we are all a little frustrated about it,” said Prock. “We think there’s something possibly wrong, we don’t know for sure but we’re assuming. We’re going to get it turned around and try and go some rounds tomorrow.”

Fans can tune-in to FOX Sports 1 (FS1) at 2:30 p.m. ET for coverage of final qualifying from Saturday night. Eliminations at the NHRA Sonoma Nationals begin Sunday at 11 a.m. FOX Broadcast Network will have live eliminations coverage at 5 p.m. ET.