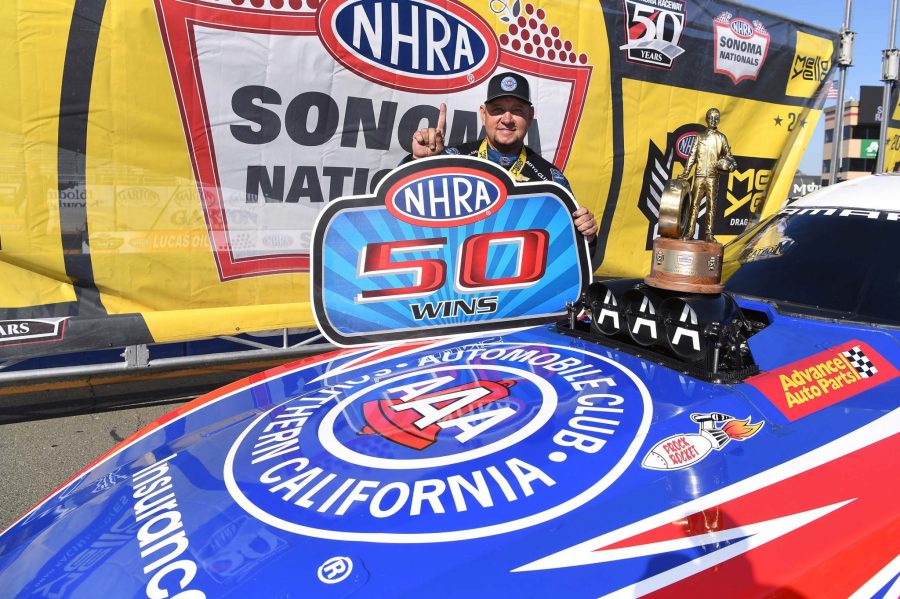 SONOMA, Calif. (July 28, 2019) — Racing on a Sonoma Raceway track that as a youngster nurtured his passion for drag racing, Robert Hight became just the 13th driver to win 50 times on the Mello Yello Drag Racing Series pro tour, repeating as Funny Car Champion by driving his Automobile Club of Southern California Chevrolet Camaro SS past Matt Hagan in the final round at the 31st annual NHRA Sonoma Nationals.

“It’s a milestone. I mean, if you look at the guys that have raced Funny Car there are a lot of big names, Kenny Bernstein, Don Prudhomme, the guys that when I was a kid, I watched on T.V. and they don’t have 50 wins in a Funny Car. That’s amazing. It’s hard to believe.”

Entering race day as the No. 1 qualifier for the eighth time this season and 68th time in his career, Hight earned a first-round bye. The Auto Club Chevy tuned by championship crew chiefs Jimmy Prock and Chris Cunningham took full advantage of the uncontested run crossing the finish line at 3.925-seconds at 327.35 mph, the second quickest run of the round setting him up for lane choice against Blake Alexander in the second round.

Hight improved to 3-0 against Alexander when he powered his Chevy to a 4.007-second pass at 323.35 mph bettering Alexander’s 4.055 at 303.98. Maintaining lane choice in the semifinals, Hight would be positioned in a classic John Force Racing vs. Don Schumacher Racing semifinal against veteran racer Tommy Johnson Jr. It was a clean drag race as Hight and the Auto Club team pulled away for the win with a 4.011-second pass at 323.19 mph to Johnson Jr.’s 4.046 at 318.54.

The seventh final round of Hight’s 2019 season would match him up with yet another DSR Funny Car, this time it would be two-time world champion Matt Hagan. It would be another close side-by-side drag race with Hight steadily pulling ahead after taking the starting line advantage. Hight would earn his 50th career victory, third at the facility and fifth in 2019 after handling the Automobile Club of Southern California Chevy Camaro to a stout 3.973-second pass at 325.45 mph to take out Hagan’s 4.030 at 316.60.

A 49-year-old native of Alturus, Calif., located in the far northeast corner of the state, Hight was a spectator at Sonoma Raceway as a teenager before being hired as a clutch technician at John Force Racing, Inc., where he ultimately won eight championships as a crewman on Force-driven Funny Cars before being promoted to Facilities Manager and, finally, President of JFR.

“I remember coming out here whenever they opened the gates and not leaving until zero dark thirty because I just wanted to see everything. I wanted to take it all in,” Hight said. “Watch the teams work on the cars, watch every bit of racing. I love alcohol cars and sportsman cars, and this is where it all started for me.

“Basically, the first national event I ever attended was right here, whenever this place opened and I’ve been to every single race as a fan, a crew member and now a driver. I never honestly dreamed I could get to drive a Funny Car. When I first saw these cars run I’d gone to Sacramento and saw the Governor’s Cup, it was a race they had there and believe it or not, it was John Force and Jim Dunn in the Fireman’s Quickie, it was the name of his car, and I saw these cars run and I thought they were super heroes. It’s like, no one could drive a car that accelerates and goes that fast. It just blew me away coming from a small town I never really was around this kind of stuff and when I first saw this it was like, this isn’t humanly possible and now I get to drive one and I still have to pinch myself because I never thought I’d ever get this opportunity,” continued Hight. “Really, it all goes back to the Auto Club. I’ve been driving for 15 years and they gave me an opportunity. John went to them and they took John’s word that I could do this because I was a nobody and I’d never driven anything. I’d worked on the cars but you know, my fourth race out, I got a win in Houston and it’s hard to believe I’m at 50 and third all-time.”

With Sunday’s win, Hight equaled his single season career best numbers for final rounds (7) and victories (5) and extended his current lead over second place Johnson Jr. to a whopping 199 points, roughly the equivalent of 10 rounds of racing. His four round wins Sunday moved him to within 10 of 500, one of the sport’s benchmarks.

Sixteen-time Funny Car world champion John Force started eliminations at Sonoma Raceway with a round one win over Tim Wilkerson when he raced his PEAK Coolant and Motor Oil Chevy Camaro SS to 3.917-seconds at 327.11 mph bettering Wilkerson’s 4.216 at 228.89. In his second run, the racing veteran put up a 4.111-second pass at 312.13 mph to Shawn Langdon’s 5.664 at 128.65 to advance to the next round. In the semifinals, Force was matched up against Matt Hagan but after the burnout couldn’t get his PEAK Chevy Camaro out of reverse to stage.

“Well, today didn’t go how we planned. I just couldn’t get the thing out of reverse in that last run, didn’t see it coming and we’ve had that problem a few times this year, in a semi or a final and we tried everything. I was almost going to whack it to see if I could get it to jump out. Boy, I got a stranglehold on myself, neutralized the clutch, shoved it in and let it out. I did everything to try and find that spot. I bent the handle off basically and it wasn’t going to go,” said Force who still has a hold on the No. 3 spot in the points standings. “Things happen but my guys gave me a great race car all weekend. I’m really proud of Robert and that Auto Club team. Fifty wins is a milestone and he started with us as a crew guy, now he’s driving and it was good to see him get that win.”

“We didn’t have a bad weekend. We made some really consistent runs, we ran the best of the weekend in the first round, ran a 3.71 and career best 335 mph,” said Force. “We’ve been running good all day, we just got beat second round but we turned this car around, we think we found some things and we’re going to take it to Seattle and see what we can do there.”

In the first round, Rookie of the Year candidate Austin Prock launched his Montana Brand / Rocky Mountain Twist machine to a solid 3.744-second pass at 327.66 mph to advance past Leah Pritchett’s 3.774 at 324.44. Prock faced eventual race winner Billy Torrence in the quarterfinals where he hazed the tires down track to run a 4.667-second pass at 177.67 mph and fall short of the semifinals to Torrence’s 3.838 at 307.09.

“We made some really good passes this weekend, better than it looked on the E.T. board. Both the .73 we ran and the .74, those were very, very competitive runs right with everybody in the hunt there, so I’m proud of that,” said Prock. “We just got a little greedy second round and tried to run 3.77 and the track just didn’t hold it. Racing those Torrence boys, you got to press and we pressed a little too hard today but all-in-all it was a good weekend, we’re tied for ninth in points and looking forward to Seattle.”