ROBERT HIGHT TRIUMPHS IN CHICAGO FOR FIRST WIN OF 2018 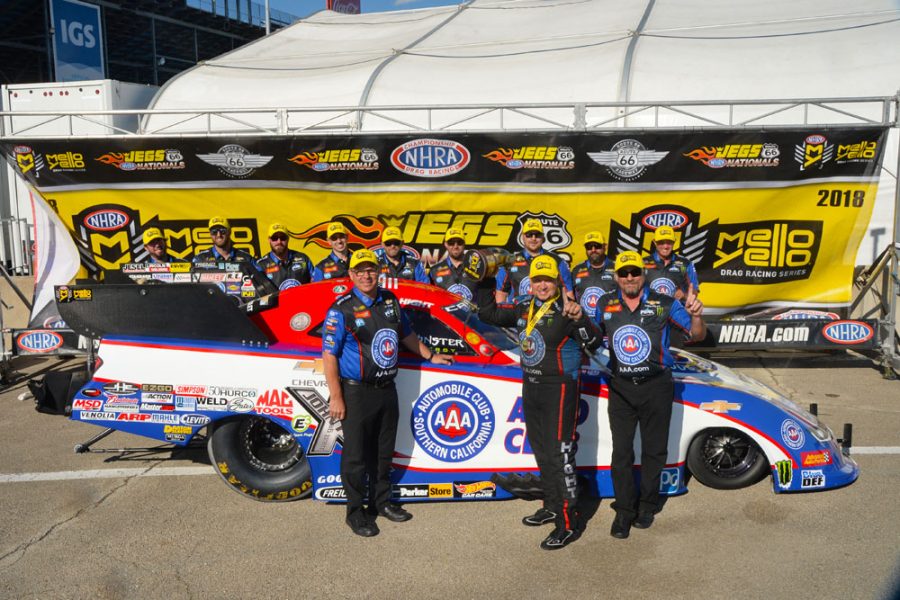 Reigning and two-time Funny Car world champion Robert Hight earned his 42nd career win, first of the season and first at Route 66 Raceway today. Hight defeated 2016 Funny Car world champion Ron Capps in the finals with a 4.073-second pass at 310.63 mph. It is the 14th consecutive year that Hight has won at least one race making him the only professional racer to win an event every year of his career. It also marks the 21st different event where he has celebrated a victory.

“I always thought Chicago might have my number because this is my fourteenth time racing here and I have never won this race. I have been in a couple finals and John Force has kicked my ass a couple times. I finally got it done today in Chicago. That is big because as a driver you want to win at every venue you go to. There is not a better place than Chicago. I can’t believe this place is 20 years old. I remember rolling in here as a crew guy and thinking look at how amazing this stadium is. This is one of the top spots in the country.”

At the opening of the day, Hight was qualified 12th after a tricky two days of qualifying.

“Qualifying didn’t go that well. I don’t even think I pulled the parachutes before first round. We just weren’t making it down the track,” Hight commented.

Hight’s line-up of opponents was stacked in a Funny Car class that is more competitive than ever. He had the task of defeating Cruz Pedregon in round one. Both spun the tires but Hight crossed the finish line first. Round two was a rematch of the Topeka final where Hight fell to teammate Courtney Force. This weekend, it was Hight who had the advantage laying down a 4.064 pass at 316.97 to advance to the semifinals. Hight took out rival Bob Tasca III with another 4.0 run of 4.076 at 315.12 en route to his final round match up against Capps.

“In the first round we spun and we dodged a bullet. Cruz didn’t make it down the track and I had to pedal it. We got by first round and after that we were able to get it and make clean passes,” Hight explained. “We had lane choice in the semis but then Capps ran better so we were back in the right lane in the final. That is what you are going to get every time you win a race. You are going to go up against a tough line up. There are no easy wins. You saw a lot of upsets first round. There are no easy ones in this class. I qualified 14th in Topeka and raced to the final and lost to Courtney. I was 12th here and it just shows you how tough it is out here. When you win one of these you definitely earned it. There is a lot of pride with a win.”

Last season, Hight picked up his first win late in the summer at the Denver event, winning this early in the season has Hight, only a third of the way in, excited for what the year could bring.
“It’s a great weekend for this Auto Club team in our fourth final of the year. Last year I won the championship and I didn’t win my first race until Denver so I am way ahead of last year, this could get really good,” Hight said.

The victory lands Hight solidly third in points behind only Courtney Force and Jack Beckman and ahead of event No. 1 qualifier Matt Hagan.

Coming into Sunday, three-time JEGS Route 66 NHRA Nationals winner John Force was optimistic and motivated to come out and win for the 149th time in his career. As the No. 6 qualifier Force had lane choice in the first round over Tim Wilkerson but he was also in a back-up PEAK Coolant and Motor Oil Chevrolet Camaro. His primary race car was destroyed in an on-track incident during the final qualifying session. The winningest driver was banged up but focused on going rounds on Sunday.

“It was tough physically, but I had a goal,” said Force. “I want to turn this PEAK car around here in their hometown of Chicago. I was really excited. I was qualified sixth. And then I got in trouble last night and I totaled the car, but we bounced back today. I thought I could win this race but we didn’t get it done. I went a couple rounds but my car ran good every round. Even though it’s just one race, I’m moved it back in the Top 10. We’ve still got nine races to go and my car is starting to act like a race car.”

The first round win over Tim Wilkerson moved Force up to 11th in the point standings and also showed he had the mental and physical toughness to compete. In the second round, Force took advantage of lane choice over veteran Jack Beckman and picked up another win that moved him into the Top Ten for the first time this season. His luck ran out in the semifinals against long-time friend and rival Ron Capps. Force made no excuses and took pride in the fact that he faced down a tough situation and came out on the positive side even if that didn’t mean standing in the winner’s circle.

“When I crashed I hurt myself. I got bummed up in the shoulders,” said Force. “I hit the wall really hard like three times. You have to love what you do. There’s a saying, some famous basketball player, it’s either LeBron James or Michael Jordan, they asked what made them so great and they said it’s because I’m not afraid of losing. They take that shot. I made some mistakes but I wasn’t afraid of losing. I think I can race with them now.”

Coming into the race after a tough start to the season that include multiple engine explosions and a handful of first round exits, Force found his mojo watching his grandkids start their careers as junior dragster racers.

“When I came here from watching my granddaughter Autumn and grandson Jacob down there in Barona, Calif., last weekend, I came out of there with a different heart,” explained Force. “I saw myself younger, dreaming the dream. I drove the truck down and back and I was part of that. I just had something a little different on my mind.”

The impact of Force racing today also made an impression on race winner and John Force Racing president Hight. In his pressroom interview Hight proudly talked about what a great leader Force was today to the entire organization.

“How about my boss John Force,” asked the assembled media. “You look at all he went through this weekend and to race to the semifinals. That was pretty impressive. You are not going to keep a guy like that down. There is a reason why he has won 16 championships. You can see how badly he wants this and how much he loves what he does. He was racing in front of his sponsor Old World Industries and PEAK here in Chicago. He was going to race no matter what. Things went his way and he drove well. I am really proud of that team.”

Funny Car points leader Courtney Force had a second-round exit to Hight. It was her first loss in nine rounds, she was coming off back to back wins at the Southern Nationals outside of Atlanta and the Heartland Nationals in Topeka, Kan., where Force beat Hight in the finals for the victory. Force defeated Jim Campbell in the first round after qualifying No. 4 off her 3.966 pass at 327.66 during the first session on Friday.

“It was not the race day we wanted. We got past first round but we dropped a cylinder over in the left lane. We tried to get it fixed up for the second round by unfortunately it did the same thing. I just tried to stay in the throttle and get down there. Robert got around me for the win. It was a great effort by my Advance Auto Parts team. We had a solid run and I think we will keep learning about running on these hot race tracks. We will take that info into the next three races now that we are going into the summer. We are going to see these conditions again. Robert got me a little out of the gate but we were still ahead of him past the 330 ft. mark. Once we dropped that cylinder his Auto Club Camaro just drove around me at the top end. We are going to focus on Richmond and the fact we held onto the points lead.”

Reigning Top Fuel world champion Brittany Force was consistent throughout qualifying in her Advance Auto Parts Monster Energy dragster. Tire smoke in Q1 led to adjustments and a slew of 3.7 runs for the eight-time event winner. She started race day from the No. 2 position off her impressive 3.721 pass at 329.34 from Friday night under the lights.

“We had a consistent car in qualifying. We made three out of four runs that were really outstanding. Sometimes you only get one good run in qualifying and then have to go into race day. The fact that we have had a consistent race car will just give us some confidence going to Richmond to see what we can do.”

In round one, Force faced off against a new opponent, Kyle Wurtzel, and was unable to make a clean pass down track coasting to a 4.292 pass at 239.06 mph.

“It was a tough first round for us. We were going back and forth about which lane to run about three times. We picked the right lane and it got a little out of the groove and went up in tire smoke. I tried to pedal it but there really wasn’t a lot I could do. Wurtzel was on a clean run and beat us to the finish line. The good news is we go straight to the next race and we don’t have time to think about this race.”

John Force Racing will continue on the NHRA Mello Drag Racing Series tour with a stop in Richmond, Va., for the NHRA Virginia Nationals at Virginia Motorsports Park June 8-10.