JOHN FORCE NO. 6 AFTER EVENTFUL ENDING TO QUALIFYING AT JEGS ROUTE 66 NHRA NATIONALS 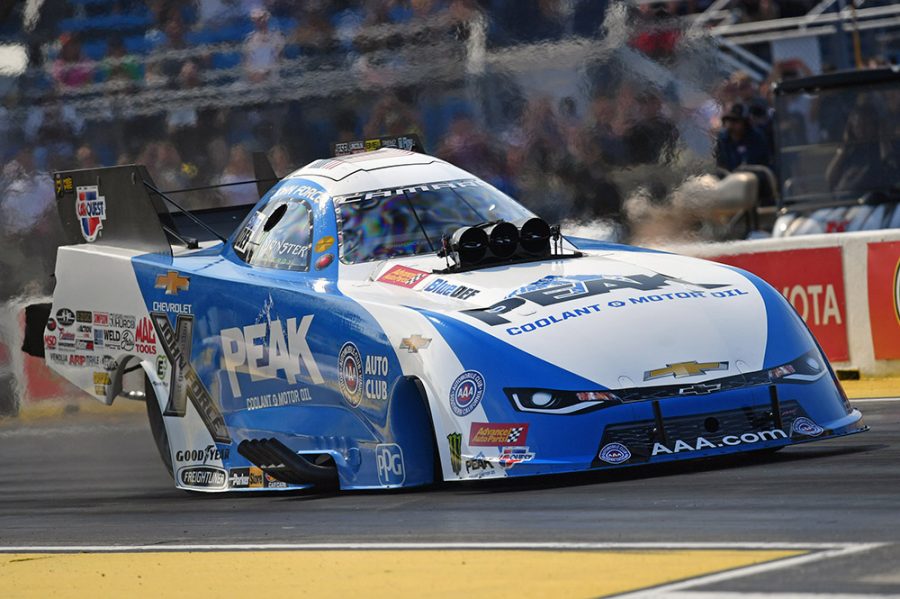 JOLIET, Ill. (June 2, 2018) — Despite an explosion and impact with the wall, team namesake John Force and his PEAK Coolant and Motor Oil Chevrolet Camaro SS will start the JEGS Route 66 NHRA Nationals Race Day from the No. 6 position. Brittany Force piloting the Advance Auto Parts Monster Energy Top Fuel dragster leads John Force Racing as the No. 2 qualifier, Courtney Force and her Advance Auto Parts team are in fourth and Robert Hight holds the No. 12 spot in the Auto Club of Southern California Chevrolet Camaro SS.

It was a wild ride for 16-time champion John Force during the final qualifying session. The winningest driver in NHRA history had a fiery run-in with the right guard wall while sharing the racetrack with daughter Courtney Force on Saturday evening at Route 66 Raceway. Force exited the vehicle under his own power and was fired up for Sunday’s eliminations.

“I gave it a quick pedal and it just shot to the right,” explained John Force. “I kept trying to get it off the wall but it kept pulling me over. I think the body might have been on the front tire and that affected the steering. I got it stopped and got out. I am sore but I won’t let this race car beat me up. I have PEAK and Old World Industries out here. We are going to pull out the back-up car and get to work. I love all the fans out here and I have to thank them for all their support.”

The start of the 2018 season was tough with three explosions in the first three races for Force. The legendary drag racer has stayed focused on the problem and has continued to make changes to move forward. The results have been noticeable — he has a runner-up finish and has now qualified in the top half of the field four times in nine races of a 24-race NHRA Mello Yello Drag Racing schedule.

“We had some things figured out and that run wasn’t anything like the start of the season. We are making progress with all three of the Chevrolet Camaros. Courtney’s hot rod is flying and I ran good yesterday. We are all trying to run fast. You have to out here against this competition,” added Force.

Force will face off against Tim Wilkerson, an opponent he is 35-19 against, in the first round off of his 3.971-second pass at 324.59 mph from the first session on Friday. His past success at Route 66 Raceway has Force confident he’ll be competing for the win on Sunday in his primary sponsors’ hometown. Force has three wins at Route 66 Raceway and six finals appearances. Two of those wins came from the No. 7 and No. 8 qualifying position and, in his career, Force has won nine times as the No. 6 qualifier.

With the exception of the first qualifying session, reigning Top Fuel world champion Brittany Force has been consistent in her Advance Auto Parts Monster Energy dragster. Tire smoke in Q1 led to adjustments and a slew of 3.7 runs for the eight-time event winner. She’ll start race day from the No. 2 position off her impressive 3.721 pass at 329.34 from the Friday night under the lights. Saturday, her team put together a 3.776 pass to be quickest of the third session and a 3.783 to be third quickest of the fourth session. Her team’s accuracy earned her a total of six valuable bonus points.

“I feel good going into race day. We are sitting in the No. 2 spot. I am comfortable in that spot,” Force said. “We have had some pretty awesome runs all weekend long. We have run well when it was cool, late at night and in the heat of the day today, twice. I am pretty happy with those runs. We will be paired up with Kyle Wurtzel first round and go from there.”

Force has one final round appearance at Route 66 Raceway and will be looking for her first win at the facility when she lines up against Wurtzel in the first round of eliminations on Sunday. It will be the first time the pair have raced each other and Wurtzel will be Force’s 37th Top Fuel opponent.

Courtney Force, who has dominated the Funny Car class, has yet to qualify outside the top four this season and has secured five No. 1s, three of which have led to race victories. She is riding the momentum of two consecutive No. 1 qualifiers and race wins.

Force’s consistency continues, the 11-time event winner will begin eliminations at the Route 66 NHRA Nationals from the No. 4 spot after a 3.966 pass at 327.66 from the first session on Friday.

“I think our Advance Auto Parts team will be ready for race day. I think we were trying to make some good runs in the heat and unfortunately we couldn’t get it down there,” explained Force who’s hot rod smoked the tires on both runs Saturday. “We are still feeding off that solid pass we had in Q1 to get us qualified in the top half of the field. We will have lane choice tomorrow and we will learn from today. We’ll move forward and hopefully have a long race day tomorrow. We didn’t have the consistency we were looking for in qualifying. We have a great team over here. I think it is awesome I don’t have to worry about tomorrow. We are all going to go into race day with a positive attitude.”

Like her sister, Force has yet to hoist a Wally at the Route 66 Nationals but has appeared in one final in 2012. She’ll begin her efforts for a first time win at the facility with a match-up against familiar opponent Jim Campbell.

Reigning world champion Robert Hight qualified No. 12 off his 4.073 pass at 267.85 from the second session on Friday. Qualifying was tricky for the 41-time event winner but starting from the 12th spot and racing Cruz Pedregon in the first round doesn’t scare Hight, who is coming off a runner-up finish at the Heartland Nationals in Topeka, Kan. where he qualified 14th and beat Pedregon in the first round.

“There isn’t a lot you can say. We were aggressive and I think we will have a good tune up for tomorrow,” Hight said. “Jimmy (Prock) and Chris (Cunningham) are looking at the data and we will be ready for Cruz. He is a two-time champion and tough competitor. I will have to be ready on the starting line. These are the races you want to race. We are starting from the No. 12 spot but I don’t think that means a lot. Two weeks ago, we raced to the finals from the No. 14 spot when we were in Topeka. I have a lot of confidence in this Auto Club team on race day. We make good decisions and if I do my job we will be OK. I am glad John is OK and we will all be working together to get all three of these Chevrolet Camaros ready for race day.”