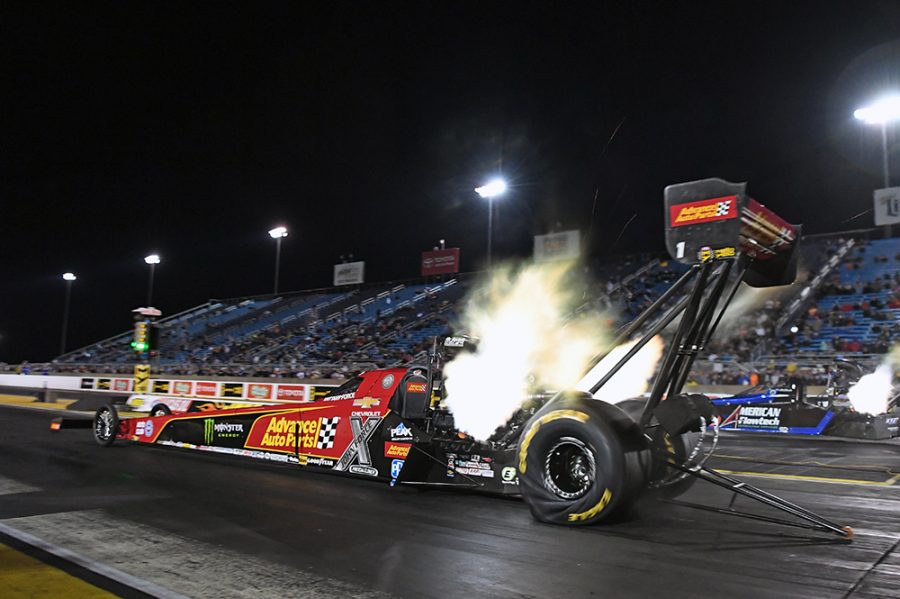 JOLIET, Ill. (June 1, 2018) — Reigning Top Fuel world champion Brittany Force took her Advance Auto Parts Monster Energy dragster to the No. 2 spot Friday night at the JEGS Route 66 NHRA Nationals at Route 66 Raceway outside of Chicago. Her sister and Advance Auto Parts teammate Courtney Force is in the No. 4 position, their father John Force is in sixth with his PEAK Coolant and Motor Oil team and John Force Racing President Robert Hight is in 10th in the Auto Club of Southern California Chevrolet Camaro SS.

Brittany Force began qualifying with tire smoke landing her in 12th after first qualifying session. As one of the first dragsters up in round two, she ran a stellar 3.722-second pass at 329.34 mph under the lights and jumped tentatively to the No. 1 spot. It wasn’t until the final pair of dragsters ran that she was bumped to No. 2.

“I am excited about this weekend. Our team has a whole new look with Advance Auto Parts and Monster Energy. The race car looks awesome. To go out there and make a run to get us to the top spot for a while was big. We got bumped back one spot but No. 2 is still a nice place to be,” Force said. “It was a killer run at 3.72 seconds. We have two more runs tomorrow to get even better. It is important to be in one of the top spots. That is where we want to be because that is where you get the best ladder. That means you have a good set up and you need that to go rounds on Sunday. It is tough to win from the bottom of the ladder. If we can stay up there at one or two we will be super happy going into race day.”
Brittany joins Courtney in the Advance Auto Parts colors for the next four races. It’s a partnership that she is excited about, especially with the way they have both been running so far this year — they both have been No. 1 qualifiers, both have race wins and were even No. 1s together.

“Absolutely it is great to share a sponsor with my sister,” said Force. “On my bucket list is for me to double up with her. I think that would be a dream. It would be even more amazing now that we both have the Advance Auto Parts red on our race cars and we have similar fire suits. This would be a great weekend to double up.”

Funny Car points leader Courtney Force is currently qualified fourth after her 3.966 pass at 327.66 in her Advance Auto Parts Chevrolet Camaro SS. The run was quickest of the first session and moved her around her father, John Force. The father-daughter duo lined-up against each other in the second session as they battled to retake the top spot. Both smoked the tires and coasted across the finish line.

“We had an awesome first pass for our Advance Auto Parts team. That was a great job by my guys. It was a nice solid run that got us three bonus points. We were in a pretty good spot,” Force said. It was nice to see my dad and his PEAK team make a great pass to get the top spot and we were able to slide around him. We went up there in the second session and we pushed it hard. I think we tried to make it run a little faster than the track could handle. At the same time, I think I could have driven smoother. We are just going to get it together for tomorrow.

So far this season, Courtney has dominated the Funny Car qualifying. She has yet to qualify outside the top four and has secured five No. 1s, three of which have led to race victories. She is riding the momentum of two consecutive No. 1 qualifiers and race wins.

John Force is in sixth off the efforts of his first session run of 3.971 at 324.59 in his PEAK Coolant and Motor Oil Chevrolet Camaro SS. The run briefly put him in the No. 1 spot until Courtney Force ran at the back of the pack to bump her father. Side-by-side, both Forces were unable to make it down the track.

“We had a clutch malfunction on that second run. It is just one of those things that happens. We thought the conditions were right for us to go out there and run 3.89 or 3.90 flat,” explained Force.

During the off weekend, Force had the chance to be a fan at his grandkids’ Jr. Dragster Race in Barona, Calif. It was Autumn Hight’s first win and Jacob Hood’s first race. It was an opportunity for Force to get back to his roots and reflect on what he loves about the sport, despite the difficult start to the season.

“I am feeling good about this race car. I joke but that weekend at Barona watching Autumn and Jacob made me a whole new person. It got my mind right to get back in a truck and trailer,” Force explained. “I love the fans and I love to drive this PEAK Camaro Funny Car. Out there tonight, I was like a little kid out there giggling on the burn out. I was thinking this is why I am out here; to have fun. I have a race car I can race with. It is going to have its struggles but it has been a while since I was one of the last cars down the track. It was good to be running beside Courtney. I watch her every week go low ET or winning races. I want to show her I still have the stuff. My race car thinks I am 20 years old and when I am in it I am 20. I will drive the shit out of it and win races.”

Two-time world champion Robert Hight currently holds the No. 10 spot after a 4.073 pass at 267.85 in the second qualifying session. Hight is coming off a runner-up finish at the Heartland Nationals in Topeka, Kan., his third runner-up of the season, and is looking to continue the momentum.

“We are still working on a few things with this Auto Club Chevrolet,” Force said. “It creates so much power we are having to really get a precise tune up to make it happy. We got a little better in the second session but the temperature was dropping pretty fast too. We have two runs tomorrow and I think we can step on it and get up towards the top of the field.”

Qualifying at the JEGS Route 66 NHRA Nationals continues Saturday with two sessions at 3:30 p.m. and 6 p.m. at Route 66 Raceway. Eliminations are slated for 11 a.m. on Sunday.