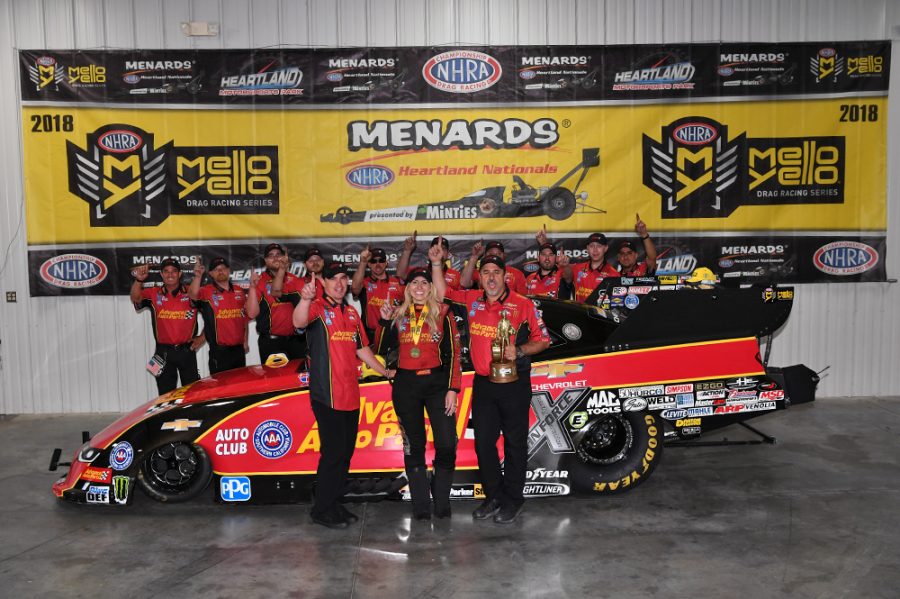 TOPEKA, Kan. (May 21, 2018) — Courtney Force secured her third win of the season, second consecutive, when she out ran teammate and reigning world champion Robert Hight in the Funny Car final Monday at the Menards NHRA Heartland Nationals at Heartland Park Topeka. It is Hight’s third runner-up finish of the 2018 NHRA Mello Yello Drag Racing Series season.

Courtney Force was able to pedal her Advance Auto Parts Chevrolet Camaro SS around Richard Townsend in the first round before powering her Funny Car to a 3.934-second pass at 328.54 mph narrowly defeating Matt Hagan and his 3.936 pass at 328.94 during the second round that took place Sunday night after an eight hour delay.

“It was a completely different day of racing when you compare the conditions from qualifying. We had to wait around eight hours and then had to pedal it in the first round. I actually had to pedal it a couple times but we were able to get that win light but we lost lane choice for the second round against (Matt) Hagan but man, my team laid down a solid number,” Force explained. “We gave it all we had and put it all out there with this Advance Auto Parts Camaro. It was a close race with Hagan and he is a great driver. I think we really gave the fans out there a really good show on that run. We really appreciate all the fans that stayed out here all day to support us.”

Monday morning, Force got around J.R. Todd when she ran an impressive 3.895-second pass at 330.39 mph in the semifinals, setting low ET of the meet. In the finals, Force earned the win over her teammate with a 3.928 pass at 329.83 for the 11th win of her career. Force dominated the category all weekend long, laying down the quickest runs in two of the four qualifying sessions while securing her fifth No. 1 qualifier of the season. Force has won each of her three Wally’s from the No. 1 qualifier position.

“It’s been really insane. I’m proud to be part of this Advance Auto Parts team. Being in the points lead, coming off of a back to back win, it’s just insane. I got on my radio and told my guys that they are just unbelievable. It’s so much fun driving this race car and it’s been a handful out here this weekend,” Force said. “Coming to a track where the conditions have changed drastically every single day, I have to give a lot of credit to my crew chiefs Brian Corradi and Dan Hood and every single guy on my team. It was a Sunday morning race that turned into a Sunday 7 p.m. race with a cooler track. We were able to get it done even with a lucky first-round win having to pedal it down there. We lost lane choice in the second round but still were able to turn the win light on and make it a little bit longer weekend. Having to run on a Monday makes for a long weekend, but it feels good to be in the winner’s circle with my team and celebrate for everyone at Chevy, Advance Auto Parts, PEAK, Monster, Auto Club and all our partners.”

After a 2017 season where Force and her Advance Auto Parts team earned seven No. 1 qualifiers with five finals appearance but no wins, the start to the 2018 season has been a welcomed respite.

“To be completely honest, everyone’s talking about the fact that we had so many No. 1 qualifiers but didn’t seal the deal last year. I had such a great team and pretty much the same team as I do this year,” Force explained. “Ronnie Thompson and Dan Hood were tuning my car and getting us all those No. 1 qualifiers last year, and we came close to a couple wins. This year, Brian Corradi came on board joining with Danny and one or two guys who joined the Advance Auto Parts team and things kind of shifted and we were able to get these No. 1 qualifiers and seal them off with a win. It feels amazing.”

It is Force’s second time winning back-to-back races, the first was in 2014 when she won the Dallas and St. Louis events and it is the first time she has won an event at the same venue twice, she won at Heartland Motorsports Park in 2014. Force remains the NHRA Mello Yello points leader. This was the third time Force and Hight had faced off in a final round, and the first time Force had raced to victory.

Hight, who struggled throughout qualifying landing in the No. 14 spot, pedaled his way out of the first round defeating Cruz Pedregon. In round two, Hight drove his Auto Club of Southern California Chevrolet Camaro Funny Car to a stellar 3.924 pass at 330.23. During Monday’s semifinal round, Hight powered to a 3.911 pass at 330.55, setting fastest lap of the event to take out Shawn Langdon who coasted across the finish line.

In the final, Hight had to concede lane choice to his teammate and smoked the tires towards the finish line of the trickier right lane to finish the day with a 4.087 pass at 265.90 for his third finals appearance of the season, 26th of his career.

“Considering we qualified 14th and we got our act together on race day and got to the final I’m pleased with that. Really couldn’t lose when you have two Chevys in the final. Third runner-up of the year. We want to win. We’ll take the runner-up but I also feel that we learned a lot and we’re going to be better from here out,” Hight said. “I’m looking forward to four in a row, excited about that and love racing every weekend. We’ll come to Chicago with the eye of the tiger and we’re going to win some races in the next four. We moved up to fourth (in points). We’re on the move up.”

Reigning Top Fuel world champion Brittany Force opened eliminations as the first pair down the newly dried race track. She piloted her Monster Energy dragster to what was the quickest time of the event, a 3.723 pass at 328.06 mph, before being over taken by Steve Torrence with his 3.684 pass in the second round.

“I am proud of this team especially after this weekend. All the ups and downs and an eight-hour delay before first round. It is not easy to go up there,” Force siad. We made our best run of the weekend in first round. We really stepped up our game and thanks for Alan Johnson and Brian Husen. These Monster Energy guys were awesome and unfortunately in that second round the other guy got around us. Our day ended a lot earlier than we wanted. We will head home and be ready in two weeks for Chicago.”

The long weather delay affected every team and as the third John Force Racing Funny Car to hit the track in the first round No. 11 qualifier and sixteen-time Funny Car world champion John Force was in a tough spot. Both of his teammates had advanced after winning pedal-fests so track conditions were a major concern for all the teams. At the hit of the throttle Force’s PEAK Chevrolet Camaro Funny Car overpowered the track. The winningest driver in NHRA history had to watch as his opponent pulled away while he tried to get his Funny Car to reel him in.

“You never know what is going to happen when you have to wait all day on rain delays and the temperatures drops so dramatically,” said Force.