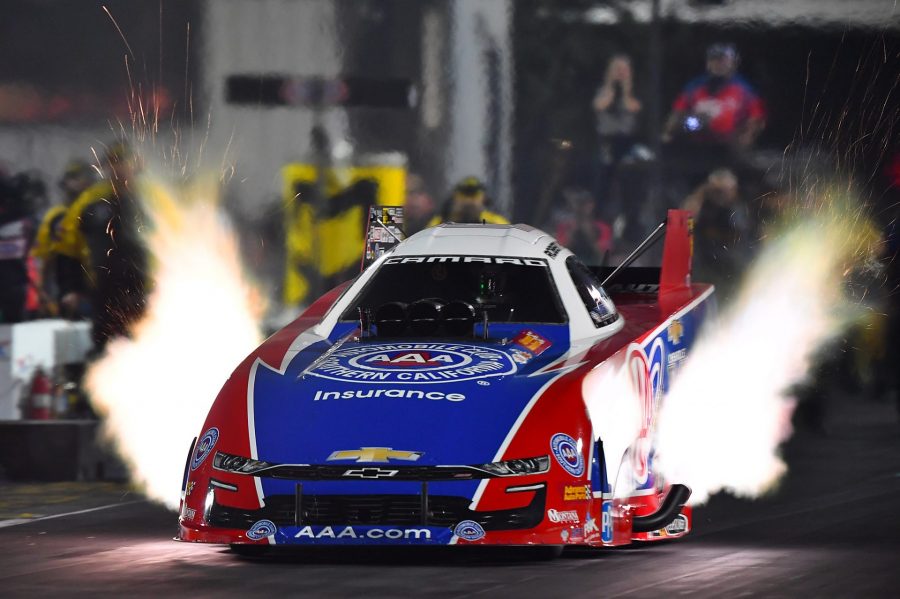 ST. LOUIS (Sept. 27, 2019) — Robert Hight and the AAA Missouri Chevrolet Camaro SS Funny Car team stole the show under the Friday night lights to sit in the provisional No. 1 spot at the AAA Insurance NHRA Midwest Nationals at World Wide Technology Raceway. John Force with the PEAK Coolant and Motor Oil / BlueDEF team and Austin Prock with Montana Brand / Rocky Mountain Twist both held their own to sit No. 3 in their respective categories and Brittany Force and Advance Auto Parts are 16th with two qualifying passes left.

Robert Hight and the AAA Missouri Chevy Camaro SS team came out strong in their first qualifying session running a 3.974-second pass at 324.28 mph that earned them two valuable bonus points for being second quickest of the session. Hight kept it consistent with his second run coming out to put a stellar 3.877-second pass at 334.90 mph on the scoreboard. Not only was it the quickest Funny Car run of the day but also the fastest speed of the event.

“We stayed and tested Monday in Reading so I knew we’d come out here and run that. There are very few days you have a test session that’s as productive as that one. Obviously, you don’t know exactly how it shakes up until you get to another race track and you compare yourself to everyone else but we had high hopes. I mean, we made four really good runs during testing and usually when you try to fix the car from spinning the tires, it slows down but Jimmy Prock was not going to let this thing slow down,” said Hight who is looking to earn his fourth consecutive No. 1 qualifying position at the Midwest Nationals and defend his fiery 2018 victory at the event. “We were able to get it manageable and keep it fast so it’s pretty exciting and to do it here in AAA country, a sponsor’s race, it’s a good way to shine and show off.”

Continuing his hot streak, John Force took the PEAK BlueDEF Chevy Camaro SS to a 3.999-second pass at 319.98 mph in the first session going straight down the groove for the fourth quickest pass at World Wide Technology Raceway. With header flames lit and pyrotechnics adding some excitement, Force handled his Chevy to a 3.911-second pass at 329.18 mph that put him at the top of the pack until Hight and Bob Tasca III came up as the final pair to run the two quickest laps of the night. Force landed in the provisional No. 3 position, good enough for a bonus point.

“Today went good. I have a great race car and we ran good today. We’re No. 3 right now so we’ll see what happens tomorrow,” said Force. “Testing went good for Robert at Reading and it showed, Austin Prock did a good job today and Brittany with Advance Auto Parts, they have tomorrow and they’ll figure it out but my PEAK BlueDEF car is in the hunt with a bunch of them.”

Coming off a semifinal finish in Reading, Austin Prock powered his Mike Green and Ronnie Thompson tuned Montana Brand / Rocky Mountain Twist dragster to a solid 3.808-second pass at 324.44 mph. Prock continued the momentum in the night session when he lit up the scoreboard with a 3.726-second pass at 328.94 mph that earned him a bonus point to be third quickest of the session despite having an engine explosion at the far end of the track.

“Great start to our weekend here at the second race of the Countdown in St. Louis. We were fourth quickest in the first session and then third quickest in the second and ended up qualifying third tonight, got ourselves one little bonus point which that could be a spot or two here at the end of this thing,” said Prock. “I’m really proud of my guys. We figured out why this thing was popping the blower off it. It didn’t tear too much stuff up but just not a fun thing to do. We’re going to get it sorted out and hopefully go get some more points tomorrow.”

Brittany Force and the Advance Auto Parts team will be looking forward to the two additional qualifying runs on Saturday after having trouble during Friday’s sessions. On their first go at World Wide Technology Raceway, the Advance Auto Parts dragster dropped a cylinder down track to run 4.055-seconds at 228.11 mph and on their night run, it smoked the tires and shut off early crossing the finish line with a 5.172-second pass at 131.64 mph.

“We had a rough start today in St. Louis. We had two runs, didn’t make it down there but we’re changing some things on the car and it’s going to take a few to figure it out. Currently sitting in the 16th place but I’m not worried though,” said Force. “I have a great team behind me with David Grubnic, Mac Savage and the Advance Auto Parts boys. We get two more runs tomorrow before going into race day so we’ll see what happens.”

The second day of nitro qualifying at the AAA Insurance NHRA Midwest Nationals, the second of six events in the NHRA Mello Yello Countdown to the Championship, gets underway with sessions at 2:30 p.m. and 5:15 p.m. at World Wide Technology Raceway.