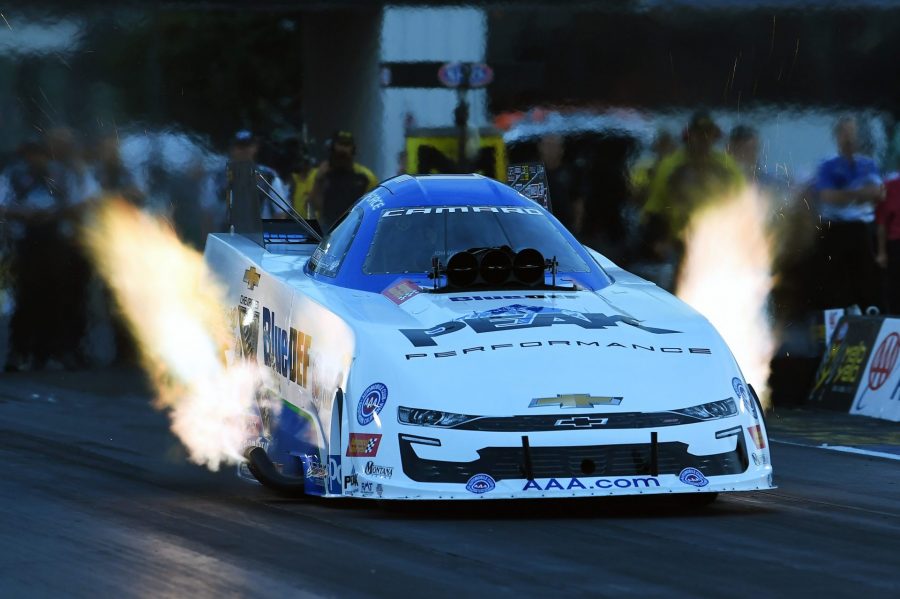 ST. LOUIS (Sept. 28, 2019) — John Force handled his PEAK Coolant and Motor Oil / BlueDEF Chevrolet Camaro SS team to the No. 1 qualifier spot for the fourth time of the season Saturday night at the AAA Missouri NHRA Midwest Nationals at World Wide Technology Raceway. Teammate Austin Prock held onto the No. 3 spot with his Montana Brand / Rocky Mountain Twist hot rod, and Robert Hight and the AAA Missouri team and Brittany Force with Advance Auto Parts will both start race day from fourth.

Sixteen-time Funny Car world champion, John Force strung together four quality passes through two days of qualifying at the Midwest Nationals that ended with his fourth No. 1 position of the season, 159th of his career and third at World Wide Technology Raceway.
Starting the day sitting in the No. 3 spot, Force kept his performance consistent handling his PEAK Coolant and Motor Oil / BlueDEF Chevy Camaro SS to a 3.911-second pass, identical to his Friday night pass with a slightly faster speed of 328.22 mph. In the final qualifying session of the Midwest Nationals, Force handled his Chevy Camaro to a blistering 3.842-second pass at 334.40 mph.

“It’s been consistent all weekend, ‘Old Blue’ my PEAK BlueDEF Camaro. It ran a .99 in the first session then ran a .91 and .91 again. I didn’t think it would step up and run better than an .85,” said Force who will line up with Terry Haddock in round one of eliminations. “Corradi said let’s just see what it’ll do. Brian Corradi is a different guy than an Austin Coil. We all come from different ways of life. Corradi and I, we go around about stuff but he was really concerned about my race car, with hurting me, and that really mattered to me. He said that in a meeting we had a couple days ago and then again today and so I found some heart in there and that matters to me that way. He surrounds himself with a great team, my son-in-law Daniel Hood, Ashley’s husband, and Tim Fabrisi and all these young kids. They really want a shot at the top and I want a shot too. I’m the old kid in the family but I’m starting to get my head right racing with Corradi and we just have to learn how to understand each other.

“Corradi said what it would do and it did it,” continued Force. “I really thought Robert Hight or even Hagan might pull it out because they had nothing to do but go for it, but we got it, got that No. 1. We come here with AAA Missouri and it’s very important that Robert or I or Prock or Brittany get it done. This PEAK team got it tonight. It was a good night for me and hasn’t even sunk in yet.”

Under overcast skies and cooler conditions, Brittany Force and the Advance Auto Parts team quickly moved themselves out of the No. 16 spot they found themselves in after Friday’s qualifying by running a 3.718-second pass at 325.61 mph, despite blowing the head gaskets off, that jumped her into No. 6. Force closed out her qualifying efforts with an impressive 3.708-second pass at 331.12 mph to secure the No. 4 spot, tying her best qualifying effort at the Midwest Nationals in 2015, the same year she raced her way to the semifinals. Her improved performance will put her against Pat Dakin in the first round of eliminations.

“This Advance Auto Parts team had a good day out here in St. Louis. David Grubnic, Mac Savage and the Advance Auto Parts boys, we really stepped it up. We ran a .71 in that first run today and then a .70 in the last one, moved us all the way up to No. 4. It’s always great to come out and put on a good show for the fans, especially at a sponsor’s race,” said Force. “AAA has been really good to John Force Racing so to step it up today was really important. We race Pat Dakin tomorrow and we’ll be looking to keep things going in the right direction which is what we want early in the Countdown to the Championship.”

Already with two solid qualifying passes under his belt, rookie Austin Prock and the Montana Brand / Rocky Mountain Twist team kept the momentum rolling with a 3.707-second pass at 332.10 mph that had him picking up two additional bonus points. Prock’s time would hold as third quickest as he laid down another solid 3.712-second pass at 330.55 mph. His No. 3 spot is his second of the season and his best race day start.

“It’s been our best weekend so far for this Montana Brand / Rocky Mountain Twist team. Our car has been performing at the top of the charts all weekend long and we got the No. 3 qualifier spot,” said Prock who races T.J. Zizzo round one. “I’m excited to see what we can get done tomorrow and if we can keep it up, I think we’ll be hard to beat.”

Entering the day sitting No. 1, Robert Hight and his AAA Missouri Chevy Camaro SS team ran into some trouble on their third qualifying run and had to shut off early to a 5.106-second pass at 145.94 mph. Hight and the AAA team got back on track for the fourth and final session when they matched their Friday night elapsed time of 3.877-seconds and crossed the finish line at 331.61 mph. Hight will begin race day from the No. 4 to face Bob Bode in round one.

“Not a bad day for the AAA Missouri team, we were able to match our pass from last night and we’re right there in the mix. Race day is going to be exciting. Every point counts, I gained a couple yesterday but John put on a show tonight,” said Hight. “These AAA boys will be working hard tomorrow with Jimmy Prock and Chris Cunningham to defend our win from last year, just hoping to do it with a little less fire. It’s a AAA race so we’re hoping to celebrate with them in the winner’s circle, especially since we didn’t get to do it last year. We’ve done well at the AAA events so hopefully we can keep it up.”