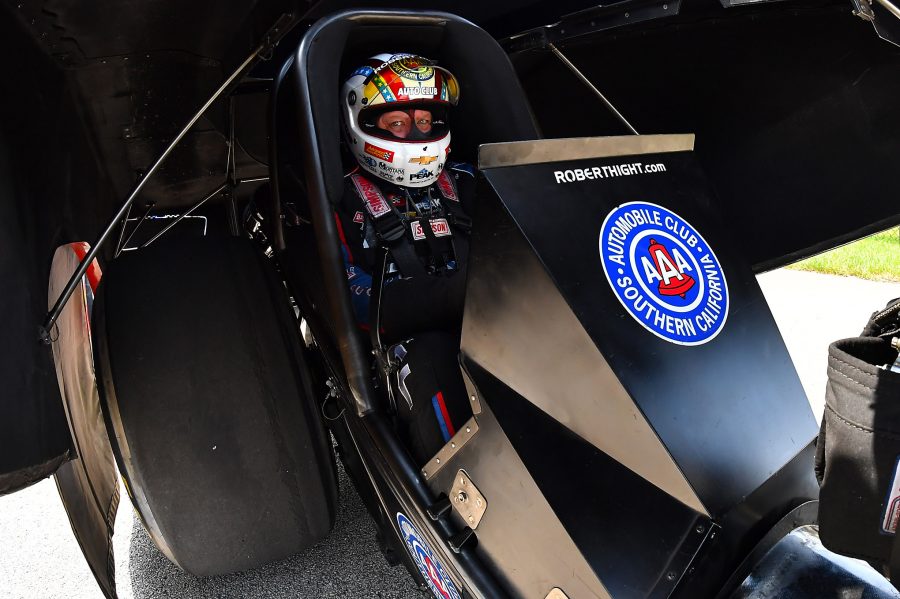 JOLIET, Ill. (June 2, 2019) — Robert Hight and the Automobile Club of Southern California Chevrolet Camaro SS Funny Car team raced their way to the finals of the Route 66 NHRA Nationals and a 168 lead in the NHRA Mello Yello Drag Racing Series points standings Sunday at Route 66 Raceway. John Force and the PEAK Coolant and Motor Oil team exited in the semifinals to shift into fourth in points while, in Top Fuel, Brittany Force and the Advance Auto Parts team are also fourth and Austin Prock with Montana Brand / Rocky Mountain Twist remain inside the top ten after both ended their day in the first round.

Following his No. 1 qualifier pass from Saturday evening that catapulted them from the No. 14 spot, Hight and the Auto Club team came up to the first round and defeated Jim Campbell with a 4.040-second pass at 262.33 mph after smoking the tires down track and having to back off the throttle. Campbell had a 4.044 at 314.39.

Hight never trailed in his quarterfinal victory over long-time rival Cruz Pedregon. The Auto Club Camaro ran 3.956-seconds at 328.46 mph to Pedregon’s 4.030 at 298.21. The win led to a match-up with veteran racer and 2012 Funny Car champion Jack Beckman. Hight made a pass of 4.105-seconds at 239.40 mph but the numbers at the finish line didn’t hold any weight, the race was over when Beckman left early at the tree and red lit.

In his fourth final round at Route 66 Raceway, sixth of the season and 66th of his career, Hight faced familiar foe Tommy Johnson Jr. It was an eventful final race with Hight taking the starting line advantage and hazing the tires and Johnson Jr.’s Funny Car suffering an engine explosion. The final result would be a 4.438-second run at 202.55 mph for Hight while Johnson Jr. would hold on for a 4.175 pass at 229.86 mph and the win.

“It’s always a bummer when you can’t get the win. I think it was a bit of luck that we were in the finals in the first place. We smoked the tires, Beckman had a red light, but that’s how it goes sometimes,” Hight said. “We’ve still got some work to do to run in the heat. We’ve made some changes and now we’ve just got to put it all back together again. I have all the faith in this Auto Club team and Jimmy Prock and Chris Cunningham. We’ll be ready to get after it in Topeka.”

John Force and the PEAK Coolant and Motor Oil Chevy Camaro team started race day from the No. 11 qualifier spot and closed out the weekend with their fifth semifinals appearance of the season. The third-round finish moved them to fourth in the NHRA Mello Yello points standings.

“I have a good race car. My guys, Brian Corradi and Danny Hood, they’ve really put in a lot of hard work to get this thing running how it is and I’m learning from them. We didn’t get to the final but that was driver error, I was late on the start, we made some changes that I’m still getting used to, and I just couldn’t get it after that,” said Force. “We’re going to Topeka next weekend and I’m ready, ready to get after it and win the thing for PEAK. Robert did good today, made it to the finals with Auto Club, Brittany and Advance will get things turned around and Austin Prock, he did good today and Mike Green will get Montana Brand / Rocky Mountain Twist to go some rounds. We’ll all be ready next race.”

Rookie of the Year candidate, Austin Prock and the Montana Brand / Rocky Mountain Twist team had an early exit on race day during round one of eliminations. In a close round one match up, Prock piloted his dragster to a 3.770-second pass at 327.51 mph but fell short of a second-round appearance to Richie Crampton’s 3.758 at 322.73.

“We came on the wrong side of a close race again today. Ran 3.77, that was a good run for our team, a good rebound. Mike Green and the boys are working hard trying to get this Montana Brand / Rocky Mountain Twist dragster going down the race track and we made a respectable run,” said Prock. “I left first and got beat by seven thousandths so it hurts when you get beaten in a close race like that. I’m beating myself up because I know I can leave the starting line better than I did. I was .065 but I know I can dip into the .040s, so I wish I could have done that this morning and got us a round win for our team.”

Like her teammate, Brittany Force also had an early exit Sunday. In the first round, Force smoked the tires and shut off early to run 5.776-seconds at 112.30 mph in her Advance Auto Parts dragster. She was bettered by longtime rival, Antron Brown’s 3.736 at 327.11. The round loss would move Force to fourth in the NHRA points standings only two points shy of her previous No. 2 spot.

“We’re staying positive. You can’t go up every single weekend, you have to come down at some point. You know, we really struggled coming into this weekend, lowest we’ve qualified this year, 15th, but I put all my faith in this Advance Auto Parts team and I know we’ll figure it out,” said Force. “We made some changes in the off weekend so we’re figuring it out. We go right into the next one, four in-a-row and you know, we’re hungry. We’re looking for a win and see if we can do it at this next one.”