ROBERT HIGHT AND AUTO CLUB EARN SIXTH NO. 1 OF THE SEASON AT ROUTE 66 NHRA NATIONALS 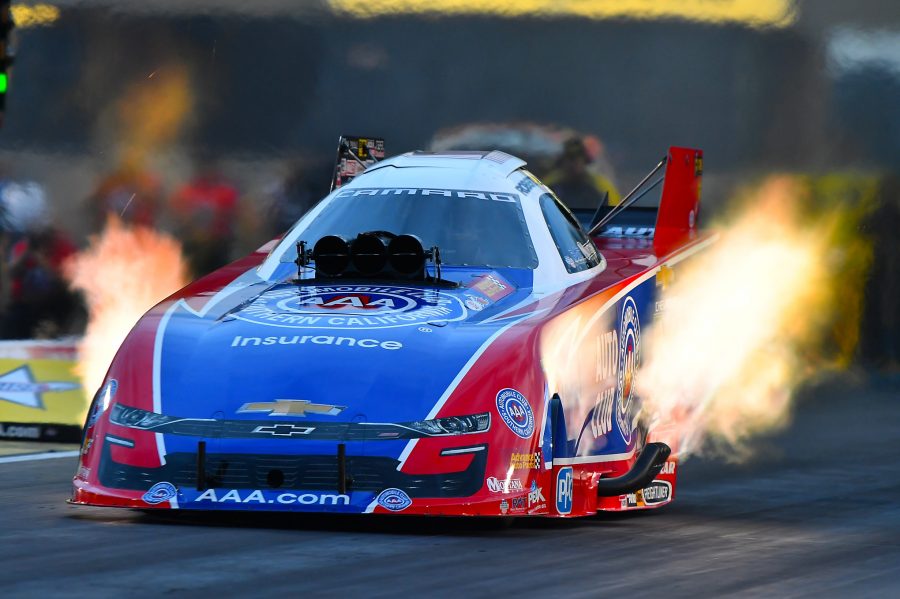 JOLIET, Ill. (June 1, 2019) — After a nearly three-hour weather delay that created ideal track conditions, Robert Hight landed his sixth No. 1 qualifying position of the season Saturday night at the Route 66 NHRA Nationals at Route 66 Raceway. In the No. 14 spot heading into the final session, Hight powered his Auto Club of Southern California Chevy Camaro SS Funny Car to a stout 3.880-second pass at 334.24 mph to make the jump to the top spot. John Force and the PEAK Coolant and Motor Oil team will start race day from No. 11, in Top Fuel Austin Prock with Montana Brand / Rocky Mountain Twist are No. 6 and Brittany Force and the Advance Auto Parts machine are No. 15.

Sixes are wild for Robert Hight as he picked up his sixth No. 1 of the season and 66th of his career at Route 66 Raceway. It also marks his fourth No. 1 at the facility as he chases his fourth win of the season and looks to defend his victory from 2018. The top spot was hard earned for the Auto Club team as they struggled through three qualifying runs smoking the tires and overpowering the track. The Jimmy Prock and Chris Cunningham tuned Chevy went 4.032-seconds at 258.67 mph, 7.359-seconds at 90.04 mph and 4.380-seconds at 206.67 mph before laying down their 3.880-second pass.

“It’s pretty awesome to have 66 No. 1s. It shows you have a great team, just everybody around you, they’re doing their jobs. Really, I call that a perfect storm that we had roll through here today. Basically, we wouldn’t have been in the top half of the field if that rain delay hadn’t happened. If we were gonna go up there and run as planned, we were in the bottom half and I don’t know if we would have been able to make that jump,” said Hight. “Normally you wouldn’t look at that as a positive because it’s not conducive to what you’d have on race day but tomorrow it is.

“Jimmy kept saying all weekend that its down on power and so the conditions were there tonight and he gave it the power and it stuck,” continued Hight who is scheduled to face Jim Campbell in the first round. “I knew going up there, being another night run, that it was going to either be real fast or wasn’t going to make it and I’d know by 60-feet if we’d be in trouble. It was a great run. I’m loving the conditions we’re going to have tomorrow. It’s going to cool down, we’re going to have great conditions and four more of those same runs tomorrow, I think that’s a yellow hat.”

After a solid first session pass on Friday that put him in the No. 5 spot coming into the day, Prock and the Montana Brand / Rocky Mountain Twist team had to click off after going up in smoke early to run 6.236-seconds at 100.37 mph. They ran into more trouble in the final qualifying session only running 5.102-seconds at 139.80 mph. However, the struggles were not isolated and Prock slipped only one spot into No. 6 with his 3.769-second pass at 321.19 mph from Friday. His position ties his best qualifying effort, he was also No. 6 at the Arizona Nationals.

“We struggled a little bit today. We’ve been fighting gremlins all weekend, having problems with our RacePak computer and scuffing some pistons so we think we have it all sorted out, we think we found some problems so we’re going to get it all spiffed up and go win some rounds tomorrow,” said Prock, who will race against Richie Crampton in the first round for the second consecutive race weekend. “We got a tough side of the ladder but we have to beat them all to win so we’re going try and do that, and get this Montana Brand / Rocky Mountain Twist dragster in the winner’s circle.”

On the road to his 150th NHRA Mello Yello career win, John Force and the PEAK Coolant and Motor Oil Chevy Camaro team will start race day from the No. 11 qualifying position. The sixteen-time Funny Car world champion started day two of qualifying in the No. 8 spot and kept his positioning after dropping a cylinder and running a 4.146-second pass at 252.60 mph. Heading into the final session, a rain delay put the Funny Car class on hold but also created cooler conditions. As the seventh pair of Funny Cars to take the starting line, Force was moved to No. 12 but would improve from the third session to run a 3.948-second pass at 326.48 mph and snag the No. 11 spot.

“We made a lot of changes to the car and Corradi said we lost a cylinder in the first run today but the second run was clean. You know, the way the car flexes and stuff, we’re looking for any answers but we’re gonna stick with it and see what we can run tomorrow. A .94 isn’t impressive so we’ll see what we can do,” said Force who will race reigning world champion J.R. Todd in round one. “Robert and Auto Club went to the top, Brittany is in with Advance and I think she can get it done, and the Prock kid, he’s in too with that Montana Brand / Rocky Mountain Twist dragster. Tomorrow should be a good day of racing.”

Coming into the day in the No. 12 spot, Brittany Force and the Advance Auto Parts team initially struggled on Saturday running a 6.579-second pass at 92.56 mph after smoking the tires and having to step off the throttle. The team improved in the final session to 3.965-seconds at 316.30 mph but will enter race day in the No. 15 spot off the efforts of the 3.819-second run at 320.36 mph from Friday evening.

“Little bit of a rough start this weekend for the Advance Auto Parts team out here in Chicago. We made a lot of changes in the off weekend trying to figure out this car going into the heat, into summer and these next handful of races,” said Force who will race three-time world champion Antron Brown to open eliminations on Sunday. “We qualified 15, definitely not our best position but we want to go out and win the thing tomorrow. We face Antron, we’ve beat him before and that’s the plan tomorrow.”