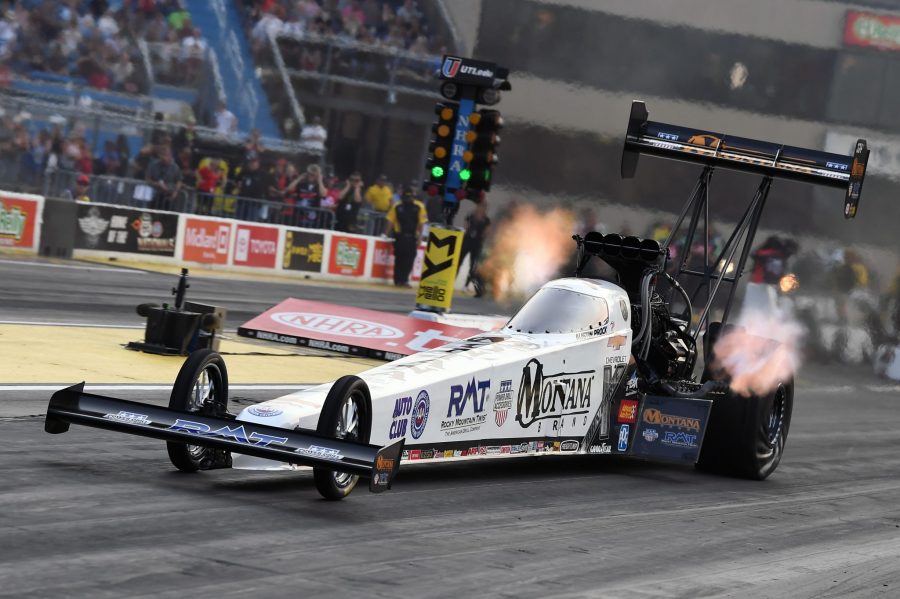 JOLIET, Ill. (May 31, 2019) — Rookie of the Year candidate, Austin Prock and the Montana Brand / Rocky Mountain Twist team are sitting in the No. 5 spot after Friday qualifying at the Route 66 NHRA Nationals at Route 66 Raceway just outside of Chicago. Teammate Brittany Force and the Advance Auto Parts team are currently No. 12, and in Funny Car, John Force and the PEAK Coolant and Motor Oil team are No. 8 with Robert Hight and Automobile Club of Southern California in the No. 13 position.

Prock, who is sitting in the top 10 of the NHRA Mello Yello points standings, had an impressive start to Friday’s qualifying when he ran a solid 3.769-second pass at 321.19 mph. The run would put him in the No. 4 qualifying spot heading into the night session. During what should have been an exciting qualifying round with header flames lit, the third-generation driver had to shut off early after shaking the tires and ran only a 6.920-second pass at 96.89 mph. The session would prove to be difficult for the entire category. With only a few dragsters improving, Prock would move down only one spot into the No. 5 qualifying position. If his position holds, it will be the best qualifying performance of his rookie year.

“Second session, the track was really tricky, a lot of cars didn’t do well on the racetrack but in the first session we made a good, solid pass. We ran a .76 and that tied us for third but (Mike) Salinas got us on mph. Our engine got a little hurt down track so I think that kind of screwed us out of that,” said Prock. “All-in-all a great start to the weekend. We’re fifth so we’ll see what we can do tomorrow and hopefully we’ll run well.”

During the first session at Route 66 Raceway, it was a bit of a wild ride for Force. With cylinders out, his PEAK Coolant and Motor Oil Chevy Camaro made a move and got extremely close to the wall during their 3.973-second pass at 301.40 mph. With no improvement in the second session after rattling the tires and shutting off to run a 7.114-second pass at 88.71 mph, Force would end the night in the No. 8 spot.

“We made a lot of changes during the off weekend, the Indy500 weekend. The car wasn’t right, the steering, we had to come back and go to work on it. Tim Fabrisi and Brian Corradi, they really stayed on top of it, especially Fabrisi. Let me say, boy I think they got it right, everything from the throttle to the steering. I’ve gone to a push break that I’ve never used instead of a pull break, everything is backwards for me but first run was lucky enough to get a .97. Really aggressive on the second run. I wish I would have made it you know but it didn’t so tomorrow’s a new day.”

Before racing got underway, Force and the entire John Force Racing team spent Thursday at the Old World Industries headquarters, the parent company of primary sponsor PEAK Coolant and Motor Oil, where they interacted with employees and brand ambassadors.

“I’m here in Old World Industries’ world. I learned a whole bunch this weekend about the internet, working with Brian Bohlander from PEAK and those internet stars he brought out, the Throtl group, Charles the Humble Mechanic, Freddie Tavarish and Chris Fix, the guy that wears a helmet all the time, I wear a helmet all the time too and I don’t have 5 million followers,” said Force. “They’re really great guys we had a good time with, a great car show at PEAK but it’s time for racing here at Route 66. I’m fighting, I’m gonna get that 150.”

Brittany Force opened qualifying with a clean 3.819-second pass at 320.36 mph in her Advance Auto Parts dragster. The effort would hold over through the second session, which ended with Force having to shut her machine off early after tire shake to run 7.280-seconds at 90.84 mph, and put her in the No. 12 spot.

“A little bit of a rough start for this Advance Auto Parts team coming into Chicago but we’re trying some new things. We’re coming into some hot races, hot tracks, and we’re trying to get this car figured out so we can handle it,” Force said. “We get two more runs tomorrow and hoping to get it figured out and really move up to the top half of the field. We really want to be somewhere in the top five going into race day. We’ll see if we can make those moves tomorrow and win the thing.”

An early shut off for the Auto Club of Southern California Chevy Camaro put a 4.032-second run at 258.67 mph on the board for Hight during the first session. Like his teammates and many of the other competitors, the night session gave the Auto Club team some trouble. Tire shake had Hight back off the throttle early and cross the finish line with a 7.359-second pass at 90.04 mph.

“Not the day we wanted and not the performance we know this Auto Club Chevy can put out. We’ll get it fixed. There’s two more runs tomorrow for us to get what we need,” Hight said. “Jimmy Prock and Chris Cunningham, they’ll get it done. These Auto Club guys will put in the work and we’ll be ready to go.”