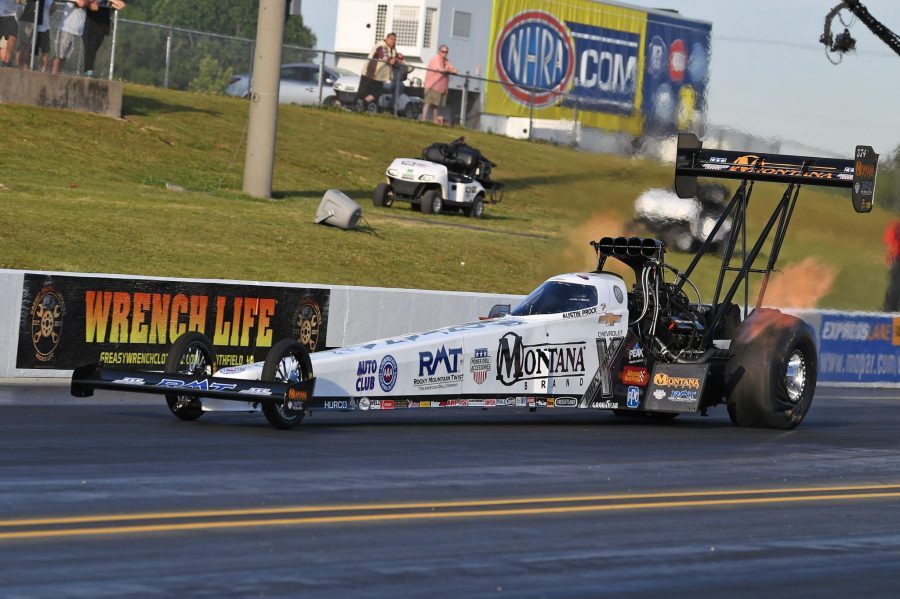 After a much-needed restart weekend at the recent Virginia NHRA Nationals, Prock and the Montana Brand / Rocky Mountain Twist team have set a new pace for their season. With crew chief Mike Green now leading the team, Prock made three consistent qualifying passes in the .80s that landed him the No. 10 spot. During eliminations, Prock kept up the consistency in the first round with a 3.866-second run to beat Richie Crampton for the fourth race day win of his rookie season. After taking the starting line advantage in the quarterfinals, Prock had to pedal his Montana Brand / Rocky Mountain Twist dragster and fell short of the second-round victory. Despite the early exit, Prock will enter the Route 66 NHRA Nationals inside the top ten of the NHRA Mello Yello points standings.

“This Montana Brand / Rocky Mountain Twist team had a great first weekend with my new crew chief Mike Green. We made great progress and Mike, the new crew guys, and Ronnie Thompson all put in work to get this thing down the track,” said Prock. “It was hot out there and they all worked hard. I think we’re headed in the right direction. I’m confident we can go at it again in Chicago.”

Heading to Route 66 Dragway for the first time in his NHRA Mello Yello career, Prock is looking to become the fifth John Force Racing driver to take home the Wally.

“I’m excited to head to Chicago. I feel like we have some momentum going in there. I’ve got great crew chiefs, a solid crew behind me and I feel as if we are all jelling really well,” said Prock. “I grew up racing a few minutes down the road at Grundy County Speedway. Won a handful of races and a championship there. It would be really cool to get it done in front of a possibly familiar crowd.”

Prior to kicking off racing at the Route 66 NHRA Nationals, Prock, along with his three teammates, will be making a special appearance for employees and their families at the Old World Industries headquarters, the parent company of PEAK, in Northbrook, Ill. The annual stop to visit the primary sponsor of sixteen-time Funny Car champion John Force has become an annual tradition for the team.