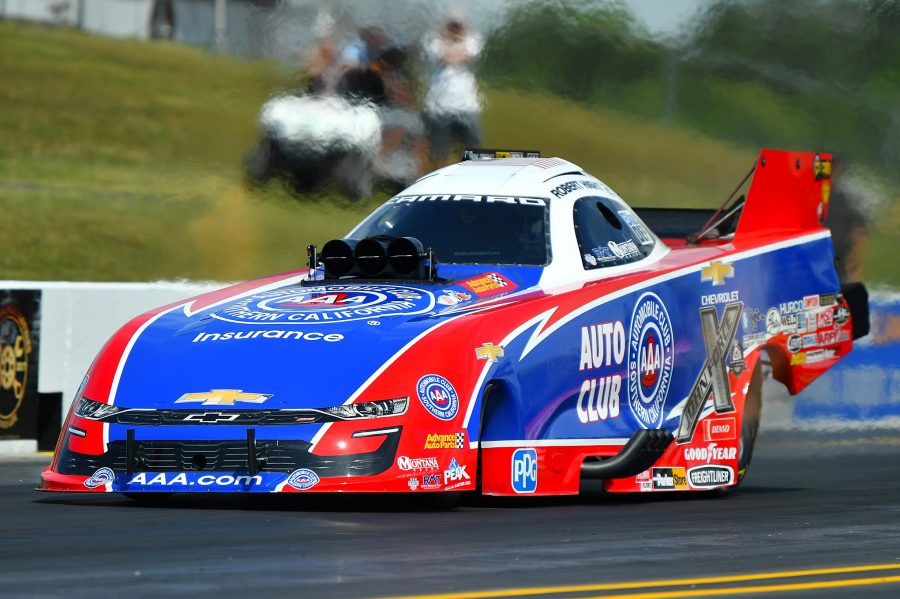 JOLIET, Ill. (May 29, 2019) — Robert Hight and the Automobile Club of Southern California Chevy Camaro SS Funny Car team are gearing up for the Route 66 NHRA Nationals, the ninth event on the 2019 NHRA Mello Yello Series Season schedule, determined to maintain their grip on the Funny Car points lead.

Since the 2019 NHRA season started, Hight and the Auto Club team have commanded the Funny Car class and, with eight races until the Countdown to the Championship, NHRA’s six race playoffs, are showing no signs of losing momentum. The two-time Funny Car world champion has already tallied three wins, one runner-up finish, two semi-final appearances and five No. 1 qualifiers to put him at the top of the pack. At the most recent event, the Virginia NHRA Nationals, Hight had a rare second round exit to rival Ron Capps but only after the two skilled drivers were forced to pedal their 11,000-horsepower hot rods to the finish line.

“We didn’t get this thing in the winner’s circle at Virginia but we left with even more of a points lead so I’m happy with that and with the work my Auto Club guys put in. It was hot out there. The track was hot and we haven’t really seen that since we were in Bristol last year, so going to the next race where we’ll have similar weather, we’ll have some data behind us,” said Hight. “Chicago is the first of our four-in-a-row and I’m looking forward to getting back in the driver’s seat.”

Hight started last year’s Route 66 NHRA Nationals from the bottom of the Funny Car field in the No. 12 spot, but turned things around to power his Chevy Camaro past teammate Courtney Force and 2016 world champion Ron Capps to celebrate in the winner’s circle. It was his first victory at Route 66 Raceway and the first of his 2018 season where he would go onto win three more races and pursue the world championship until the final day of 2018 competition.

“I’m excited to get back to Chicago. I got my first win at the facility there last year and I want to get back in that winner’s circle again this year,” said Hight. “This team and Jimmy Prock and Chris Cunningham have put so much into this car, so winning this again and getting our fourth win of the season would be a great way to kick-off these back-to-back races.”

Before hitting the track to defend his win at the Route 66 NHRA Nationals, Hight, along with his three teammates, will be making a special appearance for employees and their families at the Old World Industries headquarters, the parent company of PEAK, in Northbrook, Ill. The annual stop to visit the primary sponsor of sixteen-time Funny Car champion John Force has become an annual tradition for the team.