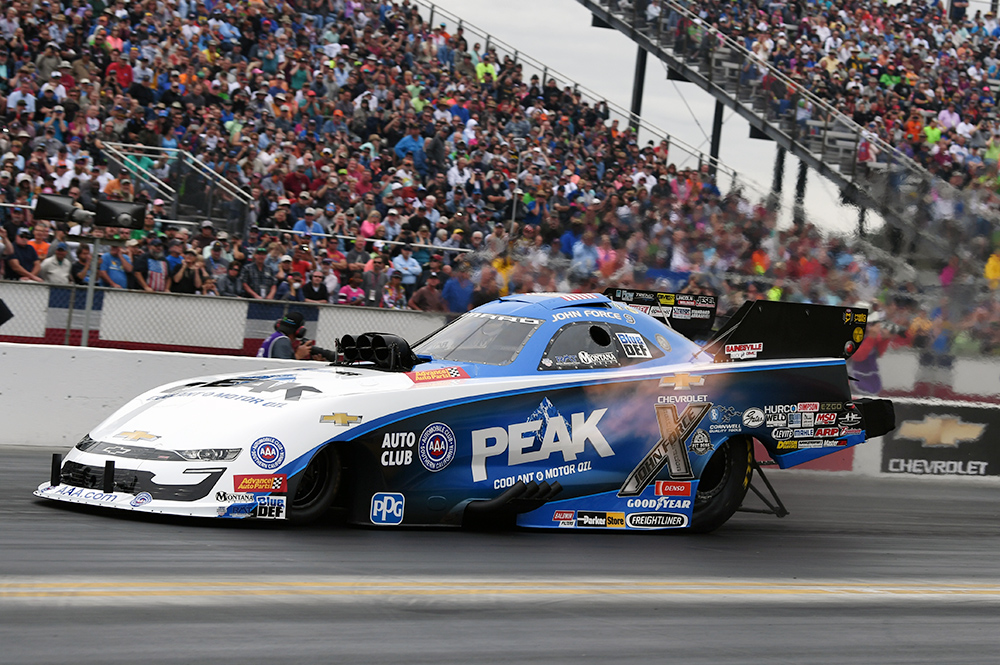 JOLIET, Ill. (May 29, 2019) — Nineteen years after beating Jerry Toliver in the final round of the Route 66 Nationals to become NHRA’s all-time leader in tour victories (breaking out of an 85-win tie with the late Bob Glidden), John Force returns this week to Route 66 Raceway with a chance to reach another professional milestone.

Force is on the precipice of adding to a legacy that already includes 16 series championships, Driver of the Year recognition (1996) and induction into America’s two principal auto racing Halls of Fame. The former big rig truck driver is poised to win his 150th NHRA tour title and this week he has a chance to do it in event staged just 60 miles from the Northbrook, Ill., headquarters of Old World Industries, parent of PEAK Coolant and Motor Oil, sponsor of his 10,000 horsepower, 330 mph Chevrolet Camaro SS Funny Car.

“It’s always good to come back to Chicago,” said Force, who is making a special appearance for employees at the Old World Industries headquarters with his three drivers this prior to racing. “Lots of history here and lots of support from PEAK and all the people at Old World Industries. It’s a good racetrack and I’ve got a good race car.

“(Crew chiefs) Brian Corradi and Dan Hood, they put Courtney (the youngest of Force’s drag racing daughters) in the winners’ circle four times last year and gave her a shot (at the championship). This is the same set-up. We’ve just been working to get the balance right because I’m heavier than she is.”

Through eight races, Force is one of only a handful of pro drivers who hasn’t lost a first-round race. The fact is, but for four losses to teammate and two-time series champ Robert Hight, Force might already have celebrated his 150th victory. He’s been stopped at the semifinals by Hight a trio of times including the season opening Winternationals the 50th anniversary Gatornationals and the SpringNationals, all three of which Hight went onto win. Force also tallied his 157th No. 1 qualifier at the SpringNationals, making history with daughter Brittany Force as the first parent-child duo to sweep the nitro top qualifying positions.

“Bottom line, we keep putting ourselves in a position to win,” he said. “I’m getting more confident every week. I’m using every trick I’ve got to run with these kids but it’s gonna happen.”

Force last won at Route 66 Raceway in 2006, it was his third win at the facility where he’s made six final round appearances, most recently in 2013. The driving legend has five No. 1 qualifiers at the event, making its 21st annual appearance on the NHRA Mello Yello tour.

After making an appearance at the Old World Industries headquarters, Force and daughter, Brittany Force, will also be making a special fan appearance at the Advance Auto Parts store on Thursday, May 30 from 5:00 p.m. to 7:00 p.m. at 2510 W Jefferson Street in Joliet, Ill.