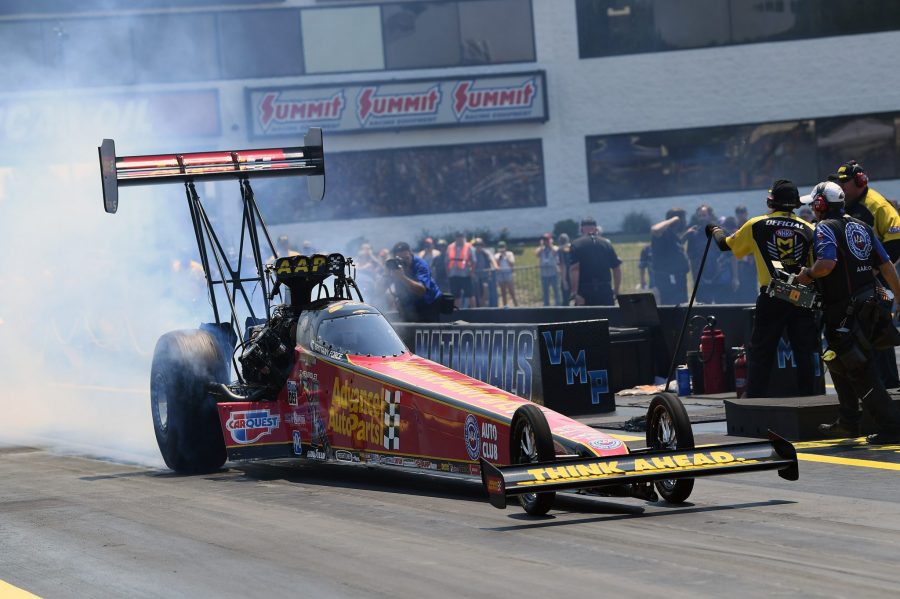 JOLIET, Ill. (May 29, 2019) — Brittany Force and the Advance Auto Parts Top Fuel dragster team are headed to the Route 66 NHRA Nationals, the ninth event on the 2019 NHRA Mello Yello Drag Racing Series Season schedule, eager to keep up the momentum.

Force and the Advance Auto Parts team are now sitting second in the NHRA Mello Yello points standings after defending their 2018 win at the SpringNationals in Houston with a double-up win alongside teammate Robert Hight in April. Accompanying her win are two runner-up finishes and three No. 1 qualifiers including the No. 1 at the SpringNationals that she shared with her father John Force. At the recent event in Richmond, Force had a second-round exit to longtime rival and three-time world champion Antron Brown but left the weekend still sitting No. 2 in the points standings behind reigning Top Fuel world champion, Steve Torrance, who already has three wins this season.

“We made some good passes in Richmond and qualified No. 3 but we didn’t get it done on race day. That’s okay though because we learned a lot in the hot conditions we had and are confident going into the next race,” said Force. “We just had a weekend off and I went to the Indy 500 and supported my brother-in-law, Graham Rahal and spent the weekend with Courtney, we did some fun radio spots for Advance Auto Parts. It was good to have a weekend off and I’m ready to get to Chicago to start the four-in-a-row.”

At last year’s Route 66 NHRA Nationals, Force qualified No. 2 for the fourth time of the season but had an early exit in the first round. Force had previously secured back-to-back No. 1 qualifiers at Route 66 Raceway on 2016 and 2017 and in 2014 was runner-up to Brown.

“I can’t wait to get to Chicago. We never won the thing but we’ve had some luck there in the past. I think that weekend in Richmond definitely helped get us prepared for these hot races, hot race tracks that we’re going into the next few races,” said Force. “Really, it’s working on that tune-up, finding our car in the heat, getting our car down there making consistent runs and going out on race day and winning the thing for Advance Auto Parts.”

Brittany and her legendary father, John Force will be making a special fan appearance at the Advance Auto Parts store on Thursday, May 30 from 5:00 p.m. to 7:00 p.m. at 2510 W Jefferson Street in Joliet, Ill., after the entire John Force Racing team visits PEAK’s parent company, Old World Industries, headquartered in Northbrook Ill. The annual stop to visit the primary sponsor of John Force for an employee only appearance has become an annual tradition for the team.