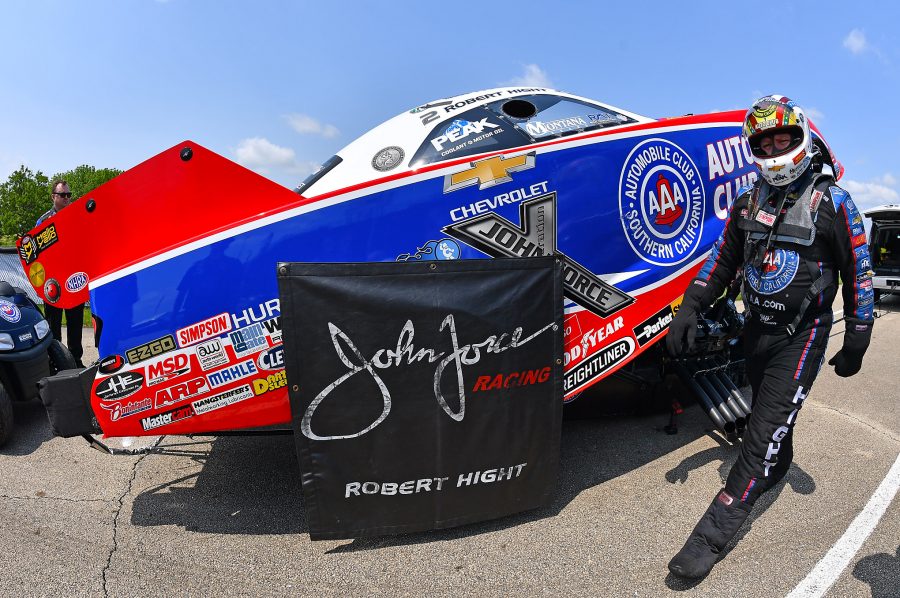 TOPEKA, Kan. (June 6, 2019) — Coming off a No. 1 qualifier and runner-up finish, Robert Hight and the Automobile Club of Southern California Chevrolet Camaro SS team head to the Menards NHRA Heartland Nationals presented by Minties dominating the Funny Car class. With six No. 1 qualifiers, five final round appearances that include three wins, Hight and his Jimmy Prock and Chris Cunningham tuned hot rod are showing early signs of championship contention.

The Auto Club team had an eventful Route 66 Nationals at Route 66 Raceway. Hight kept things interesting through the very last qualifying session where he came in at No. 14 before a stout 3.880-second pass at 334.24 mph put him at the top of the category, a spot he’s been very comfortable at, it was his third No. 1 spot in four events. Race day was no exception to the ups and downs of the weekend. Hight would narrowly escape the first round after smoking the tires against Jim Campbell. The team got a bit of luck in the semifinals when Jack Beckman red lit before reaching the finals and hazing the tires to fall short to Tommy Johnson Jr. who had an engine explosion.

“It was an interesting weekend in Chicago. We were trying some things to try and get ready for the warmer weather that we know is coming. The conditions weren’t what we expected but we were able to turn the weekend into something with a No. 1 qualifying pass under the lights after a weather delay on Saturday and then got the Auto Club Chevy to the finals,” Hight said. “It’s always a bummer when you can’t get the win but we had some luck on our side too which is how it goes sometimes.”

Heading into Topeka, a race Hight has won twice in four finals appearances, Hight expects the same high-level performance the Auto Club team has shown all season long. With three No. 1 qualifiers at the facility and a runner-up finish last season to then teammate Courtney Force on a race day that started with his Chevy Camaro qualified No. 14, the Auto Club team has a history of performing well at Heartland Park.

“We’ve still got some work to do to run in the heat. We’ve made some changes and now we’ve just got to put it all back together again. We’ll see what kind of conditions we have in Topeka,” Hight said. “I have all the faith in this Auto Club team and Jimmy Prock and Chris Cunningham. We’ll be ready to get after it in Topeka.”

Before getting in the seat of his 11,000 horsepower Chevy Camaro, Hight will take in the Kansas City Royals versus Boston Red Sox game on Thursday at 12:15 p.m. Thanks to a partnership with AAA, Hight will be throwing out the first pitch and doing an autograph signing to help promote the ongoing ‘Don’t Drive Intexticated’ campaign. Hight ran a ‘Don’t Drive Intoxicated. Don’t Drive Intexticated.’ branded Funny Car through the 2018 Countdown to the Championship and has a personal connection to the campaign.

“I’m a professional race car driver and even with my skills, my reaction time, I wouldn’t pick up my phone to text in the driver’s seat of my Chevy Silverado at home,” Hight said. “Autumn, my daughter, she’s going to be driving soon and I think it’s such an important message for her to learn and understand now. We need to change bad habits in our drivers now and stop them from developing for the future drivers. AAA and Auto Club are helping to make our roads safer; how could you not support that?”

Qualifying for the Menard’s Heartland Nationals begins on Friday with nitro sessions at 4:45 and 8 p.m. Nitro qualifying continues Saturday with sessions at 12:30 and 3:45 p.m. Eliminations start at 11 a.m. on Sunday. Check out coverage on FS1 Saturday at 10 p.m. ET and Sunday starting with NHRA Sunday Live at noon and concluding with coverage of final eliminations at 5:30 p.m. ET.