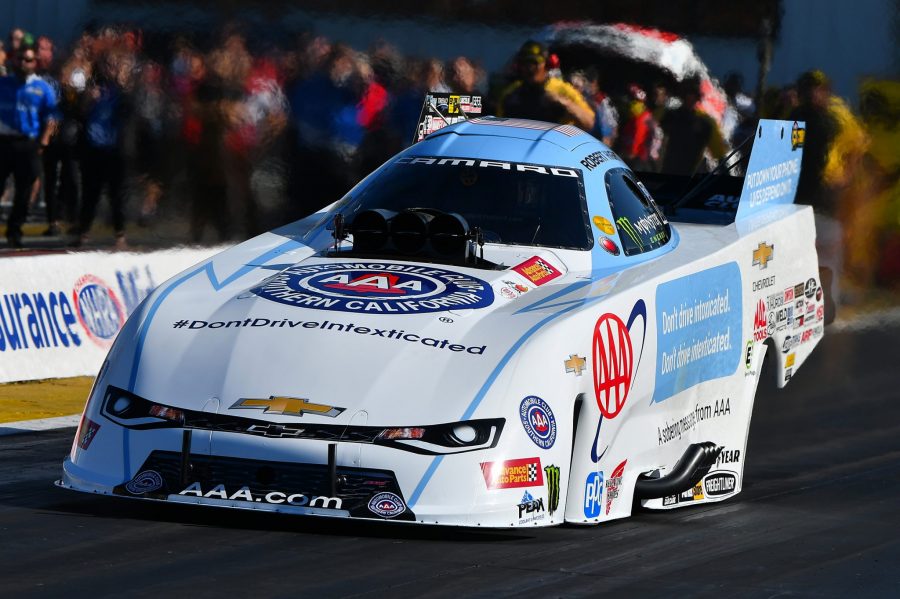 ST. LOUIS (Sept. 22, 2018) — While running low ET three out of the four qualifying sessions, Robert Hight and the AAA Missouri Chevrolet Camaro Funny Car team secured their third No. 1 qualifying position of the season Saturday at the AAA Insurance NHRA Midwest Nationals. Courtney Force landed in the No. 3 position, John Force is ninth and Brittany Force is eighth in Top Fuel.

Not only did Hight earn nine valuable bonus points for being quickest three sessions, the two-time champion was also charged with some extra confidence. Two of those runs came in the first and third sessions, the ones most similar to what the Funny Car field will see on race day.

Hight’s 3.844-second pass in the final qualifying session earned him his 60th No. 1 qualifier of his career but it was the 3.908-second pass from Saturday afternoon that has Hight feeling optimistic going into race day.

“To be honest with you I think the most impressive run of the day was that 3.90 in the heat. That impressed me the most,” Hight said. “That is what we are going to be racing with tomorrow. We aren’t going to have Candyland anymore. You have to have a great race set up and that 3.90 proved that we do. To come out here in the heat and run like that, especially when we only ran 3.92 last night with this AAA Camaro, gives me a lot of confidence.”

The excitement wasn’t reserved for just Hight, his crew chief, the usually even tempered, Jimmy Prock didn’t hide his enthusiasm on the starting line.

“Jimmy is always pushing. Jimmy loves conditions like this. This is where he excels. My Camaro went down the track all four runs in qualifying. That gives you confidence on race day. Everybody is bunched up. This championship is going to be a fight right down to Pomona and I just hope that I am in it.”

The AAA Missouri team struggled during qualifying at the opening event of the Countdown to the Championship in Reading, Pa., last weekend but seemed to find their groove on Sunday, only making a semifinal exit. The momentum has carried over for champs.

“Jimmy is happy. You can just tell when he is searching and trying to find a set up you can see he has a different demeanor. We are not there right now. He has confidence. He doesn’t go to the box a lot. You hear him and (co-crew chief) Chris (Cunningham) on the radio and they have a set-up and a game plan which is working,” explained Hight. “If I wouldn’t have screwed it up last week we had a great shot at winning that race. Tomorrow I have to focus on my driving and doing my best because I have a great race car.”

Hight’s first test on race day will be against Dale Creasey Jr. Hight has a 7-0 win record against Creasy and is 2-0 against him at the AAA Insurance Midwest Nationals, wining in 2010 and 2017. Hight went on to win the race in 2010.

Off the efforts of her 3.881-seocnd pass from Friday night, Courtney Force and her Advance Auto Parts Chevrolet Camaro locked into the No. 3 qualifying position heading into race day at the second of six events in the NHRA Countdown. Force had two clean runs on Saturday running 3.974 seconds during the warmest part of the day and then a 3.923 side-by-side with teammate Robert Hight as the last pair of the day on Saturday evening.

“I think we are finding the consistency we have been lacking,” said Force, who was quickest of Q1 and picked up three points. “Even though we aren’t going into race day in the No. 1 spot we still managed to pick up some bonus points. I feel really confident with this Advance Auto Parts Camaro going into race day. We will be starting from the No. 3 spot and we have a really consistent race car. We are going to have to push hard tomorrow and go some rounds. We are in a great position to get back to the top of the point standings.”

In the hunt for the points lead, Force will first have to get around Jim Campbell, an opponent she is 10-3 against overall, in the first round. Force has defeated Campbell each of the four times they have met this year.

Sixteen-time champion John Force continued to take his PEAK Coolant and Motor Oil Chevy Camaro hot rod from A to B during Saturday’s two qualifying sessions. Force had a solid 4.006-second pass at 314..24 mph to start off the day. In the final session, Force and the PEAK team improved to 3.934-seconds at 327.11 mph to secure the No. 9 qualifying position.

“I have got a race car that is going down the track and we are putting up some consistent times. My sponsors like PEAK, Auto Club, Advance Auto Parts, Monster Energy and Chevrolet are paying us to get them a championship and that is what we are trying to do,” Force said. “This is the Countdown and we are running for a championship. I am happy to see Robert and Courtney running at the top and we are just a little behind them. The Advance Auto Parts dragster made a good run in that last session too. I love racing in St. Louis and the fans have been great. We had another sellout today and we will put on a good show tomorrow. We can make some moves and I am ready for the fight.”

Force will line up with veteran driver Jack Beckman in the first round of eliminations. Force is 14-30 against Beckman but last beat him earlier this season in Chicago.

Brittany Force powered her way into the No. 8 position with her 3.755-second pass at 328.78 mph during the final qualifying session on Saturday. The defending Top Fuel world champion and her Advance Auto Parts Monster Energy dragster team improved on their 3.835-second pass from the first qualifying round. Force and her team will hope the improvement continues into race day as they face Mike Salinas in the first round.

“That last run was a big improvement for us. That was a huge jump from a 3.83 to a 3.75. I knew this Advance Auto Parts team was capable of a run like that. This whole team has worked really hard and we have stayed positive when we have gone through some tough times. What I love about this team is we don’t ever back down. You saw it in that run. I think we will be ready for tomorrow for sure. We are looking for another win and we would love to get it here in St. Louis.”

“I hope the conditions will be similar tomorrow. We have struggled when conditions on race day have been so different from qualifying. That makes it tough for every team. We will be in good shape if we get some conditions tomorrow like we saw today,” Force added.

Eliminations at the AAA Insurance NHRA Midwest Nationals will take place at 11 a.m. at Gateway Motorsports Park. Catch the action starting at 2 p.m. ET on FS1 with live finals.