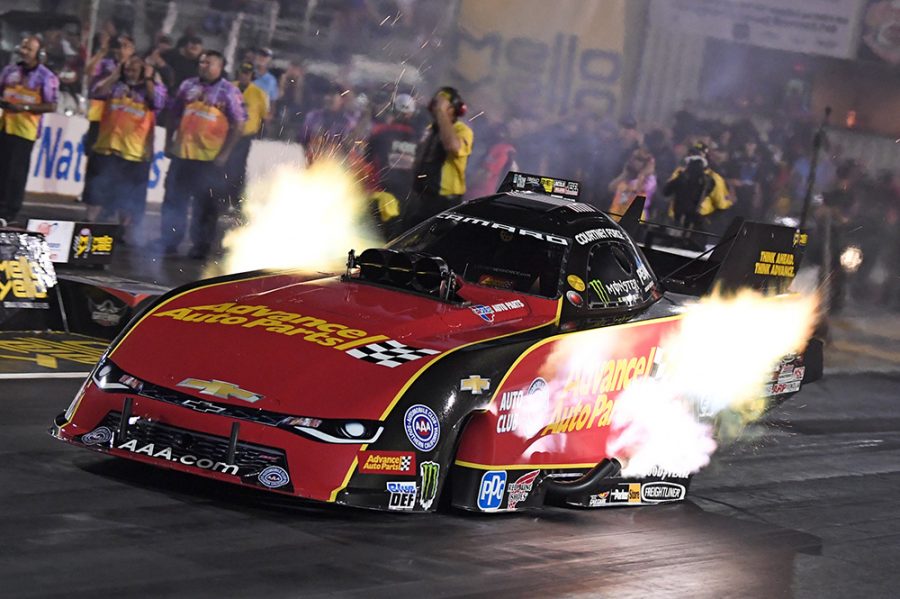 ST. LOUIS (Sept. 21, 2018) — Courtney Force and the Advance Auto Parts team continued their qualifying dominance Friday night at the AAA Missouri NHRA Midwest Nationals racing to the top of the Funny Car class for the provisional No. 1 qualifying position at Gateway Motorsports Park. Robert Hight is currently sixth, John Force is ninth in Funny Car while Brittany Force is 14th in Top Fuel.

In the first qualifying session, Courtney Force, currently third in the Funny Car points standings, and her Advance Auto Parts machine ran a 4.120-second pass at 309.20 mph with cylinders out. Under the lights, Force powered her Chevy Camaro to a stellar 3.881-second run at 331.04 mph to pick up three bonus points and head into Saturday qualifying at the top of the Funny Car class.

“I definitely thought there would be teams that would run around us. The conditions were so good. Obviously, we didn’t have a great run in Q1 when we dropped some holes. Since we were one of the first cars out for Q2 you kind of show the rest of the teams what the track can do,” said Force, who is looking for her first No. 1 qualifier at Gateway Motorsports Park. “Laying down that number honestly, I wasn’t sure if it was going to hold. My crew chief Brian Corradi told me he thought we had a little more in it. That is great to know for the kind of hot rod we have this weekend. For our Advance Auto Parts team to pick up those three bonus points we have to make up for our early exit in Reading. For us it is a great way to start the first day out here at Gateway Motorsports Park.”

Robert Hight and the AAA Missouri team carried their momentum from Reading, Pa., where they strung together three nearly perfect runs on race day, when they ran a 3.957-second pass at 319.83 mph off the trailer on Friday afternoon. They were quickest of the round to earn three valuable bonus points. The day only got better for the defending world champions when they laid down a solid 3.925-seconds at 325.37 mph under the lights at Gateway Motorsports Park to currently hold the No. 6 qualifying session.

“We saw Courtney run 3.88 and we knew the conditions were out there. We were in the right lane which is a little tricky. The good news it we put up a decent number and moved up to the top half. We got three bonus points in the first session and we were hoping to get more bonus points in the second session,” Hight said. “Conditions will be as good or better tomorrow. I have a lot of confidence with how well this Auto Club Camaro is running. I think we can step it up tomorrow.”

After a mishap in the first qualifying session where the parachutes on his PEAK Coolant and Motor Oil Chevrolet Camaro came out prematurely, John Force had a strong run of 3.954-seconds at 327.82 mph during the night session to land him in the No. 9 position.

“We made two good runs today. In the first run we were on a great run and then we had a problem with the parachute. In the second run we wanted to get into the show and be in a position to get aggressive tomorrow,” Force said. “I have a really good race car I think. I am excited for tomorrows qualifying and race day. These guys are working hard and I am going to do my job.”

Brittany Force, in the Advance Auto Parts Monster Energy dragster, started her day with a 3.835-second pass at 317.72 mph that would land her in the No. 14 position. With header flames lit, the defending world champion piloted her dragster to a 3.890 run at 307.02 mph in the second session.

“This Advance Auto Parts Monster Energy team made two decent runs today and there is definitely room for improvement tomorrow. Our odds will get better and it will cool down tomorrow,” Force said. “Our plan is to come out and get two more runs and really step it up there. We want to move up into the top half of the field and get ready for race day.”

Qualifying at the AAA Insurance NHRA Midwest Nationals will continue with the final two sessions Saturday at 3 and 5:30 p.m. Eliminations at Gateway Motorsports Park are slated for 11 a.m. on Sunday.