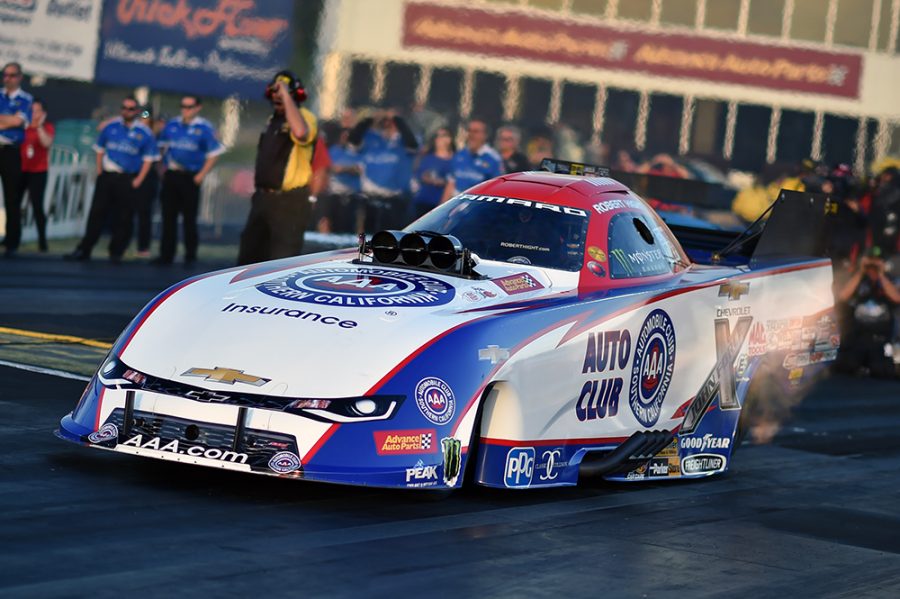 COMMERCE, Ga. (May 4, 2018) — Robert Hight powered his Auto Club of Southern California Chevrolet Camaro SS Funny Car to the provisional No. 1 qualifier at the NHRA Southern Nationals at Atlanta Dragway on Friday night. Courtney Force and her Advance Auto Parts Chevy team are currently in the No. 4 spot, John Force has his PEAK Coolant and Motor Oil Chevy are in the No. 6 spot and in Top Fuel Brittany Force piloted her Monster Energy dragster to the No. 3 spot.

Hight, who has one No. 1 qualifier already this season, laid down a 3.952-second pass at 327.59 mph in the second qualifying session to put him solidly in the No. 1 position. His stellar run came after an early shutoff during his first qualifying try resulting in his crew chief Jimmy Prock making more than a few changes to the reigning world champion’s car.

“Leaving the pits usually Jimmy Prock will give me an idea of what this Auto Club Chevrolet is going to run,” explained Hight. “We changed so many things and normally we don’t do that unless we are testing. My clutch pack that we have had this year has been too aggressive so we decided we are just going to bite the bullet and make the changes here. We had to make big changes tonight and we had no idea what it was going to run. I am pretty impressed with that run. You look at all the other good runs and they were in the right lane. The left lane is a little trickier. To get the No. 1 spot out of the left lane is pretty impressive.”

Despite not knowing what to expect, the veteran driver could tell he was on a good run on a tricky race track and expected to be at the top at the end of the session.

“It left good and we had good early numbers. I am really impressed with the speed. Running 327 mph, I don’t think anyone else in Funny Car even ran 320 mph. I’ll even be surprised if any of these dragsters run that fast,” said Hight, who’s prediction was nearly dead on as only two dragsters breached the 320 mph mark. “We definitely have it hooked up. We probably learned something that will help us down the road. It was a good run. It felt good to see that 3.95 come up on the scoreboard.”

Looking ahead to tomorrow, Hight is optimistic and expects two solid runs with better weather conditions during the day.

“I think it could be a few degrees cooler tomorrow. There might be some clouds. Maybe the track won’t get to 130 degrees like today in Q1. That’s hot. When you are dealing with 10,000 horsepower that kind of heat will really cripple these machines,” Hight added.

Not far behind Hight, teammate Courtney Force went down the track for a 3.987 at 312.64 early in the second qualifying session to put her tentatively in the No. 4 spot.

“The conditions cooled down and the track got a lot better. Our Advanced Auto Parts team went to the top spot temporarily and we ended up getting bumped to No. 4,” said Force.
Neither one of her runs were where she hoped they would be, she coasted across the finish line in the first session and dropped a hole during the second session but Force and her Advance Auto Parts team are sitting in a good position leading into another two rounds of qualifying.

“We didn’t have the run that we wanted in Q1. A lot of teams struggled to get down there that session,” Force explained. “We fixed it up and got ready to go for Q2 but we had a hole out on the end of our run and we had to shut it off early. Our speed went down to 312 mph while running a 3.98 ET. Not a bad run for this team. Conditions will be similar tomorrow but we run earlier so it might be a little harder to run quicker than we did today. We are going to get it fixed up so it doesn’t drop holes down there.”

John Force, who celebrated his 69th birthday at the race track on Friday, ran a 4.042 at 320.81 in the second session, an improvement from his 4.159 at 297.35 in the first session. After a tumultuous start to the season, the 16-time champion is going through the paces with his PEAK Chevy.

“We are going through the process with this engine and we don’t want to push it until we get to know it,” Force said. “We made two runs and they may not have been too exciting but we are sixth in the show right now and it ain’t breaking any parts. We are going to lean on it tomorrow.”

In Top Fuel, reigning world champion Brittany Force occupies the fourth position after her 3.799 pass at 319.60 that came after several delays to create a spectacle of header flames under the lights during the second qualifying session. She bettered her 4.066 pass at 249.81 from the first round.

“We are happy with that run. Atlanta is always a tough track. It is not an easy track to get down. We got down there on that last run which was the best opportunity for us,” Force said. “They had some delays and we got to run a little later under cooler conditions. It went right down there. We ran that 3.79 and that put us third going into tomorrow. I am very satisfied with that and we get two more tomorrow and then we will battle it out on race day.”

The final two qualifying sessions at the NHRA Southern Nationals will take place Saturday at noon and 4 p.m. with eliminations slated for Sunday at 11 a.m.