ROBERT HIGHT HAS NHRA SOUTHERN NATIONALS VICTORY IN HIS SIGHTS 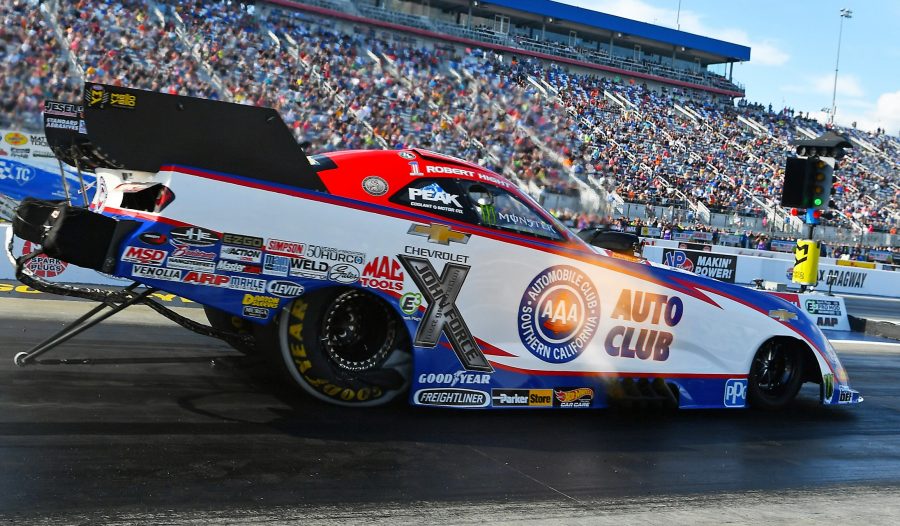 COMMERCE, Ga. (May 2, 2018) — Despite what the NHRA Mello Yello points standings may say, Robert Hight and his Auto Club of Southern California Chevrolet Camaro SS are the Funny Car team to watch out for heading into the NHRA Southern Nationals at Atlanta Dragway. The defending world champion has raced to runner-up finishes at the season opening NHRA Winternationals in Pomona, Calif. and the NHRA SpringNationals outside of Houston where he also secured his first No. 1 qualifier of the season. Currently fifth in points, Hight has set low ET and speed at the NHRA Gatornationals in Gainesville, Fla. and at the NHRA SpringNationals as well as top speed at the Winternationals.

“Jimmy (Prock) and I have been talking the last two races and we are seeing the performance come around and also the consistency,” Hight said. “When the conditions are right and the track is right I don’t think there are many Funny Cars that can run with my Auto Club Camaro. We just have to stay focused and be ready to adapt. Jimmy is the best at getting the most out of a tune-up and I am excited to be the driver in his race car.”

Hight has reason to be excited for the NHRA Southern Nationals and not just because of his pairing with crew chief Jimmy Prock. Hight has visited the final round at the Southern Nationals six out of his 13 appearances at the event, including the first three years of his career, with victories in 2007, 2010 and 2014 and was No. 1 qualifier in 2012.

“I started my career with three straight final rounds at Atlanta Dragway and got my first Southern Nationals win on the third try in 2007,” Hight said, “Since then I have picked up a couple more wins and been to another final on top of that. I think we have been a top three qualifier four or five times. Last year we got to the semifinals and I would love to get another win in Atlanta.”

As the final of three back-to-back races, the NHRA Southern Nationals has Hight dialed in. With appearances at the annual champions appreciation dinner Wednesday thrown by the NHRA Mello Yello Drag Racing Series title sponsor who call Atlanta home and at the Colliflower ParkerStore located in Newnan, Ga. (195 Raymond Hill Rd.) on Thursday from 12:30-1:30 p.m. where he’ll be signing autographs and taking photos with fans with teammate John Force, Hight stayed on the road with his team to be ready for the coming weekend.

“I am looking forward to Atlanta. We have been on the road for three races in a row and I didn’t go back home after Charlotte. I went straight to Atlanta and began focusing on the race,” Hight explained. “We have the champions dinner on Wednesday night and then we have some sponsor appearances on Thursday. It will be a busy week but I can’t wait to get back to the track. We have had a strong race car with this Auto Club Camaro and I have a history of success at the Southern Nationals.”