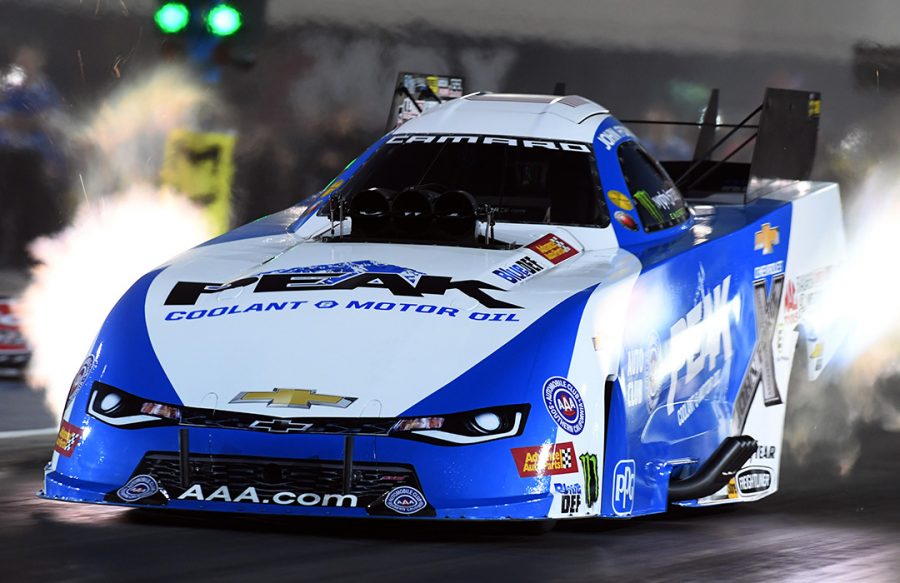 COMMERCE, Ga. (May 2, 2018) — From blown-up to runner-up, John Force has been on the ultimate roller-coaster ride for the first six races of the season. The lows have given the 16-time champion a new appreciation for the sport he has dedicated his life to and he’s looking forward to moving forward and winning some races for his sponsors and fans, starting with the NHRA Southern Nationals at Atlanta Dragway.

“We are getting a tune up now. We are getting a tune up on this PEAK Coolant and Motor Oil Chevrolet Camaro and that means (Brian) Corradi, (Dan) Hood and (Jimmy) Prock can focus 100% on their own cars. Now that my Camaro is going to the other end, we can tune it,” Force said. “We have a lot of work to do. I want to thank the fans they have been so supportive in Houston and Charlotte. They have told me they know we are struggling but they still support us. That means everything.”

Force and his PEAK team suffered engine explosions at each of the first three NHRA Mello Yello Drag Racing Series events, coupled with a pair of hospital visits and a missed opportunity to qualify at the NHRA SpringNationals in Houston, his runner-up performance at the NGK Spark Plugs NHRA Four-Wide Nationals near Charlotte, N.C. was a welcomed relief.

“What I went through in the first four or five races nobody should have to go through,” Force explained. “I have never seen that much carnage. We are digging our way through it. They always say if it doesn’t kill you it will make you stronger. Well it didn’t kill and I am a lot tougher. I really do love the fact that I will never take qualifying for granted again and I will never take getting to a final for granted again.”

Heading to a track where Force has had storied success is just what the winningest driver in NHRA history needs to turn his season around. Force’s seven wins at the facility are the most by a pro driver. From 1992 to 2000 Force was in every final round in Atlanta, a nine-year stint. Even his losses are historic — when he was defeated by Ashley Force-Hood in the finals of 2008, she became the first woman to win an NHRA Funny Car event.

Before looking to make more history, Force will attend the annual champions appreciation dinner Wednesday thrown by the NHRA Mello Yello Drag Racing Series sponsor who call Atlanta home. He will also be signing autographs and taking photos with fans as part of a special appearance at the Colliflower ParkerStore located in Newnan, Ga. (195 Raymond Hill Rd.) on Thursday from 12:30-1:30 p.m. with teammate Robert Hight.