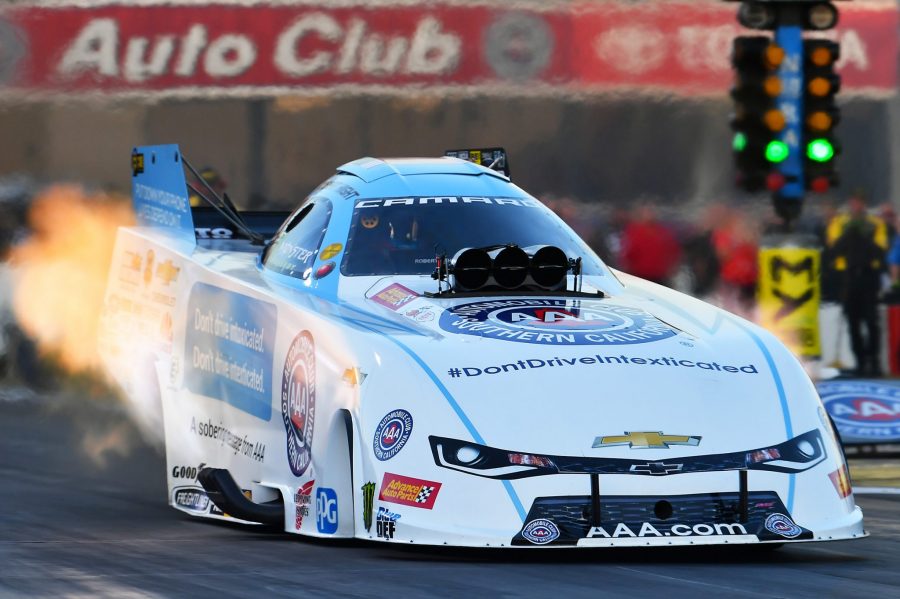 POMONA, Calif. (Nov. 9, 2018) — In the chase for his third world championship, reigning Funny Car champion Robert Hight lined up with J.R. Todd, whom he sat just 74-points behind in second place going into the weekend, for the first qualifying session at the Auto Club Finals in Pomona. Neither Funny Cars made it down the track and Hight coasted to a 6.130-second pass but wasn’t disheartened by the initially sluggish qualifying performance given the overall position he and his Auto Club of Southern California Chevrolet Camaro are in.

“This is what you dream about. At the beginning of the year you want to be in this position at the end of the season with a chance to win the championship,” Hight explained. “This Auto Club Chevy and this team, we are in the hunt. We just have to make it happen. This is a really tricky race track. We will get ‘er tonight I promise.”

That they did. In the second qualifying session, Hight had a stout 3.936 second pass that earned him two bonus points for being third quickest in the session. The little points are important for the two-time world champion as he keeps his hopes alive of defending his title.

“That’s good,” Hight said after his 3.936-second, 325.69 mph run. “I’m proud of Jimmy (Prock) and Chris (Cunningham) and the whole Auto Club team. The big thing is that run puts us solidly in the show and tomorrow we can swing for the fences. It’s gonna be fun. We need to get as many points as we can tomorrow.”

Off the trailer Courtney Force and her Advance Auto Parts Chevrolet Camaro had an impressive 3.965 second pass at 316.15 mph, second only to their running partner Tommy Johnson Jr. to earn them three points. During the second session, Force and her Chevy Camaro got a little too aggressive and finished the day in the No. 7 spot off the efforts of their first run.

“Awesome to see (Brian) Corradi and Dan Hood pull that out in the first run to get us up there in the top half of the field and to currently still be there but definitely want to continue to collect more bonus points. The second run didn’t go as we hoped,” Force said. “Unfortunately, we dropped a cylinder quick and the tires came loose. We’re going figure out what caused that because it shouldn’t have done it. We should have been able to lay down a solid number especially with such great conditions.”

“Luckily, we’ve got another shot at it tomorrow. We’ll be back on the track when it’s great conditions again for Q4. Hopefully we can move up on the ladder tomorrow and get a good shot at it especially in the final qualifying session for our Advance Auto Parts Team,” Force added.

John Force finds himself precariously in the No. 16 qualifying spot of a 19-car field. His PEAK Coolant and Motor Oil Chevy ran only 4.386-seconds in the first qualifying session after his tires got out of the groove and he had to lift off the throttle. In the second session, Force had to shut off early to keep his Chevy in its lane as it struck the tires early.

“We struggled but we’re in the show and we have two more chances (in Q3 and Q4). These kids led by (crew chiefs) Jon Schaffer and Ronnie Thompson, they’ll figure it out and conditions will be better tomorrow. We’ll be fine,” explained Force. “I’ve had a lot of big wins at this track and we’re going to try and get our 150th win Sunday and help Robert go back-to-back (and win his second straight championship).”

Brittany Force, the 2017 Top Fuel world champion, is sitting in the No. 10 qualifying spot after running a 3.772-second pass at 324.28 mph in the second session. Force and her Monster Energy dragster were overly aggressive in the first session and had to shut off early after overpowering the track.

“We got down the track on the Q2 run and put a 3.77 on the board. That was a good run for this Monster Energy team but we are looking for more tomorrow. We have two more qualifying passes going into race day and I am excited,” Force explained. “We won this race last year and wrapped up the championship. This is my home track and I would like to get another win here this weekend. It has been a long season for us and getting in the winner’s circle would do a lot for this team.”

Qualifying at the prestigious Auto Club NHRA Finals will continue with two addition sessions tomorrow at 12:30 and 3:30 p.m. The battle for the Wally is slated to begin Sunday at 11 a.m.