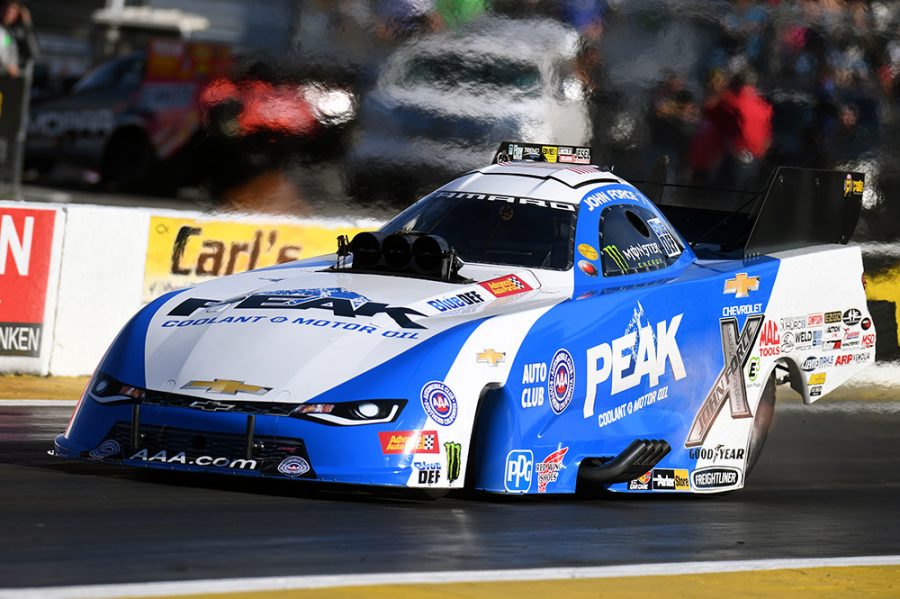 POMONA, Calif. (Nov. 7, 2018) — Although he now knows he can’t win a record 17th NHRA Funny Car title, at least not this season, John Force has embraced his new role as master of mayhem in a championship drama that will conclude Sunday with the 54th renewal of the Auto Club Finals at Auto Club Raceway.
With absolutely no reason to race conservatively, Force looms as a first round nightmare for anyone still in contention for the $500,000 Mello Yello bonus.
“My job now is to take out as many as I can and help Robert get the championship for John Force Racing, Auto Club, PEAK, Advance Auto, Chevrolet and the rest of our sponsors,” said the 149-time tour winner, referring to teammate, protégé and reigning series champion Robert Hight, who enters this week’s race in second place.
At the wheel of a PEAK Coolant and Motor Oil Chevrolet Camaro SS that didn’t hit its stride until past mid-season, Force already has had a playoff impact with first round wins over former champions Matt Hagan, Ron Capps and Jack Beckman that effectively took all three out of the title chase.
“I live for winning,” Force said. “I’m up against all these young guns, but so far I’m holding my own. We’ve got a pretty good hot rod right now. It’s not the quickest but it’ll go down through there and, early in the year, it wouldn’t do that but we battled back. These kids, my crew, led by Jon Schaffer, Ronnie Thompson and Joe Veyette, they’ve worked hard to get it right.”
Force’s resurgence culminated in a July victory in the Dodge Mile-High Nationals at Denver, Colo., making this the 31st season in which he has won at least one tour event. That win, coupled with the fact that he has had more success at Auto Club Raceway than anyone else in history, will make him a formidable foe this week whether it’s the first round or the final.
For the sport’s most prolific winner, this will be his 76th career appearance at the track he calls home, a track that since 1984 has played host to both the season-opening and season-ending events in the NHRA’s Mello Yello Series.
He’s won 16 races and 128 rounds on the track carved out of a parking lot on the backside of the LA County Fairgrounds. An eight-time winner in the Auto Club Finals, Force hasn’t won the finale since 2010 but has been the Funny Car runner-up three times in the last five years.
Notably, he is 20-9 at Pomona against current Countdown drivers not including his teammates – daughter Courtney Force, the regular season champion at the wheel of the Advance Auto Parts Camaro, and Hight, the track record holder for speed in the Auto Club Camaro.
Nitro qualifying for the 54th Auto Club Finals begins with sessions at 1:30 and 3:45 p.m. on Friday. Two more runs at 12:30 and 3:30 p.m. Saturday will set the 16-car lineups for Sunday’s single elimination tournament starting at 11 a.m.
PrevPrevious
NextNext