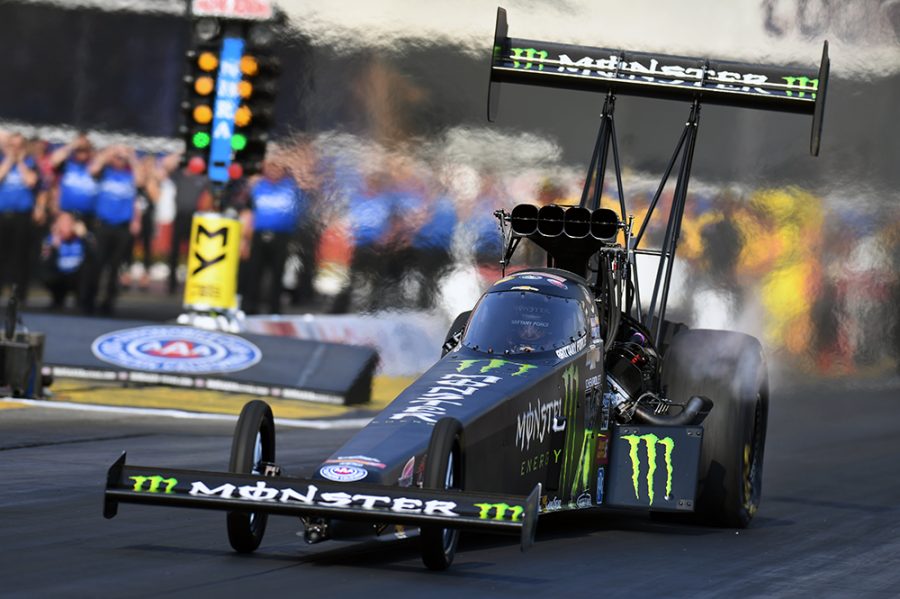 POMONA, Calif. (Nov. 10, 2018) — The John Force Racing teams enter race day at the Auto Club NHRA Finals with Brittany Force leading the way in the No. 3 Top Fuel qualifying position. Robert Hight will continue his Funny Car championship defense from the No. 5 spot with Courtney Force close behind in sixth. Team namesake John Force will chase win number 150 from the tenth spot.

Brittany Force, racing her Monster Energy Top Fuel dragster, had a solid pass of 3.754-seconds at 329.50 mph in the third qualifying session that jumped them into the No. 8 spot with one session left. Force and her crew, led by Brian Husen and Alan Johnson, saw even more improvement in their final qualifying pass when they ran a stout 3.667-seconds at an event and track record speed of 333.58 mph. Their efforts earned them the No. 3 qualifying spot and two qualifying bonus points.

“I knew way before we ran, they said the track had cooled to 82 degrees or something and we sat around and waited and it was getting cooler, darker. I knew it was prime conditions and we pulled it off. I could tell from the launch and the continual pull all the way down the racetrack (that) it was going to be in the high 3.60s. I didn’t think we’d pull off a 3.66, but that’s Alan Johnson and Brian Husen and my Monster Energy team. I’m pumped going into race day. We’re in the No. 3 spot and that’s a good place to be.”

Force will be racing for her second consecutive Auto Club NHRA Finals victory when she lines up against Shawn Reed in the first round. In 2017, Force tallied both the championship victory and the race win to cap off the season. She’ll be looking to cap off the weekend on the same high note.

“Looking back at our success here last year definitely pumps me and the rest of the team up. I know I carried a gut ache last year battling for the championship and this year I don’t have that pressure but we still want to finish strong for all our sponsors,” Force explained. “Winning the championship is something that pushes me when I get in this dragster.”

Robert Hight, who is in pursuit of his third Funny Car championship, moved into the sixth position after the third qualifying session. The Auto Club of Southern California Chevy Camaro didn’t improve but was consistent running 3.944-seconds. With his final qualifying pass, the two-time world champion did improve with a 3.915-second pass at 327.98 mph to land them in the No. 5 qualifying position.

“Overall we did what we needed to do. We control our own destiny tomorrow. If we win the race we are the Mello Yello champions. That is the goal when you start the season. You want to be in a position to win the world championship on the last day of the season,” Hight said. “This Auto Club team will be ready and I feel good about how the car is running. When I talk with Jimmy (Prock) and Chris (Cunningham) I have even more confidence. We have been trying a few minor things to get quicker at certain points on the track and we have figured some things out. Tomorrow will be an exciting day. I am going to get a good night’s sleep and then hopefully get four win-lights tomorrow.”

Hight will race Bob Tasca III, a rival whom he has a 21-7 record against, in the first round of eliminations. If he wins, he could race current points leader J.R. Todd in the quarterfinals and have control of his own fate. Entering race day, Hight is 74 points behind Todd and needs to go three rounds further than him to successfully defend his title.

Courtney Force and her Advance Auto Parts Chevrolet Camaro were the fourth quickest of the third qualifying session when they laid down a 3.920-second pass at 313.58 mph to move up one spot to No. 6 and earn them one bonus point. Their qualifying position would hold through the fourth qualifying run after the Chevy Camaro smoked the tires mid-track.

“We got some bonus points in the first session today so that was good,” Force said. “In the night session the car moved a little inside and when it got down track it hazed the tires. That is frustrating because we really wanted to make a good run and go for that No. 1 qualifier position. The good news is I know this Advance Auto Parts car can be competitive in race day conditions. Dan Hood and Brian Corradi have a good handle on the tune-up and I have a lot of confidence here at Auto Club Raceway at Pomona. It is fun to race here with so many family and friends around. That really motivates me and I will be ready for the first round.”

Force will face Bob Bode in the first round of eliminations as she chases her first Auto Club NHRA Finals victory. Force has a 2-0 advantage over Bode from two meetings in 2016.
John Force and his PEAK Coolant and Motor Oil Chevy Camaro made their first full pass down the race track early Saturday afternoon when they put down a 4.001-second pass that moved them from No. 16 up to No. 11. The final session saw even more improvement from the 16-time champion as he and his team ran 3.975-seconds at 320.36 mph to secure the No. 10 position. However, his own success tomorrow isn’t at the forefront of the legendary driver and team owner’s mind.

“We’ve got a shot at the title with Robert Hight and that’s what everybody wants. That’s why we do this job. You work around the clock. You don’t have a life. Your wife hates you. It’s all for a chance to be the best,” Force said. “J.R. Todd’s a great kid. Connie Kalitta’s a great team owner. So, let’s go have some fun, let’s give ‘em a fight and let’s give the fans what they paid for.”

The final elimination day of the 2018 NHRA Mello Yello Drag Racing season kicks-off at 11 a.m. at Auto Club Raceway in Pomona. Tune into FOX Sports 1 at 4 p.m. ET to catch all the action from the Auto Club NHRA Finals. Be sure to stay tuned in for the post-race show beginning at 7 p.m. ET.