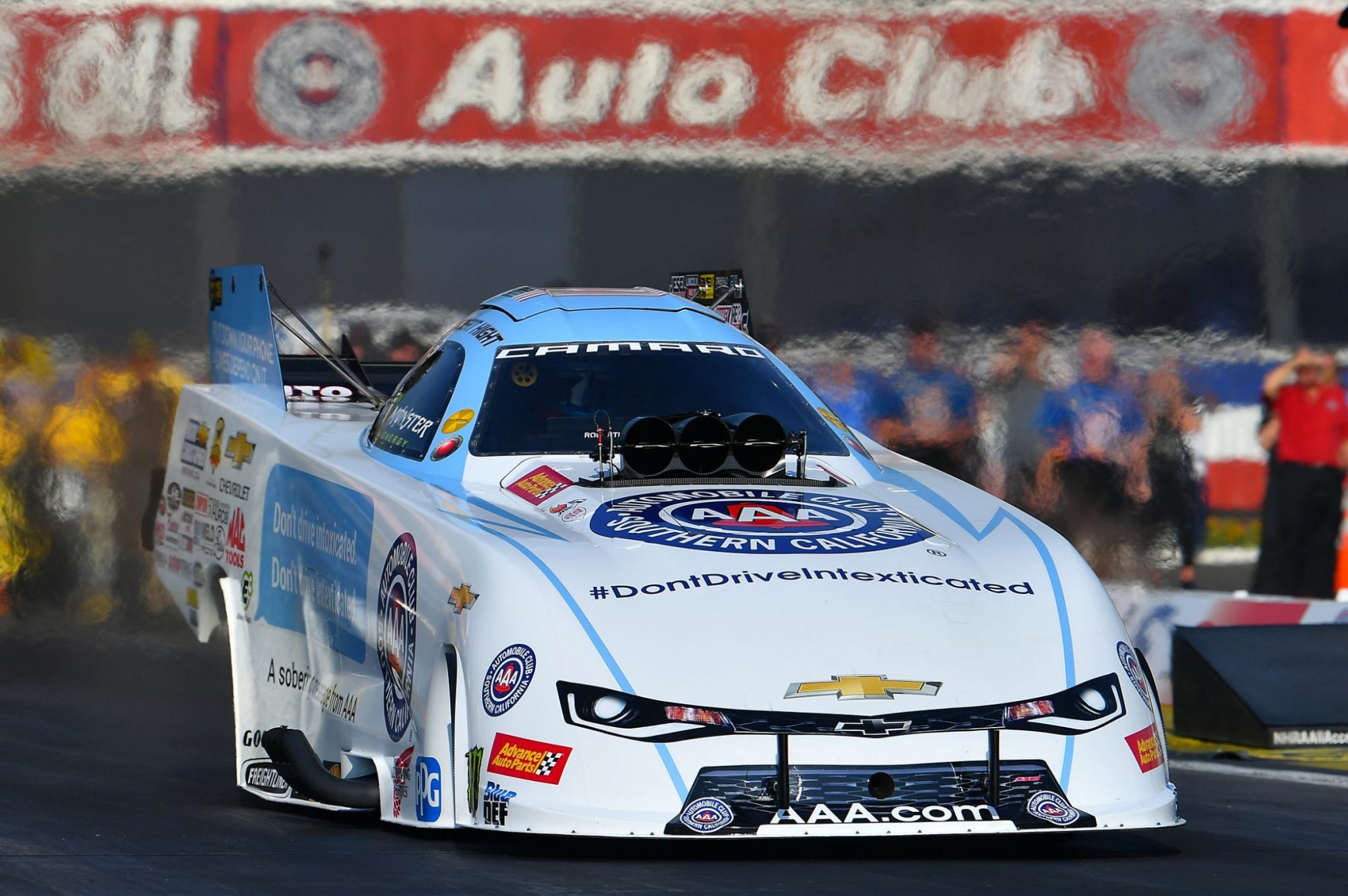 POMONA, Calif. (Nov. 11, 2018) — The finale to the NHRA Mello Drag Racing Series 2018 season may not have ended with the championship celebration many had hoped and predicted but the legendary John Force Racing teams all finished inside the NHRA Mello Yello Drag Racing Series Top 10 for the 33rd time in the team’s 34-year history. Robert Hight came close to a repeat championship coming in second with Courtney Force ending a career best season in the sixth spot. Team namesake and CEO John Force finished ninth and in Top Fuel Brittany Force finished fifth after leading the team at the Auto Club NHRA Finals at Auto Club Raceway in Pomona on Sunday.

Brittany Force and her Monster Energy team took their Top Fuel dragster to the semifinals of the Auto Club NHRA Finals. Force, the No. 3 qualifier, opened eliminations with a victory over Shawn Reed. She powered her dragster to a 3.702-second pass at 331.12 mph, bettering Reed’s 3.803 at 318.84.

Force then lined up with three-time world champion Antron Brown in the quarterfinals where she laid down an impressive 3.687-second pass at 333.00 mph to Brown’s 4.159 at 200.62. The Monster Energy team had their day come to an end when they ran 3.708-seconds at 332.18 mph coming up short against 2018 world champion and eventual event winner Steve Torrence and his 3.705 at 328.78. Force and the Monster Energy team lost by half a car length.

“Not a bad finish. Obviously not where we wanted to end but I’m proud of this team and what we accomplished,” Force said. “We struggled all season long and only had one win, but we definitely turned things around in Reading and then went to the finals in Charlotte. We won some rounds today, so, I’m proud of these guys. We had a great season and we will come back next season and do even better.”

Force’s one win of 2018 came in Houston at the SpringNationals where her Monster Energy team debuted a brand-new dragster after an intense crash at the Winternationals that ruined the dragster her team had built over the off-season. Force secured a No. 1 qualifier with her sister Courtney at the Charlotte Four-Wide Nationals in the spring and the fall Carolina Nationals in Charlotte where she also raced to a runner-up finish. Force now has eight national event wins and 10 No. 1 qualifying positions.

Robert Hight’s bid to repeat as the NHRA Mello Champion was thwarted in the first round of the season-ending Auto Club NHRA Finals. Hight and his Automobile Club of Southern California team smoked the tires at the hit to cross the line at 5.383-seconds and 143.86 mph. The two-time champion’s loss to No. 12 qualifier Bob Tasca III brought a premature end to his duel with points leader J.R. Todd and relegated him to second place in points for the third time in his pro career. It is his 10th Top 5 finish in his 14 pro seasons.

“First, congratulations to J.R. Todd and that DHL team. We gave them a run for the money but we just came up two races short. We controlled our destiny in Las Vegas and today. We just didn’t get it done. We had a great season and won races but we wanted another championship. We had a plan for the first round and it didn’t work out,” Hight explained. “I think we saw that the left lane really wasn’t that good. We were aggressive but we needed to be quick to get lane choice. There are so many Funny Car teams that are elite and we are in that mix. I think we defended our championship well and we will start working on 2019 championship tomorrow.”

Hight and his Auto Club of Southern California Chevy Camaro team earned four event win’s this season, boosting his career total to 45, third-all time behind only boss and teammate John Force and veteran Ron Capps. His first win of the season in Chicago ensured he became the only driver in NHRA history to win a tour event in 14 consecutive seasons to start a career.

Courtney Force faced off against Bob Bode in the first round of eliminations and left no doubt of the Advance Auto Parts Chevy Camaro’s performance when it laid down a 3.941-second pass at 328.78 mph. Bode crossed the line at 5.304-seconds after his Funny Car lost traction. Force’s 2018 NHRA Mello Yello Drag Racing season ended in the quarterfinals when she had a solid side-by-side race with eventual race runner-up Tommy Johnson Jr. Force had a 3.942-second pass at 321.50 mph. It wasn’t quite enough for Johnson Jr.’s 3.913 at 324.90.

“It was a great season for my Advance Auto Parts team. Really proud of everything we accomplished throughout the year. Really proved what we were capable of this entire season. These last six races in the Countdown, we stumbled a little, but I still think we showed how strong we were. We were able to wrap up the year going to second round and having a lot of fun while doing it,” Force said. “To come out sixth in points, that wasn’t our ultimate goal, obviously. I think we have a championship team and a championship race car and I’m just really proud of everything Brian Corradi and Dan Hood have done throughout this season. I’ve learned a lot and it’s been fun working with them and I’m really proud of all that we accomplished.”

Force ends the season sixth in the point standings, a number that does not represent the career best season the winningest female in NHRA Funny Car history had. Force and her Advance Auto Parts team earned four event victories in six final rounds with 11 No. 1 qualifiers and led the points standings for 12 consecutive events.

Although he didn’t get the elusive 150th NHRA tour victory he’s been pursuing since July and even though he finished only ninth in the final driver standings, John Force left Auto Club Raceway Sunday in far better shape than he did after the season-opening Lucas Oil Winternationals contested on the same track.

The 16-time champion began the year outside the Top 10 following car control problems, engine explosions and a crash. He finished Sunday at the Auto Club Finals by beating title contender Tim Wilkerson in the first round before falling in the second to Jack Beckman. That result boosted the 69-year-old veteran’s season record to 25-22, the 33rd year he has won more racing rounds than he’s lost; the 34th year he has finished in the Top 10.

“We do our job to win, that’s what we’re paid to do by Chevrolet and Peak and Monster and Advance and Auto Club,” Force said. “Courtney was on fire all year — being fast. I was on fire, too, just bad luck, call it what you want. Robert got hot at the end and we thought the championship was in reach. But you’ve gotta give credit to J.R. Todd and Kalitta, they pulled it off.

“So we’re already building for next year,” said the driver of the PEAK Coolant and Motor Oil Chevy Camaro. “In the end it’s not just about making the Countdown, it’s about winning the championship. I had a bad year because I was off, but I’m preparing for next year. I want to get in better shape. I’m trying to get healthy.”

The entire John Force Racing team will attend the Mello Yello championship banquet Monday night in the historic Ray Dolby Ballroom at the Hollywood and Highland hotel. The pursuit of their 21st NHRA Mello Yello world championship will begin this week.