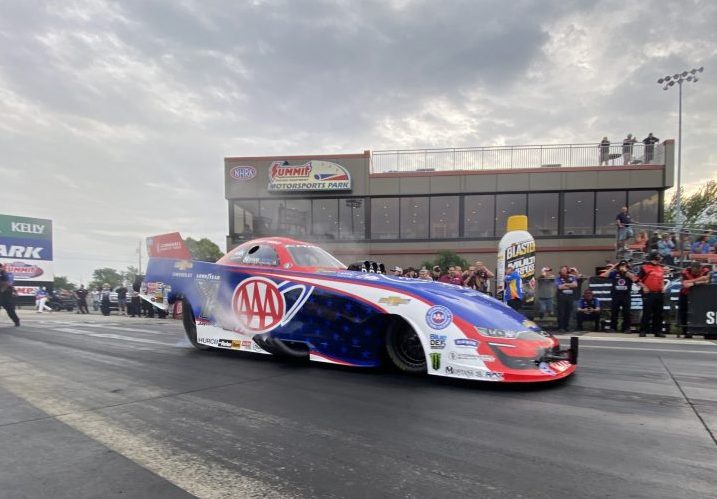 NORWALK, Ohio (June 25, 2021) – After a rain filled day, Robert Hight and the AAA Ohio Chevrolet Camaro and Brittany Force and the Flav-R-Pac dragster, made the most of their Friday night run at the Summit Racing Equipment NHRA Nationals to land in the No. 2 qualifying spot in their respective categories. John Force and the PEAK / BlueDEF PLATINUM Chevy weren’t far behind landing No. 4.

In his third consecutive weekend running his AAA paint scheme, Robert Hight and the AAA Ohio Chevy started their weekend in fine form when they laid down a 3.895-second pass at 327.59 mph to land in the No. 2 qualifying spot.

“Solid run from this AAA team. We have a lot of momentum coming into this race, a win, a runner-up finish, but we still have a lot of work to do. Tonight, was a good start. Now we can go into tomorrow worrying about race day,” Hight said. “I’m confident in this team, Jimmy Prock, Chris Cunningham and these AAA guys are putting in the effort and it’s all coming together.”

Chasing their first win of the season, Brittany Force and her Flav-R-Pac team got off to a solid start powering to a 3.722-second pass at 323.74 mph to land in the No. 2 qualifying spot.

“I’m feeling good after our 3.722 in the first session on Friday night here in Norwalk, Ohio. This Flav-R-Pac / Monster Energy team has had a tough couple of races so to come into the weekend with a killer run has this whole team pumped. Currently in the No. 2 spot and we’re not done yet. Going to get after it again with two runs on Saturday and get ready for race day.”

Coming off a victory at the NHRA New England Nationals, John Force and the PEAK / BlueDEF Chevrolet maintained their performance when they ran a 3.928-second pass at 326.71 mph to open qualifying at Summit Motorsports Park. The solid run puts him fourth in the qualifying order with two runs to go.

“Good day, good run. All the waiting was worth it for the fans. Header flames, fast cars, nitro burning your eyes, definitely a good show once the rained cleared out,” Force said. “Feeling good, feeling good in the car. We have a full day tomorrow, two more runs but I’ve got sponsors coming out too, Cornwell Tools, PEAK and ParkerStore. I’m excited to have them back out here and to be taking care of them.”

Qualifying at the Summit Racing Equipment NHRA Nationals continues Saturday with sessions at 1:15 p.m. and 5:30 p.m. Eliminations are slated for 11 a.m. on Sunday. Television coverage from Summit Motorsports Park begins at 2 p.m. ET on FOX Sports 1 (FS1) and continues on Sunday at 12:30 p.m. Coverage of eliminations will be on FOX Broadcasting Network Sunday at 2 p.m. ET.