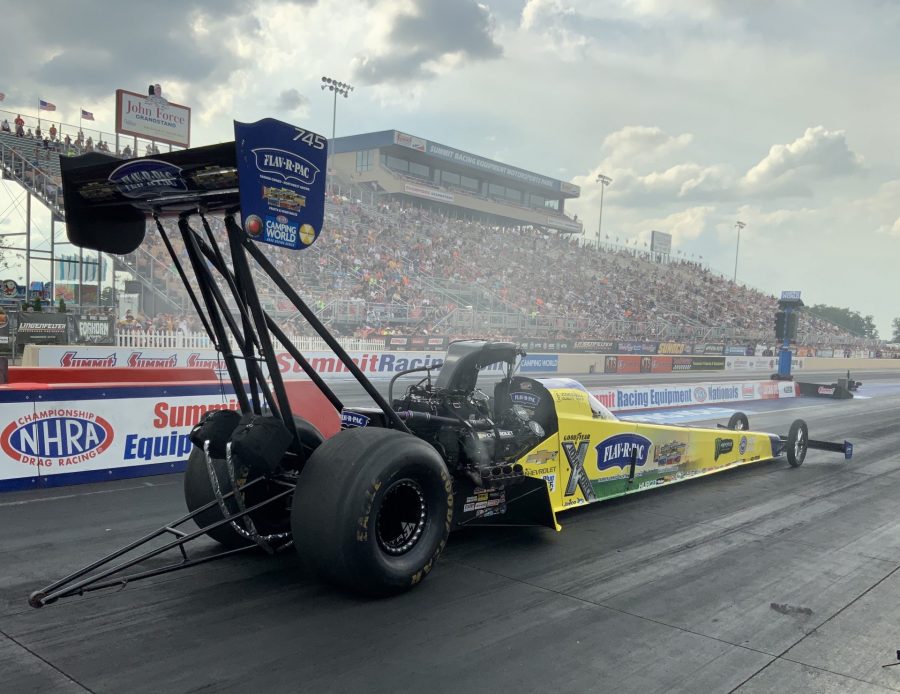 NORWALK, Ohio (June 26, 2021) – The John Force Racing hot rods maintained their performance Saturday at the Summit Racing Equipment NHRA Nationals. Under hotter weather conditions and an even hotter track, Brittany Force with her Flav-R-Pac dragster, Robert Hight with his AAA Ohio Chevrolet Camaro SS and John Force with his PEAK / BlueDEF PLATINUM Chevy each made quality passes to get them ready for race day. Brittany Force and Hight will start eliminations from the No. 2 qualifying spots while John Force will start from No. 4.

Brittany Force and her Flav-R-Pac dragster team dropped a hole on the second qualifying run but were still able to run a 3.809-second pass at 321.81 mph. The Flav-R-Pac team stayed consistent through the final qualifying run laying down an impressive 3.731-second run at 325.69 mph to be second quickest of the session and pick up two additional bonus points. Force will stay No. 2 off her Friday night run of 3.722-seconds at 323.74 mph. It is the fourth straight appearance at Summit Motorsports Park that Force has qualified in the top two.

“Those were three solid runs for this Flav-R-Pac, Monster Energy team after two day of qualifying. This tea is in a good place going into race day tomorrow,” said Force who will be racing Mike Bucher in the first round of eliminations. “We picked up some bonus points and stayed in the No. 2 position. We’re looking for a long day of racing and ultimately a win tomorrow.”

Robert Hight and the AAA Ohio Chevy overpowered the track and had tire smoke during their first run on Saturday, resulting in a 4.562-second run at 186.10 mph. The three-time championship team turned things around in their final qualifying try laying down a 3.911-second pass at 331.20 mph. His run was the top speed of the event so far and quickest of the session earning him three bonus points. Hight maintained his No. 2 qualifying position from his Friday night 3.895-second pass at 327.59 mph.

“This AAA team is looking good for race day. It’s been a pretty good two days of qualifying and we’ve still got our momentum going from the last couple of races,” said Hight who races Bobby Bode first round. “We’ll just keep at it tomorrow, stay focused, work hard and take this AAA Chevy some rounds to get it in the winner’s circle. We’ve got Cornwell Tools out here and ParkerStore and we’d like to get them in the winner’s circle with us.”

On a hot racetrack and with a cylinder out, John Force and his PEAK / BlueDEF Chevy managed to go low second lowest of the second qualifying session and pick up two extra points with their 4.035-second pass at 314.17 mph. In the final session, the PEAK / BlueDEF Chevy ran into trouble and Force had to shut off early to go only 5.504-seconds at 131.91 mph. Force would stay No. 4 off his Friday night run of 3.928-seconds and 326.71 mph.

“It’s been a good weekend for all our teams. We’re all up there in qualifying, Brittany with Flav-R-Pac, Robert with AAA and myself with PEAK and BlueDEF,” said Force who races Chad Green first round. “We’re running good. Danny Hood and Tim Fabrisi, they’ve got this car running and all I need to do is my job. Get up there, stage, cut a good light and hold on.”