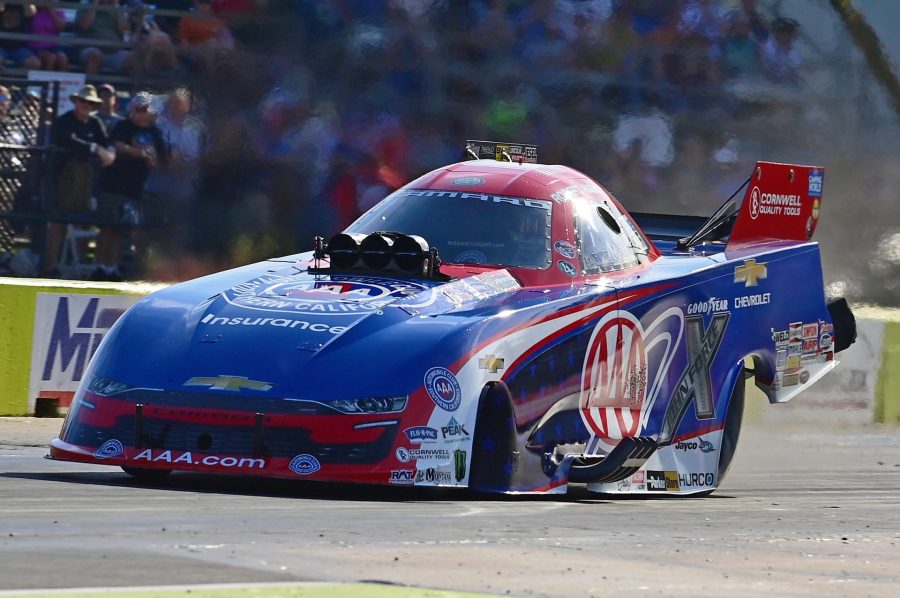 ENNIS, Texas (Oct. 8, 2021) – Back to the classic four run qualifying sessions, the Texas Motorplex turned the Texas NHRA FallNationals Friday qualifying into quite a show. In addition to smoke machines, lights and pyrotechnics, track owner Billy Meyer also gave nitro teams a $15,000 incentive to be No. 1 qualifier. The John Force Racing teams swept those provisional No. 1 spots with Robert Hight in the AAA Texas Chevrolet Camaro SS and Brittany Force in the Monster Energy dragster landing at the top of their respective categories. John Force will be looking for improvement on Saturday from the No. 11 spot.

The Monster Energy team maintained their dominance Friday afternoon with a 3.761-second pass at 325.61 mph to put them in the No. 2 position. After long delays due to on-track mishaps, crew chiefs David Grubnic and Mac Savage threw down in the night session sending Force on a stunning 3.637-second pass at 335.32 mph. If their run holds up through Saturday, they’ll have 11 No. 1s on the year.

“That was a killer run,” Force said. “We were going for mid-3.60s, so when they told me what I ran on the top end, that was really impressive. With David Grubnic and Mac Savage, you can’t put that past them. They’re capable of running crazy numbers and setting records. This Monster Energy / Flav-R-Pac team is off to a good start to this weekend and the great thing is we get two more qualifying runs Saturday.”

Robert Hight and the AAA Texas Chevy Camaro team wasted no time flexing some muscle Friday at the Texas NHRA FallNationals. Hight would handle his Camaro to 3.970-second pass at 324.98 mph in the first qualifying session earning him three bonus qualifying points. There was some confusion and unnecessary excitement on the starting line for Hight in the second session. After a loose fuel line caused a delay, Hight eventually handled his AAA Chevy to a 3.878-second pass at 331.94 mph to keep that No. 1 position. Hight is looking for his seventh No. 1 at the FallNationals and second of the season.

“We had a cluster up there in that second run. We backed up and one of the guys noticed we had a fuel leak. In fact, Jimmy Prock might have burnt himself trying to fix it,” said Hight who picked up six bonus points. “We got it fixed and then we were rolling up, we lit both lights, the tree came down and I wasn’t ready, but we made a good run. It was a confusing run to say the least, but it was what the doctor ordered for this AAA Texas team. We’ve struggled here lately and to go low of each session, it shows we’ve still got it. I think we’ve put too much pressure on ourselves and we’re just going to have some fun from here on out. I really want to thank Billy Meyer and everyone at the track for putting this event on.”

In pursuit of his 10th No. 1 qualifying position at the FallNationals, John Force and the PEAK Chevy team were on a clean run until they hit the top of the track. Force would have to pedal it to a 4.240-second pass at 287.35 mph. Trouble continued for Force in the second session. The PEAK Chevy would cross the finish line in a ball of flames after a late explosion. Force would record a time of 4.122-seconds at 248.43 mph.

“Well, it’s been a while since I’ve had that happen,” Force said. “Not how we want things to go but stuff happens. It’ll be okay, my guys, this PEAK team, they’ll get it fixed up and we’ll be back tomorrow.”

Qualifying at the Texas NHRA FallNationals at Texas Motorplex continues Saturday with two more tries at 1 p.m. and 5 p.m. Eliminations are set for Sunday at 11 a.m. Television coverage continues with a second qualifying show Sunday at 2 p.m. ET followed by eliminations coverage at 3 p.m. ET on FS1.