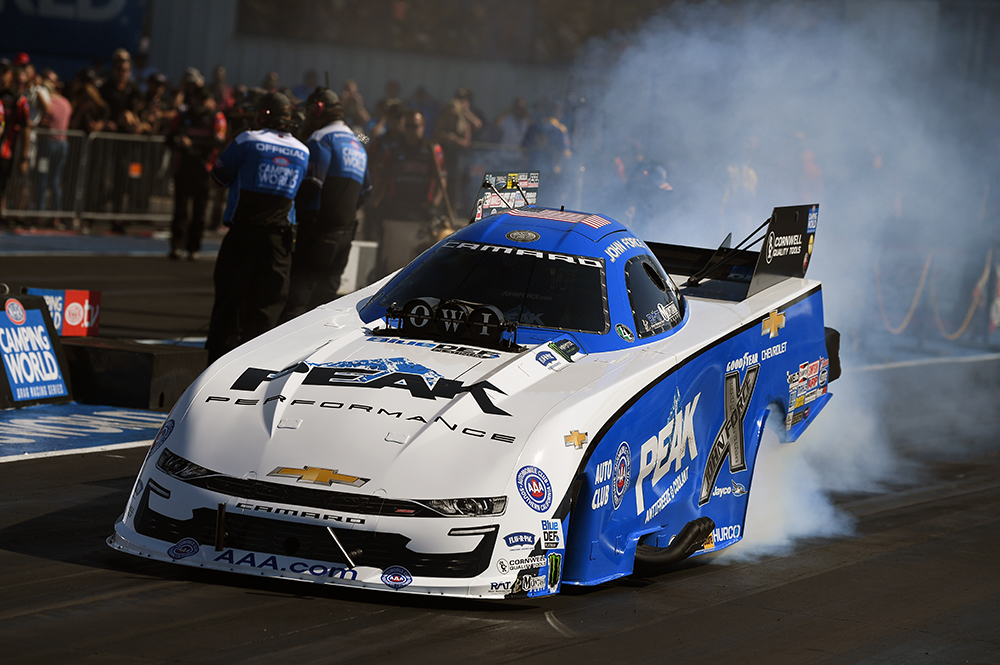 ENNIS, Texas (Oct. 06, 2021) – Sixteen-time NHRA Funny Car World Champion John Force and his PEAK Antifreeze and Coolant Chevrolet Camaro SS are looking for their 17th title. Sitting just 72 points out of the lead in third, the 2021 Camping World Championship is within reach and a win at the upcoming Texas NHRA FallNationals would keep Force as a favorite.

With five final round appearances that included three wins first at the Charlotte Four-Wide, then New England Nationals and sharing the winners circle with daughter Brittany in Topeka at Heartland Motorsports Park and three No. 1 qualifying positions (Charlotte Four-Wide, U.S. Nationals and Carolina Nationals), Force will be trying to win four races in a season for the 14th time in his career while chasing that unprecedented 17th championship.

“We’ve had a great season. Danny Hood, Tim Fabrisi, they’ve worked hard on this PEAK Chevy and it’s paying off. We’re in the hunt, that’s all that I want, to be in the hunt, to have a chance at the championship. That’s all any of us want. It’s what we live for,” Force said. “I’ve just got to keep up, keep taking that PEAK Camaro from A to B and just do my job.”

Force suffered the most serious accident of his career at Dallas in 2007 when, after beating Kenny Bernstein in the second round, his car suffered a tire failure at speed and crashed heavily. Force was transported by air ambulance to Baylor hospital in Dallas for extensive surgery and then spent a month in rehab at the same facility before returning to California to continue his recovery. Doctors told him he wouldn’t race again but he was back in a race car for the start of the 2008 season.

Force has raced to victory at the FallNationals six times, most recently in 2005. One of his goals after recovery was to win again at the Texas Motorplex. Since the crash, he twice has been runner-up – in 2010 and in 2013, the last two years he won the championship.

“I love coming to race in Texas,” said Force who has won in the state 14 times, more than any state outside of California (24). “Billy Meyer, he’s a racer, so he gets it. The show they are putting on this year, well it’s exciting. Not only getting back that second qualifying run on Friday but the whole week, testing Wednesday, getting to interact with the fans on Thursday evening, they’ve had music and entertainment all week long. Then you get NHRA Camping World Drag Racing to cap it all off. Should be a good time.”

The Texas Motorplex is playing host to the “Stampede of Speed” ahead of the Texas NHRA FallNationals. While festivities have been ongoing since Oct. 2nd, Force and his teammates will get the week started Wednesday with the NHRA Camping World Drag Racing Series Open Test Session and then the Fan Fest in downtown Waxahachie on Thursday evening.