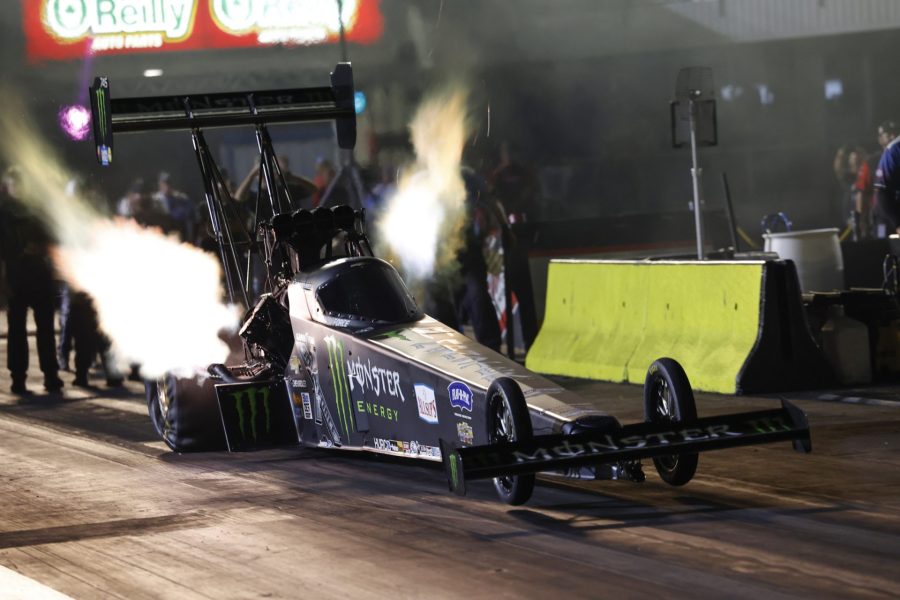 ENNIS, Texas (Oct. 09, 2021) – Brittany Force and the Monster Energy team secured their 11th No. 1 qualifier of the season, 21st of Force’s career Saturday at the Texas NHRA FallNationals at Texas Motorplex just outside of Dallas. Robert Hight led the charge in Funny Car landing the AAA Texas Chevrolet Camaro SS in the No. 1 spot for the second time in 2021 and 53rd time of his career. John Force and the PEAK Antifreeze and Coolant Chevy improved their performance sitting No. 11.

Tire smoke was the theme for the John Force Racing drivers in the third qualifying session. Brittany Force and the Monster Energy dragster coasted to a 9.214-second pass at 76.91 mph after smoking the tires at the starting line. In the final qualifying run of the weekend, Force handled her dragster to a solid 3.756-seconds at 331.04 mph, the third quickest run of the session.

“This Monster Energy / Flav-R-Pac team made some good passes. Even with testing early in the week, I feel like that helped us. We laid some pretty good runs, especially that 3.637 from last night that grabbed us the No. 1 and set us up a good ladder going into race day,” said Force who will face-off with We ran right on our number in that last go. We feel good. We feel confident going into race day. I’m trying to do my job the best that I can. I’ve been struggling a little bit, qualifying brings confidence but it’s nothing compared to going rounds on race day and turning on those win lights.”

“I’m pretty excited, this is our first race with four qualifying runs, which I want to thank the Texas Motorplex for that, four runs is huge. This AAA Chevrolet we were low ET three of the four runs. That gives you a lot of confidence going into Sunday,” said Hight who will race Jeff Arend in the first round of eliminations. “We’ve dug ourselves a hole in the points and we need to win if we want to win a fourth championship this year. We’ve had some performance but no consistency, but Jimmy and Chris, they haven’t forgotten how to race, so I’m excited with the consistency we’ve been showing, I screwed it up in St. Louis so we may have been able to put it together sooner but can’t go back, just have to keep moving our way forward. But I’m excited, I’m excited to get to race day. We haven’t had that many No. 1 qualifiers this year and that’s kind of rare for our team.”

A tough bout of qualifying continued for John Force and the PEAK Chevrolet team in the heat of their third qualifying go. Sitting No. 11, Force’s run was nearly identical to Hight’s, driving into tire smoke at 330 feet for a 4.702-second pass at 173.49 mph. Now No. 13 from his Friday evening 4.122-second pass, Force would improve his performance drastically with a 3.927-second pass 325.30 mph but would only be edged back into the No. 11 spot to race against Alexis DeJoria Sunday morning.

“After last night, today was definitely better. Those PEAK guys, Danny Hood, Tim Fabrisi, they worked hard and worked late last night getting this car ready for today,” Force said. “We had issues early but so did everyone else and we made a solid pass that in Q4. So we’ll just see how tomorrow goes. I know it’s probably going to be exciting, just like this whole week has been here with Billy Meyer at his Texas Motorplex.

Eliminations at the Texas NHRA FallNationals at Texas Motorplex are set for Sunday at 11 a.m. Television coverage continues with a second qualifying show Sunday at 2 p.m. ET followed by eliminations coverage at 3 p.m. ET on FOX Sports 1 (FS1).