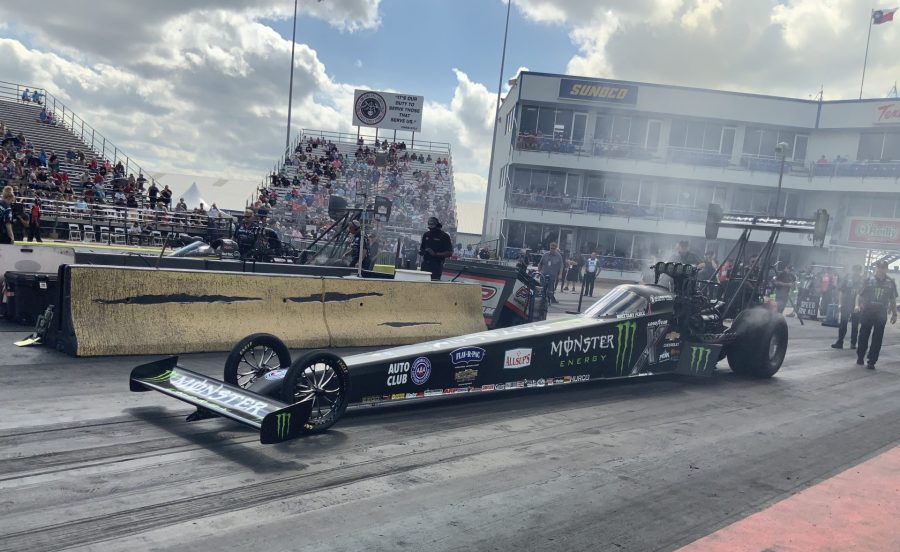 ENNIS, Texas (Oct. 10, 2021) – The week long Stampede of Speed at Texas Motorplex just outside of Dallas was capped off Sunday with the final eliminations of the Texas NHRA FallNationals. Brittany Force and the Monster Energy team led John Force Racing with a semifinal finish while John Force with the PEAK Antifreeze and Coolant and Robert Hight with the AAA Texas Chevrolet Camaros made second round exits.

The victory put Force against 2020 NHRA Rookie of the Year and eventual race winner Justin Ashley in the semifinals. It was a close side-bye-side race with Force laying down a 3.727-second pass at 332.84 mph and Ashley going 3.740 at 325.30 mph. Force would be edged by Ashley on the starting line. He would have a .061-second reaction time while Force would have a .081.

“Tough weekend for this Monster Energy / Flav-R-Pac team. We qualified well, we brought home the $15,000 check for going low Friday nights, got the No. 1 qualifier and then got beat in the semis. Overall, we picked up points and we went some rounds but to lose in the semis the way we did is tough,” Force said. “It was a close side-by-side race, but he had me on the tree. So, we’re going to pack up, go to Bristol and recover from this one.”

Robert Hight and the AAA Texas team found some consistency in qualifying, going low three of the four sessions and earning their second No. 1 of the season 70th of Hight’s career. That consistency continued in the first round when the AAA Chevy went 3.953-seconds at 304.46 mph to defeat Jeff Arend and his 5.951 at 131.13. Hight’s second round match-up with J.R. Todd was a driver’s test. Both hot rods went up in smoke putting Hight and Todd in a pedal fest. Hight’s 5.955-second pass at 220.98 mph wasn’t quite enough to overtake Todd’s 4.796 at 205.19.

“We had something going there for a while. It’s a good sign for these last three races. This AAA team is just focusing on taking it one run at a time and having some fun along the way,” Hight said. “We had put a lot of pressure on ourselves and there’s still pressure, but we need to enjoy ourselves. We know how to race, Jimmy Prock and Chris Cunningham, they know what they’re doing.”

After having to bring out their back-up car due to their Friday night fireball, John Force and the PEAK Chevy were on their game in the first round of eliminations. Force, with a .080-second reaction time, would come out with the win on a hole shot over Alexis DeJoria. The PEAK Camaro went 3.916-seconds at 324.44 mph to DeJoria’s 3.893 at 329.91 with her .110 reaction time. In the second round, Force would face Cruz Pedregon for the 113th time in his career. It would be close race until the PEAK car put a hole out down track that pushed Force towards the centerline. Force would have to let up to run only 4.299-seconds at 225.07 mph to Pedregon’s 3.925 at 329.10.

“A little bit of a tough weekend out for this PEAK Chevrolet. We had some issues but I’m proud of my guys,” Force said. “Had to bring out the back-up car and they had some long nights and early mornings getting it ready. It ran good for a couple laps but had some bad luck with a cylinder going out in that second round. We’ll get it figured out and be ready for Bristol next week.”